Here in Irish America, COVID-19 raises some profound questions for a community already under pressure from lack of immigration. 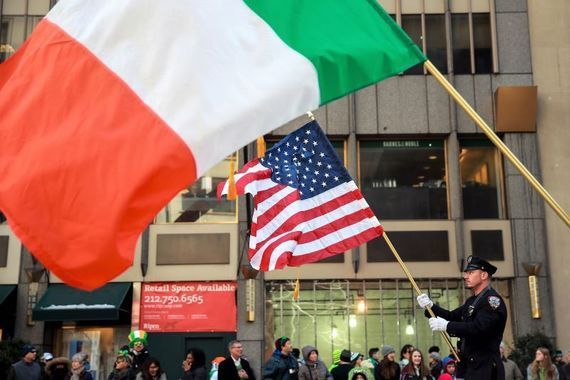 The St. Patrick's Day parade in New York City is just one of many Irish American events ravaged by COVID-19. Getty

The trail of destruction of COVID-19 is unparalleled in its intensity reaching every corner of Earth.

Here in Irish America, it raises some profound questions for a community already under pressure from lack of immigration.

Just this week, the beloved Irish Cottage restaurant in Forest Hills, Queens, a staple for 60 years, announced it was out of business after owner Kathleen McNulty passed away from the dreaded virus.

Son Danny told the Queen’s Chronicle his mother Kathleen, who is survived by three children and three grandchildren, took over in 1986 after her husband died.

“It was hard back then because women in business were treated very, very differently,” Danny said. “Men were very chauvinistic and machismo. She met them tooth and nail.”

Not far away in Rego Park, Woodhaven House, another beloved Irish bar and restaurant, announced it was shuttering.

Read more: How the Irish in America became Republicans

“To our Woodhaven House family, it is with a heavy heart we must inform you that Woodhaven House will not be reopening after this pandemic has passed,” the restaurant said in a statement posted to Facebook.”The last few months have been devastating.”

You can bet for every bar shuttered in Queens there are similar closures in Irish businesses all around the country. Bars, restaurants, gift stores, and Irish goods and services will all be hard hit. We forget the Irish import business to America; the Guinness shirts, Blarney caps, etc., is a massive multi-million dollar business now decimated.

Then there are the social events; the festivals like Milwaukee, which was just canceled, not to mention the major fundraising groups such as the Ireland Funds USA, the Ireland US-Council, the Irish Business Organization, which will be challenged by the inability to even host events, never mind raise money.

There is already a question mark over St. Pat’s Day 2021 and how extensive the celebrations will be, The Gaelic Athletic Association, which runs thousands of fixtures of Irish sports all across America, lies dormant. Theater groups have taken to online productions, a noble effort to keep going. Irish dancing has gone online too.

The Irish advocacy and networking groups have already taken to Zoom but it is a poor substitute. The sociable nature of Irish people makes one-on-one contact almost de rigueur.

What can be done as we watch the decimation of so many businesses and the death of so many dreams?

There is no magic bullet, barring a successful vaccine, which most think is a year away.

What is most important, certainly in my business of publishing, is to keep the name out there, create new circles of friends and keep communicating. In other words, speak out and be spoken to and stay involved by cell phone, Twitter or other social media, if not in person, while awaiting freedom day.

There is an old Irish phrase, “Nil in aon rud ach tamaill” (In everything there is only a while ) In other words, this too will pass.

It is pretty clear what works now, social distancing and wearing masks. Within that context some Irish groups should perhaps consider outside events when restrictions are eased. Six feet and a mask could allow many groups to meet,

Our ancestors faced far worse, yet built a mighty ethnic group with enormous influence in America. Now is no time to give up.

Read more: The Awakening - Ireland and Irish America in the summer of 2021