Donald Trump is now the most dangerous president in American history

US President has just given permission to every Nazi, right-wing group to do their worst. 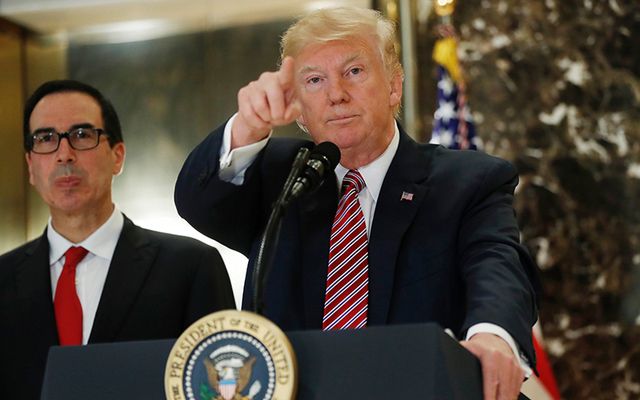 Over 416,000 Americans gave their lives fighting fascism in the Second World War, a number larger than the population of New Orleans.

Donald Trump insulted every one of them and their sacrifice in New York yesterday. He also made the Republican Party the party of Jefferson Davis not Abraham Lincoln.

Trump disgraced himself by defending neo-Nazis who were calling out "Jews will not replace us" and "blood and soil," a Nazi war cry, at Charlottesville on Friday night and Saturday. There were no good people among those marchers, Mr. President. If there had been, they would have walked away on seeing the Nazi flags and hearing those slogans.

"Blood and Soil" (‘Blut und Boden’) was a very important philosophy for Nazi Germany. It referred to Aryan blood and the purity of the men and women who toiled on the land.

Friday night was a mini Nuremberg rally that ended in deaths and injuries. There was no moral equivalence between protesters exercising their First Amendment rights and a Nazi using ISIS tactics to plow a car into innocent opponents. For the president to suggest there was is downright racism.

What he has done is give permission to every Nazi group in America to do their worst and because they know they'll get a nod and a wink from a complicit president.

You know what George W. Bush and Barack Obama would have done – called the stricken mother of  Heather Heyer, the dead woman.

White nationalists, alt-righters, and neo-Nazis marched on Virginia University shouting phrases such as "Jews will not replace us", "Blood and soil" and "White lives matter". (Watch news feature below).

Rupert Murdoch has reportedly been urging Donald Trump to fire racist right-winger Steve Bannon from his White House. Murdoch might rethink and try and get rid of Trump as well. Murdoch is Trump's biggest enabler, his Fox News the equivalent of Pravda for Trump. Every night the station bombards it's "Four legs good, two legs bad" propaganda taken straight from "Animal Farm."

Only Republicans can fire Donald Trump. They hold all the aces in the House and in the Senate. So far they have failed to dirty their hands and confront him. Finally, given Speaker Paul Ryan's tweet condemning the Nazis, they might be getting ready to man up. Impeachment must surely be a necessary evil now.

There are white supremacists within the White House too. Even right wing Glenn Beck has compared Trump advisor Steve Bannon to the Nazi propagandist Joseph Goebbels and called Irish American Bannon “quite possibly the most dangerous guy in all of American politics."

The opinion is shared by many. “I don’t think that White House has a chance of functioning properly as long as there’s a resident lunatic fringe,” Mark Salter, a longtime adviser to Senator John McCain, told The New York Times. Bannon, he said, seems willing to “tolerate something that’s intolerable” in Mr. Trump’s base.

Beck's and Salter’s words have been proven prophetic by events in Charlottesville and the aftermath. There is no doubt Trump’s refusal to condemn the Nazis was out of the Bannon playbook.

Bannon, Trump’s close advisor, spoke to the president before he made his mealy-mouthed remarks and, according to The New York Times’ Maggie Haberman, the best and most informed journalist covering the White House, he convinced Trump not to call out the KKK or white supremacists by name – a position Trump clearly agreed with.

Haberman also revealed that Bannon had spoken to Trump all over that weekend, urging him to hold the line and not attack his base, as Bannon put it. Only when the pressure became too great did Trump relent and overrule Bannon. However, on Tuesday in his press conference, Trump was back on Bannon’s wavelength blaming both sides, declaring protesters were as guilty as Nazis and the KKK.

Trump has rarely read a book but Bannon provides the intellectual underpinning for his racist views.

Bannon is a lover of Fascist writers, which is surprising given his Irish-Catholic upbringing. The KKK and other groups of the same ilk have as much hatred for Catholics as they do Jews or African-Americans.

Worse, Bannon credits his Irish heritage for his views. “I come from a blue-collar, Irish Catholic, pro-Kennedy, pro-union family of Democrats,” says Bannon, by way of explaining his politics. “I wasn’t political until I got into the service and saw how badly Jimmy Carter f---ed things up. I became a huge Reagan admirer. Still am. But what turned me against the whole establishment was coming back from running companies in Asia in 2008 and seeing that Bush had f---ed up as badly as Carter. The whole country was a disaster.”

“Trump,” Bannon proclaimed, “is the leader of a populist uprising … Elites have taken all the upside for themselves and pushed the downside to the working- and middle-class Americans … Trump saw this. The American people saw this. And they have risen up to smash it.”

Steve Bannon's reading reveals much about his fascist, racist mindset

A recent story by the Huffington Post revealed Bannon’s leanings. He loves a book called “The Camp of the Saints,” a French novel that outlines a race war between the “civilized” white West and the evil brown hordes of the so-called East.

In the book, the author describes hordes of Indians trying to conquer white Western Christendom as “thousands of wretched creatures” and “turd-eaters.”

The book is described as “nothing less than a call to arms for the white Christian West, to revive the spirit of the Crusades and steel itself for bloody conflict against the poor black and brown world without and the traitors within.”

Evola spent years in Nazi Germany, where he proudly declared himself to be a “super fascist.”

Today’s Nazis love Evola too. Neo-fascist leader Richard Spencer told the Times he was excited that Bannon knew of Evola.

“It means a tremendous amount,” Spencer said, adding that Trump’s chief counselor “is at least open to them.”

It is incredible that a man with such views has such a close relationship with the President of the United States and worse that a president with a daughter and son-in-law of the Jewish faith tolerates him so openly. America did not vote for accommodation with fascism, Mr. President. The 418,000 Americans who died fighting it in World War II would surely agree.

I feel sorry for many friends of mine, good people, who voted for this man. We live in desperate times and the only hope seems to be that Republicans will remember their Lincoln roots and cast out the racists in their midst