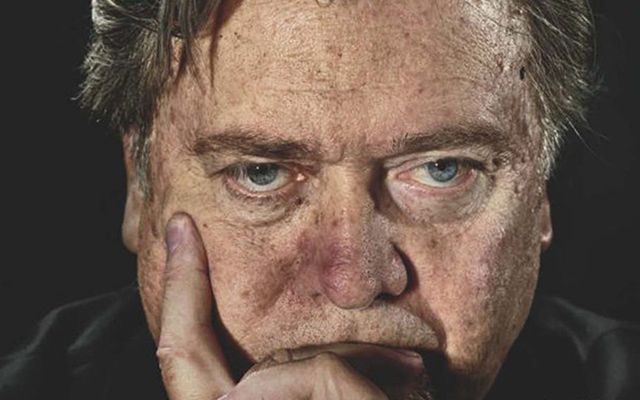 By now, we know President Donald Trump’s rumpled right hand man Steve Bannon grew up amidst humble folk in Virginia.  His family was Irish Catholic and, like generations before them, loyal to the Democratic Party.

This is all explored in depth in one of the hot new books in Washington, Joshua Green’s Devil’s Bargain: Steve Bannon, Donald Trump and the Storming of the Presidency.

TV rights for Devil’s Bargain have already been snatched up, and some believe the attention the book is getting may be bad news for Bannon.

“These are dangerous days for Stephen Bannon, President Trump’s brain,” Elizabeth Williamson wrote last week in The New York Times. She adds that Devil’s Bargain “portrays the president as the empty vessel into which Mr. Bannon poured his ideology and agenda, propelling the two of them into the White House.”

You know what that means: “That’s made the empty vessel very angry.”

God forbid we see what happens when President Trump gets his knickers in a twist.

But let’s get back to Virginia and young Steve Bannon, who was born in 1953, so was at the impressionable age of seven when a certain Irish Catholic from Boston announced he was running for president.

The Bannon family, according to Green’s book, “like many conservative Irish Catholic families, were captivated by…John F. Kennedy.”

Steve’s younger brother Chris adds, “We were Kennedy freaks.  My dad knocked on doors for Kennedy.  Every Irish kid thinks he wants to be Jack Kennedy, right?”

The funny thing here is not that right-wing warrior Steve Bannon grew up in a JFK-loving family.  After all, JFK never really was the liberal dream so many starry-eyed Democrats liked to believe he was.  (Pundit Ira Stoll actually wrote a book entitled JFK: Conservative.)

No, the funny thing here is that the devoutly Catholic Bannon watched lovingly as JFK attempted to become the first Catholic in the White House, and yet apparently learned nothing about, well, being Catholic in America.

John F Kennedy giving his inauguration speech as the first Catholic in the White House.

Because right next door to Bannon’s home state is West Virginia.  In 1960, West Virginia was a crucial test for JFK.  Here’s how JFK’s father Joe put it, in a letter: “(In) West Virginia…the Catholics total around three or four percent. They may use the religious issue there and it may be very, very tough.”

Ya think?  You see, back in those days, when Steve Bannon was young, some people believed American culture would collapse if certain folks made it all the way to the White House.  It would mark the end of civilization as we know it, because, well, let’s be honest, some religions -- some people -- are simply superior to others.

Early on, Kennedy was far ahead of his Democratic primary opponents in West Virginia by a 4-to-1 margin.  But once the voting actually began, polls had him losing big time.  Kennedy is said to have asked a West Virginia operative what the heck was going on.

“No one in West Virginia knew you were a Catholic in December. Now they know,” was the response.

And yet, JFK ultimately won over those skeptical Protestants.  So, what did the Bannon family do?  Celebrate the withering of anti-Catholic bigotry?  Go out and convince the rest of America that it’s kind of mean -- even un-American -- to keep people outside the walls of power?

No, they retreated into a kind of medieval style of Catholicism -- Tridentine, they call it -- that basically looks out at the world and sees a hellish apocalypse.  Funny, that’s what JFK’s anti-Catholic enemies envisioned once a Papist was in the White House.

Apparently, irony is not part of the Latin Mass.

No wonder this week a Vatican-backed magazine bashed Bannon’s ilk for their “apocalyptic” worldview.  Because it’s kind of, you know, un-Christian.