There are not “many sides,” it’s domestic terrorism, Trump must say so. 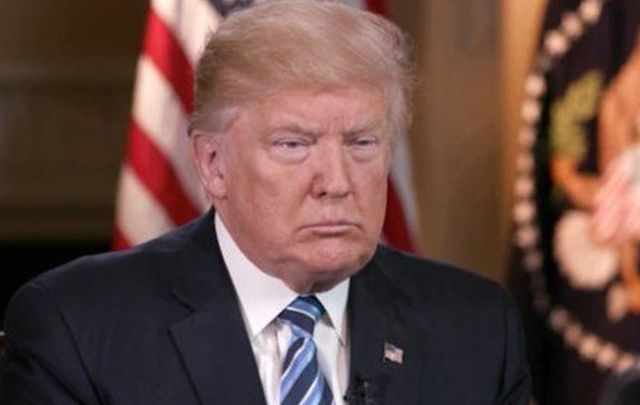 President Donald Trump, who blasted "all sides" after a Unite the Right protest in Charlottesville, Va., ended in violence. NBC still.

Donald Trump has called Mexicans rapists. He has called Muslims terrorists. But when confronted with homegrown white nationalists he claims there are “many sides” to the issue.

Really? Your grandparent’s generation didn’t see “many sides” to the Nazi menace. They saw their own side and they saw Hitler’s and they picked one. That was all.

So why couldn’t Trump call evil by its name? These were white supremacists and neo-Nazis and this was domestic terrorism. How could it be controversial to say so? Former Vice President Joe Biden put it simply, tweeting:

If you voted for Donald Trump you had no choice but to sit uncomfortably for half the day yesterday waiting for him to utter his disgraceful equivocation about was to blame for the horrific scenes in Charlottesville.

It’s not the first time that Trump has failed to forcefully condemn his support from white supremacists. During the run up to his election in 2016 he was asked to disavow his endorsement by David Duke. Finally confronted on camera Trump sheepishly said: “David Duke endorsed me? OK. All right. I disavow, OK?”

Yes, it is kind of interesting. Spencer is not alone in noting Trump’s failure to directly condemn white nationalism and its poisonous leaders. That’s why this weekend Nazi’s were marching though Virginia wearing Trump’s red Make America Great Again hats and shouting “Heil Trump!”

Donald Trump does not dare name the white supremacists in #Charlottesville today. But they name him: "Heil Trump!" pic.twitter.com/sFzlvwtwBg

Yesterday Spencer held his Unite the Right march in Charlottesville where violence erupted when a 20-year-old white supremacist drove his car at speed into anti-Nazi protesters, killing one and injuring dozens.

The previous night hundreds of neo-Nazi’s carrying lit torches marched through the University of Virginia to protest a plan to remove a statue of the Confederate General Robert E. Lee from a city park.

“Jew will not replace us,” they shouted. “Blood and land!” was another sinister chant.

Hundreds of white supremacists marched without hoods or sheets hiding their identities. Emboldened by the recent anti-immigrant, anti-Muslim, anti-gay rhetoric of the Trump administration, under the direction of white nationalist Steve Bannon, they clearly feel the time has come to emerge into the light unchallenged, making their numbers and their agenda known to the nation and the world. In the United States of America, in 2017.

America. August, 2017. The soldiers buried above the beaches in Normandy must be wondering why the fuck they bothered. pic.twitter.com/2S2TZQwv0G

But yesterday Trump ostentatiously refused to say the words “white supremacist” or condemn their leaders by name. Instead he weaselly blasted “all sides” - and this after one of their number had killed and injured anti-Nazi protesters.

Meanwhile, Attorney General Jeff Sessions also failed to mention the protestors were motivated by racism or to call them what they are, white nationalists:

“We stand united behind the President in condemning the violence in Charlottesville and any message of hate and intolerance,” Sessions said in a statement. “This violence is totally contrary to American values and can never be tolerated.”

This isn’t condemnation, this is boilerplate. Where did Sessions think “this violence” came from? And who did he think it was it directed at? The nation’s top cop was uncharacteristically silent, leaving cowed Republican leaders with no choice but to call on him and the president to investigate the horrifying scenes in Charlottesville as the work of white supremacists.

Having led an election where he targeted multiple ethnicities with relish, Trump’s refusal to identify just who was behind Charlottesville is utterly indefensible.

In a signing statement yesterday Trump was point blank asked by the press if he wanted the support of white nationalists. He had an opportunity to disavow them once and for all but he refused to take it, walking away in total silence.

Pres. Trump ignores shouted question after remarks on Charlottesville: "Do you want the support of these white nationalist groups?" pic.twitter.com/qogS0RCM05

LGBT people know, African Americans know, Jewish people know that in the silence of world leaders, the vulnerable disappear. This is not a small matter. This matters profoundly.

So make no mistake. Today was the worst day in the Trump administrations’ ugly history. It will be the day that defines it. To fail to call this growing evil by its name is not only egregious, it’s frankly sinister.

If you have children, fear for their futures now. We have discerned the true profile of the Trump era this weekend and it is the most un-American vision that the nation has ever seen.