Ireland largely threw its support behind Italy as it took on England in the Euro 2020 final. 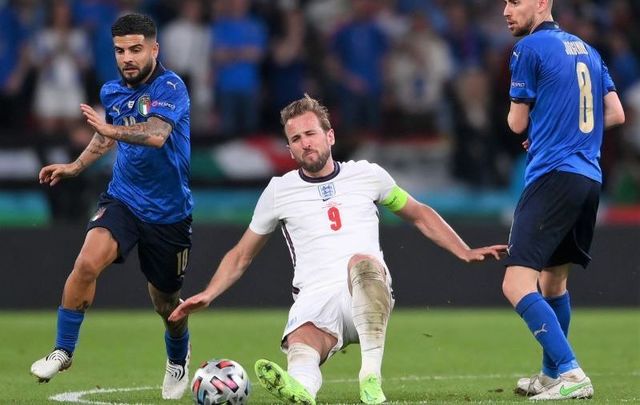 July 11, 2021: Harry Kane of England is challenged by Lorenzo Insigne and Jorginho of Italy during the UEFA Euro 2020 Championship Final between Italy and England at Wembley Stadium in London, England. Getty Images

The complex relationship between the British and the Irish was never more evident than in the run-up to the European Cup final between England and Italy on Sunday.

Many parts of Ireland featured homes flying Italian flags. In press interviews, Irish men and women in the street made clear their support for Italy.

But many felt otherwise, including Taoiseach Michael Martin and Foreign Minister Simon Coveney, who both expressed support for an English victory. After the game, many Irish interviewed said they felt bad for England’s loss via penalty kicks, and it was easy to see why.

Ireland’s nearest neighbor went daft in the week before the final, with some comments way over the top such as comparing their team’s manager Gareth Southgate favorably to Winston Churchill.

In Ireland, there was a far more complex reaction. Delight in England's difficulties has become a staple for many, especially given the British arrogance on issues such as Brexit and the Northern Irish Protocol.

Many Irish believed the British would have become unbearable if they had won the European Championship. Rule Britannia and British jingoism can rise swiftly to the surface given half a chance. There is nothing worse than the fake patriotism whipped up by the notorious tabloid press on such occasions.

There’s also the historic legacy of 800 years of war and occupation. Ironically, Sunday’s game took place exactly 100 years ago to the day the truce in the Irish War of Independence took place. That’s why many Irish were conflicted.

England’s tale of woe has been tailor-made for those who despise the old enemy. Not since 1966 has an English team won a major trophy, and the 55-year-old drought was set to continue.

Like a remake of Return of the Zombies, England would lose out on penalty kicks, their Achilles heel on so many occasions before.

On the other hand, at least four of the English team has Irish roots and two of them had actually played at underage level for Ireland before declaring for Britain.

The success of the team also meant that the plain folk of Britain finally caught a break. One could understand the great pent-up feelings of emotion.

Like every other country, England has felt the sting of the coronavirus and the locked up and locked down era it ushered in. Italy suffered greatly too in the early months of the pandemic.

Though football was played during those awful times, it was behind closed doors and with no crowds, creating an atmosphere more like a funeral than a football extravaganza.

With the Covid-19 siege lifted for now, both teams in the final came to represent the rebirth of the field of dreams, the opportunity to win one of soccer’s major trophies and set their country alight after trying times.

In the end, it was the Italians who won out, but even Irish opponents of all things English had to admit this English soccer side was a great representative for their country. Outspoken on racial issues with a manager who conducted himself with rare class and poise, they were a unique set of players and coaches.

Of course, none of that meant anything to those who in Ireland who celebrated the Azzurri win with great vim and vigor. To them, England will always be the old enemy even if Bambi was manager and Prince Charming center forward.

Luckily these days the battles are on football fields, not battlegrounds. It’s great to see sports back!