Up the Kingdom! Kerry brothers go viral after appearing at Euro 2020

Co Kerry brothers Seamus and Niall O'Connor were seen sporting the iconic green and gold during wild celebrations after Italy's penalty shootout victory over Spain in the semi-finals of Euro 2020. 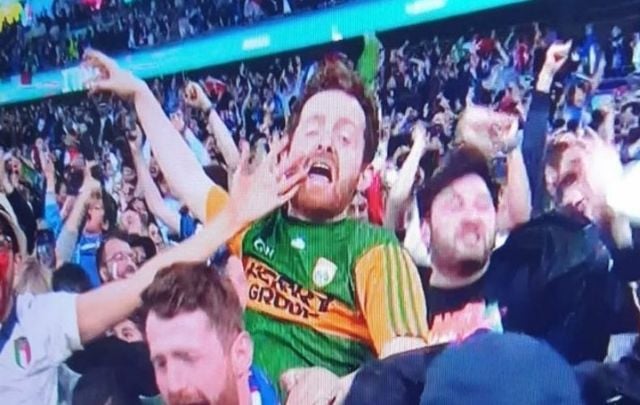 One of the O'Connor twins celebrating during Italy's win over Spain on Tuesday night. TG4 Twitter/RTÉ 2

Two Kerry GAA supporters have gone viral after they were spotted amongst a crowd of ecstatic Italian fans at Wembley Stadium during the Euro 2020 soccer championships.

Twin brothers Seamus and Niall O'Connor were seen sporting the iconic green and gold of Kerry during wild celebrations after Italy's penalty shootout victory over Spain in the semi-finals of Euro 2020.

Images of the two brothers spread like wildfire on Irish Twitter after Tuesday night's game in London, leading to an attempt to track them down.

The brothers, from Brosna in County Kerry, eventually joined Ray D'Arcy on RTÉ Radio One to talk about how they came to be among a group of Italian ultras.

"We were in with the Spanish originally, but we met the Italians going in. They were a bit better craic so we rocked in with them," Niall O'Connor told D'Arcy.

"They knew we were bandwagoning a bit with them, but they were right up for it. They were great craic as well."

Kerry Abú ???
There were a couple of Kerry men spotted at last night's #EURO2020 #ITAESP game supporting the Italian's as they're "better craic". ?@RadioRayRTE tracked them down and chatted to Seamus & Niall O'Connor about their night in Wembley. pic.twitter.com/B09QGzdt9q

Italy prevailed over Spain in a dramatic penalty shootout, prompting Italian players to rush toward their delirious supporters behind the goal, including the two brothers clad in the green and gold of Kerry rather than the blue of Italy.

They said that Italian center back Leonardo Bonucci ran toward them following the shootout but quickly moved along when he realized that they were not, in fact, Italian.

"We got a great view actually. Bonucci ran over at the end as well, which was deadly craic.

"Then he realized we weren't Italian and left," Niall said amid gales of laughter.

The pair told D'Arcy that their phones had been "blowing up" ever since they were spotted at the game, while several Irish celebrities also commented on the viral footage.

CNN correspondent and Kerry native Donie O'Sullivan said that there was "always a guy in a Kerry jersey", while Irish rugby player Simon Zebo tweeted a picture of one of the brothers alongside the caption "legend".

There’s always a guy with a Kerry jersey. ? #CiarraíAbú https://t.co/vNfvH6q164

Meanwhile, the official Kerry GAA Twitter account said that "it is almost a requirement at this stage to have at least one #KerryGroup Kerry GAA jersey at all big events."

It is almost a requirement at this stage to have at least one #KerryGroup Kerry GAA jersey at all big events ??? Get yours at the @KerryGAAStore1 pic.twitter.com/iXt8f5J9aE