On This Day: IRA and British called a truce in the War of Independence in 1921

The truce signified the end of the War of Independence and led to the negotiations that brought about the Anglo-Irish Treaty in December 1921. 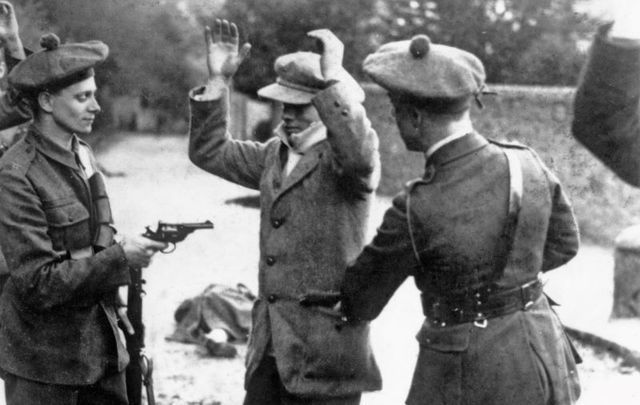 A suspected member of the Irish nationalist party Sinn Fein is searched at gunpoint by temporary constables of the British Black and Tans, during the Irish War of Independence, Ireland, November 1920. Getty

On this day 100 years ago, the truce that ended the Irish War of Independence came into effect after the conflict reached a stalemate.

Secret talks over a truce between Sinn Féin President Arthur Griffith and British Prime Minister Lloyd George had begun via intermediaries in December 1920, with the Dáil cabinet reacting favorably to the British terms of dominion status.

Greenwood's obstinance resulted in the War of Independence carrying on for another six months, claiming the lives of more than 1,000 people.

After six bloody months of conflict, Lloyd George was essentially faced with two solutions; treat the War of Independence as a real war and declare martial law across the 26 counties of Southern Ireland, or attempt to negotiate favorable peace terms.

There was little appetite for a full-scale war in Britain at the time, while most members of the British regime in Dublin Castle favored an attempt to broker peace.

Under Secretary for Ireland Andy Cope, who was particularly disappointed by the failure to reach an agreement the previous December, had also kept in constant contact with the Irish Government, ensuring that channels of communications were kept open.

By the time Lloyd George once again attempted to sue for peace in July 1920, President of the Irish Republic Eamon de Valera had returned from a fundraising campaign in the United States. The British authorities had identified de Valera as a more moderate force than Michael Collins, who had led the Irish forces in de Valera's absence.

As a result, a series of talks between de Valera and southern unionist leader Lord Middleton took place in the Mansion House in Dublin between July 4-8, 1921. The talks would lead to the truce that would bring an end to the conflict between Ireland and Britain and lay the ground for detailed negotiations later in the year.

British forces would remain confined to their barracks under the terms of the truce, while the IRA would not decommission its weapons.

The agreement was struck in the Mansion House on Saturday, July 9, and came into force at 12 noon on the following Monday.

IRA leaders in Dublin hurriedly conveyed news of the truce to commanders around the country, who were largely bewildered by the news.

One volunteer in Monaghan, for example, said that he did not believe that the truce would be permanent and said that many volunteer's "lust for blood had not been satisfied".

A number of local battalions of the IRA decided to have a final crack at their British counterparts on Sunday, July 10, one day before the truce came into effect, leaving several people dead or grievously injured on both sides.

There were also large-scale riots in Belfast after enraged loyalists attacked Catholic communities in the city in response to an IRA ambush on July 9, resulting in the deaths of 11 Catholics and five Protestants, while 150 Catholic houses were also destroyed.

However,  the vast majority of the Irish public were ecstatic when the truce came into force on July 11.

Residents in Tralee took to the streets to celebrate the newfound peace, while people in Dublin celebrated the absence of military and police lorries and armored cars.

The truce almost totally halted the violence that had plagued Ireland for more than two years and led to negotiations in London later that year. These negotiations would eventually lead to the Anglo-Irish Treaty, signed on December 6, 1921, and ratified by the Dáil on January 7, 1922.

However, the peace established by the truce in July 1921 would be temporary and violence would break out across the country shortly after the signing of the Anglo-Irish Treaty with the outbreak of the Irish Civil War.