Ireland, England, Scotland, Wales, and Northern Ireland intend to bid to co-host the 2030 World Cup, but those hopes will have all but disappeared following the disgusting behavior of a significant number of English fans in London. 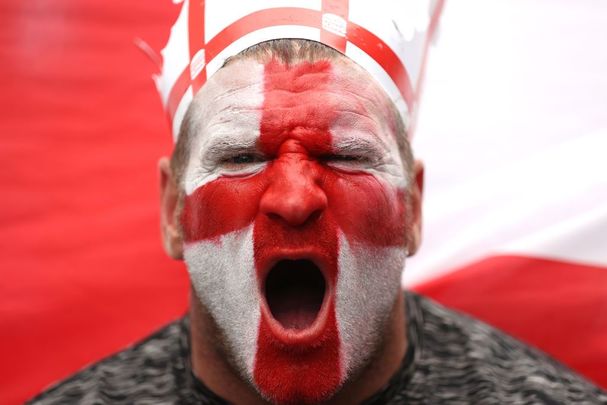 An English football fan photographed outside Wembley Stadium, in London, before the Euro 2020 final against Italy. Getty

As England’s hopes of lifting Euro 2020 faded with Bukayo Saka’s missed penalty against Italy, so too did Ireland’s prospects of hosting the World Cup in nine years’ time.

The Football Association of Ireland is preparing to table a bid to host the biggest sporting event in the world alongside England, Scotland, Wales, and Northern Ireland. However, any chance of world soccer’s governing body FIFA awarding the prestigious event to the UK and Ireland has now gone up in smoke following the disgusting behavior of English fans over the past four weeks.

England’s run to the final of Euro 2020 has been marred by English supporters, who have embarrassed their country on the international stage.

London’s Wembley Stadium hosted both semi-finals and the final of the pan-European tournament in what should have been a joyous occasion for English football. Rather than being remembered as a perfect finale to a thrilling festival of soccer, however, Wembley will be remembered for hundreds of ticketless hooligans breaching the stadium’s perimeter, attacking innocent fans, and openly taking drugs.

Unbelievable footage of violence in Wembley tonight. A literal child gets punched by a full grown man and an Asian man is kicked repeatedly in the head by several people. Disgusting behaviour. pic.twitter.com/NLtvjgF8Fe

There were reports of racist and xenophobic chanting, of a defenseless steward being punched in the face, and of open cocaine use in front of young children inside the stadium as hundreds of ticketless thugs overran security and made their way into the ground, while many supporters reported being intimidated out of their seats.

The unsavory scenes resulted in at least 53 arrests, while 19 police officers suffered injuries.

It was a dark stain on what has been a celebration of soccer over the past month, but it was hardly an isolated incident.

The violence poured onto the streets of London, with enraged some English fans stamping on the Italian flag, others racially abusing their Italian counterparts, and more still vandalizing areas of London.

The bitterness and poisonous abuse didn’t stop there.

Marcus Rashford, Jadon Sancho, and Bukayo Saka, three young black England players who missed penalties in the shootout against Italy, were the subject of disgusting racist abuse on social media.

Saka, who is just 19, bravely stepped up to take England’s fifth and most important penalty in the shootout but saw his effort saved by Italian goalkeeper Gianluigi Donnarumma.

Predictably, Saka’s Instagram account was bombarded with disgusting racist comments and messages within minutes of missing the penalty.

Marcus Rashford, meanwhile, who has spent much of the last year petitioning the Conservative Government to feed hungry schoolchildren, was also subjected to horrific abuse.

Vile racists defaced a mural dedicated to Rashford in his native Manchester, while others attacked 21-year-old Jadon Sancho, who also missed a penalty in the shootout.

The abuse was entirely unsurprising given the high number of fascists that support the English national team.

These supporters have disgraced England consistently over the past month and are completely at odds with the current crop of English players, who are remarkably likeable and humble to the point that Irish supporters may have been swayed to wish England well.

Irish fans will naturally support whoever England are playing against due to the history between the two nations, but there would have been a genuine case for some Irish fans backing this group of English players had it not been for the supporters.

After all, the spine of the England team that made it to the final of Euro 2020 is comprised of players who could have played for Ireland through their parents or grandparents.

Meanwhile, the likes of Rashford and Raheem Sterling have used their platforms to become genuine role models, challenging politicians and fighting for equality and fairness.

But it is impossible for anyone, let alone Irish fans, to support the English team when they are backed by a group of jingoistic, racist, violent, and abusive fascists.

These fans booed their own players as they took the knee before Euro 2020 games in a stance against racism, justifying their racism by arguing that politics has no place in sport, failing to spot the irony as they gleefully sang about the World Wars when England played Germany.

These fans also booed the German, Danish, and Italian national anthems in a glaring and disgraceful show of disrespect.

They also subjected a young German girl to horrific xenophobic abuse during England’s win over Germany when images of the girl in floods of tears were broadcast at the end of the match.

“Think we forgot your grandad killed Ann Frank you little Nazi slag,” one English fan tweeted alongside an image of the tearful girl, while hundreds more parroted similar vile nonsense.

These fans are the reason that pubs across Ireland exploded with joy when Italy secured their first European Championships since 1968 on Sunday night. They have no place in soccer and do not deserve to follow a group of players that has fought for social justice throughout the Euros and beyond.

They are also the reason why Ireland will not co-host the World Cup in 2030.

There are, of course, a large number of decent English fans who were equally appalled by the actions of these far-right thugs throughout the tournament, but the fact remains that England possesses a nasty core of militant fascists who cause trouble wherever they go.

These fans – and that word is used very loosely – do not deserve to enjoy a prestigious event such as the World Cup on home soil and there is no chance that FIFA will award the World Cup to England in light of Sunday night’s events. Ireland, in turn, will be unable to ever host a major tournament without England’s stadia and infrastructure.

That may be a blessing in disguise, sparing Ireland the ignominy of being associated with such a bunch of mindless thugs.

In any case, the FAI should not entertain any attempt to bid for the World Cup and any thoughts of hosting a major soccer tournament should be placed firmly on the backburner.

English fans have embarrassed themselves and their country on the international stage and they should never be allowed to host another major tournament, even if it puts paid to Ireland’s dreams of doing so.