Saturday night’s fiasco in Vegas where McGregor lost to Dustin Poirier when he tripped over his own leg and broke it was only the latest example of how his professional skills have eroded. 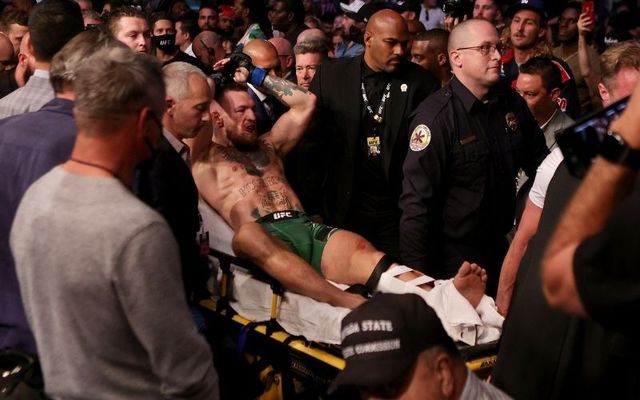 PT Barnum, the king of showbiz, said there is a sucker born every minute and Conor McGregor would surely agree.

Though he has been well past his prime for years, the mouthy McGregor continues to roll in the bucks as gullible pay-per-view fans open their wallets. He has six of the seven highest paydays in UFC history.

But he’s running on fumes. Saturday night’s fiasco in Vegas where McGregor lost to Dustin Poirier when he tripped over his own leg and broke it was only the latest example of how his professional skills have eroded.

It was farcical but not funny, either for McGregor or for those who spent hard-earned dollars expecting the leprechaun king to grant one more wish and become the fighter of old.

Alas, it was never to be and McGregor can hobble all the way to the bank knowing he has pulled off another fight night and loaded his pockets in the meantime.

Yes the injury was real and no doubt incredibly painful, but it seems McGregor lately has been finding more bizarre ways to lose as his career winds down.

Everyone, of course, loves a showman, and McGregor has traded his life story from plumber to peerless fighter with what can only be described as genius.

Nothing sticks to him, not even serious sexual accusations or claims of racism.

He says he will be a billionaire in a few years and who are we to doubt him.

It is just that he can’t fight anymore and has stopped being a serious contender. As the Los Angeles Times noted  “McGregor dropped to 1-3 in the cage since 2016, when he abdicated his UFC title reigns and accepted a wildly lucrative boxing match with Floyd Mayweather. McGregor has been unable to recapture his fearsome MMA form, losing decisively to Khabib Nurmagomedov and twice to Poirier while beating only an over-the-hill Donald Cerrone.’’

Conor McGregor, whiskey peddler, showman, brilliant at his best has been going downhill in the octagon for a few years now. It is surely time to stop and chase his billionaire dreams and leave the octagon for the last time.