Immigrants in the United States are being demonized under Donald Trump's rule and it's time we just looked at the state and figures at hand and realize that. 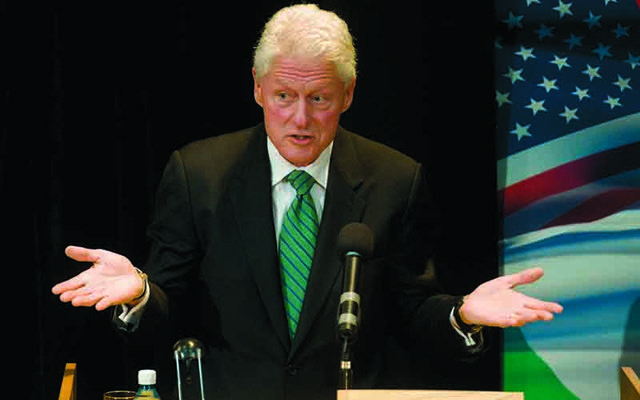 Immigrants in the United States are being demonized under Donald Trump's rule and it's time we just looked at the state and figures at hand and realize that.

Former President Bill Clinton called it right during a visit to Dublin last week to speak when asked to discuss the American immigration crisis.

“What crisis?” he asked, and pointed out the U.S. “crisis” compared to what is happening in other countries counts for very little.

Turkey has taken in an estimated three million Syrian refugees. Germany has taken one million.

Sweden has taken 135,000, the largest amount proportionate to the size of any country. All of those countries have encountered great upheaval as a result of their generosity.

German Chancellor Angela Merkel barely survived in the German elections. Turkey is in a state of internal turmoil.

Last weekend a hard right Neo-Nazi party in Sweden won about 18 percent of the vote.

In comparison to those numbers, the U.S. has very little to worry about as Clinton said in an interview on the Pat Kenny Show on the Newstalk radio station.  The former president was in Dublin to participate in the conference marking the 50th anniversary of Concern Worldwide.

Tune in for the exclusive interview from 9am this morning #PKNT

He stated that the Trump-led focus on the issue was "a manufactured crisis to take advantage of the global tide of identity politics.”

"We act like it's the end of the world when 30,000 people show up at the southern border of the United States," he argued.

"Yes, there are some reasons for people to feel resentment...there's growing inequality, and yes, everybody wants some limits on immigration."

Clinton said there was a crisis in American politics that has less to do with immigration than a determined effort by the right to impact elections by denying voters the chance to cast a ballot.

“In America, we're fighting for the very constitutional right to vote... we're fighting for our history as a nation of refugees, against policies I never thought I'd see, dividing children and parents and all that sort of stuff,” he said.

It is always worthwhile when Bill Clinton speaks to pay attention. He has an uncanny ability to explain an issue in simple, yet profound terms.

When you think of it, the undocumented issue is out of all proportion to its actual impact.  Lies are continuously told, such as fake facts about the percentage of undocumented in American prisons.

To listen to Fox News you’d think every second prisoner was an undocumented person wanted for an horrific crime. Immigrants make up 26 percent of prisoners in federal jails.

Also, federal prisoners account for only 10 percent of the inmate population as state prisons house 90 percent of all criminal cases.

Thirty percent of the undocumented were being held for deportation for entering the country illegally. not for committing other crimes.

So when you round it up, out of 2.1 million prisoners nearly 118,000 are undocumented, one-third of whom are being held on the sole charge of illegal entry and are being deported. Meaning the actual percentage of undocumented prisoners is 5.5 percent of the American prison population.

Not that you will read that figure any time soon on a Fox News bulletin or on the shows hosted by Sean Hannity and Tucker Carlson, who demonize immigrants all the time.

Clinton has a unique ability to cut to the heart of the matter. Immigrants are being demonized as part of the Trump us versus them, divide and rule mentality.  It is time we all woke up to that.