Bill Clinton says there is no immigration crisis in America, Trump invented one

The former US president Bill Clinton has said there is no immigration crisis in America compared to other countries such as Turkey who are taking in millions of refugees. 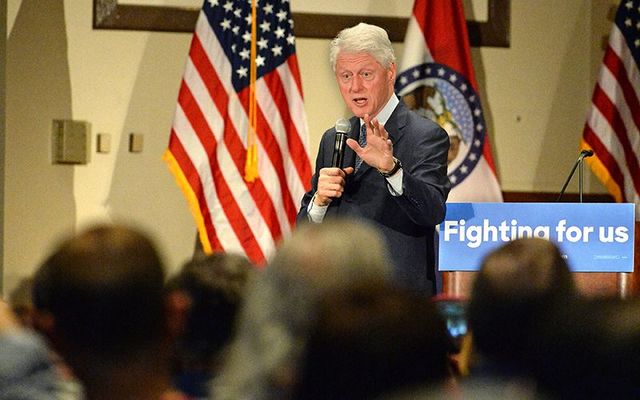 The former US president Bill Clinton has said there is no immigration crisis in America compared to other countries such as Turkey who are taking in millions of refugees.

US President Bill Clinton was speaking on the Pat Kenny show on Irish station Newstalk during a visit to Ireland.

He warned about extremist rhetoric on the issue from the right. "But this anti-immigrant fervor is a very dangerous symptom of an 'us vs them' world." Clinton said adding that that "America has no real immigration crisis".

Read more: Why Trump is visiting Ireland and how unfriendly crowds will help him

He stated that the Trump-led focus on the issue was "a manufactured crisis to take advantage of the global tide of identity politics.

"We act like it's the end of the world when 30,000 people show up at the southern border of the United States," he argued.

"Yes, there are some reasons for people to feel resentment... there's growing inequality, and yes everybody wants some limits on immigration."

Tune in for the exclusive interview from 9am this morning #PKNT

He said there was a crisis in American politics however.

“In America, we're fighting for the very constitutional right to vote... we're fighting for our history as a nation of refugees, against policies I never thought I'd see - dividing children and parents and all that sort of stuff."

On the issue of Brexit, he stated he was worried about the impact on the Good Friday peace agreement. on Northern Ireland

He told Newstalk the political situation in the North will be clarified as soon as people know the precise terms of the Brexit deal.

He stated: "I was most worried about the Good Friday Agreement, because I care so much about Ireland."

Speaking about the Brexit vote he argued: "I was dismayed because there were people, I thought, who voted for Brexit because they thought the European Parliament had gone too far.

"Well, nearly everybody can cite one or two examples where they thought the European Parliament went too far. If that's the test, none of us would belong to any clubs, or anything else - I thought that was overreacting.

"Then there were those, mostly in rural England and Wales, who said they wanted to get rid of the immigrants. they were worried about the Polish immigrants taking their jobs. Well, they were basically going to cities where there was a shortage of employees and an abundance of work. I never thought it made any sense."

On progress in the North, he said: "Even though Northern Ireland's kept the peace, and there's still cranes in Belfast where work is going in... and the Irish economy is back to where it was before the crisis, as fastest growing economy in Europe... but the Northern Ireland economy's growth is still under 2%, and it's because of all this uncertainty and where we're going to go.

"I'm concerned about it - but I do believe the political situation in Northern Ireland will clarify, once people know exactly what the Brexit terms are going to be."

Clinton described himself as the 'ultimate optimist' and said doesn't believe the increased polarization in politics has led to a hopeless situation.

"Once you lose that, when there's no trust and no limits, it's very hard.”