The British press, perhaps in anticipation of a state visit, published extracts from a new book that alleged that Biden’s mother hated the British. 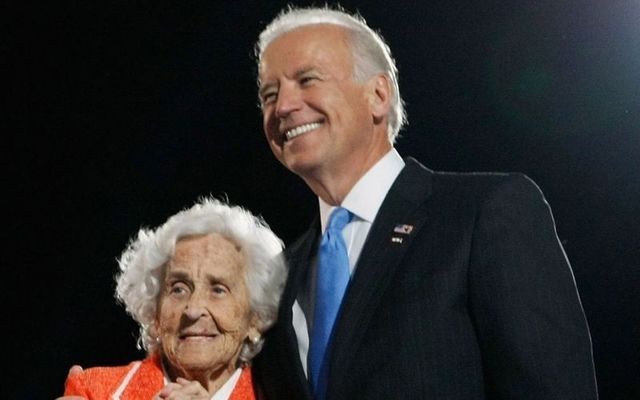 Biden with his mother Catherine Finnegan - also known as Jean - at the Democratic Convention in 2008. Getty

President Biden will go to Ireland on a state visit this year, likely in June according to a weekend report in the Irish edition of the U.K. Sunday Times.

There is little doubt that he will get a warm reception indeed, given his own embrace of his Irish roots and his self-identification as Irish American.

Biden wears his Irishness on his sleeve and his advocacy on the Good Friday Agreement, when warning the British not to bollix it up over Brexit, was timely and influential.

Mind you there are many, including this writer, who wonder why there is no U.S. special envoy to Northern Ireland, a role first filled by former Senator George Mitchell.

With Brexit negotiations coming up, not to mention a Northern Ireland election and Ukraine dominating the agenda, it seems a very good time for the president to appoint one.

He will get lots of love in Ireland, in Mayo and Louth, especially where his roots are, but maybe not so much if he travels to Britain on the same trip.

The British press, perhaps in anticipation of a visit, published extracts from a new book that alleged that Biden’s mother hated the British.

The book, My Mess Is a Bit of a Life is by British screenwriter Georgia Pritchett, who worked on the TV series Veep about a female vice president.  Pritchett interviewed Biden, who was vice president to Barack Obama at the time.

Learning the screenwriter was British, Biden allegedly discussed how much his mother Catherine Finnegan, known as Jean, “hated the English,” telling her she had written “hundreds” of poems on the matter.

Pritchett wrote, “He went off to find them and returned with hundreds of poems describing how God must smite the English and rain blood on our heads.”

Biden also recounted how his mother had refused to sleep in a bed in Britain in a hotel where the Queen once stayed.

She slept on the floor instead.

Mind you, Pritchett is not just any screenwriter.  According to her bio, she is a “multi-award-winning comedy and drama writer, who has five Emmys, five Writers Guild Awards, a Golden Globe, a BAFTA, and a Producer’s Guild award. She is currently a writer and co-executive producer on HBO's critically acclaimed show, Succession, which recently completed its third season. Georgia was the co-executive producer and writer on the HBO multi-Emmy winning show Veep, which ran for seven seasons.”

That’s quite the resume, but the Catherine Finnegan story strikes a jarring note.

I interviewed Biden at length back in 1986 soon after he came to the U.S. Senate. His Irish memories then were vivid too, especially of his grand-aunt warning him about the Black and Tans and the destruction and misery they caused in Ireland. She scared him so much he kept awake at night for fear they would come up the stairs.

There was no mention of any antics by Catherine Finnegan, especially poems dripping with blood about Britain, and we talked about his roots for over an hour.

I suspect as an acknowledged screenwriter about fictional events Pritchett may well have exaggerated many of his comments about his mother.

Either way, it will hardly do Biden any harm in Ireland where he will receive an enormous welcome, especially as his predecessor Donald Trump was despised there.  His mother hating the Brits will play well in some circles too.