Five-time Emmy-winning screenwriter Georgia Pritchett also recalled in her autobiography that Biden said his mother used to write poetry outlining her hatred of the English. 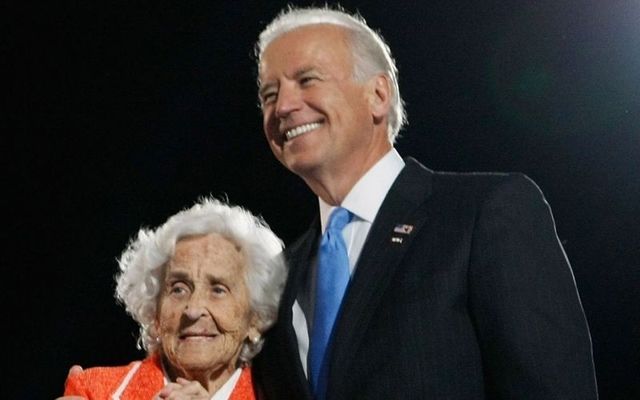 Biden with his mother Catherine Finnegan - also known as Jean - at the Democratic Convention in 2008. Getty

A new book alleges that Joe Biden's mother hated England so much that she chose to sleep on the floor rather than in a bed that the Queen once slept in.

Five-time Emmy-winning screenwriter Georgia Pritchett said in her autobiography that she was invited to meet Biden in the White House while he was serving as Vice President.

The British screenwriter said she was conducting research for the American comedy series "Veep" at the time of the visit and recalled that Biden initially talked to her about a recent trip to Ukraine until he was advised to change the subject.

The Vice President then noted Pritchett's nationality and informed her that his mother Catherine Finnegan had "hated the English".

Biden allegedly said his mother had written several poems outlining her dislike of the English, according to Pritchett's autobiography.

"He went off to find them and returned with hundreds of poems describing how God must smite the English and rain blood on our heads," Pritchett wrote in the autobiography.

Biden then reportedly told her that his mother chose to sleep on the floor while staying in a hotel that Queen Elizabeth II had stayed in as she did not want to sleep in the same bed that the Queen had slept in.

"She was so appalled that she slept on the floor all night, rather than risk sleeping on a bed that the Queen had slept on," Pritchett wrote, adding that she personally admired Finnegan's ability to prioritize her principals over a comfortable bed.

Biden has spoken at length about his Irish roots and has visited his ancestral homeland in Carlingford, County Louth, and Ballina, County Mayo on several occasions, most recently in 2017 when he turned the first sod at the new Mayo Roscommon Hospice Foundation center in Castlebar.

A clip of Biden went viral last year when a BBC reporter asked the President if he had a "quick word for the BBC".

Pritchett's autobiography "My Mess is a Bit of a Life" has been in circulation for nearly a year, but the Biden reference was recently spotted by former Downing Street Press Officer Alastair Campbell.