President Joe Biden said former President Donald Trump "values power over principle" during a live address to mark one year since the US Capitol insurrection. 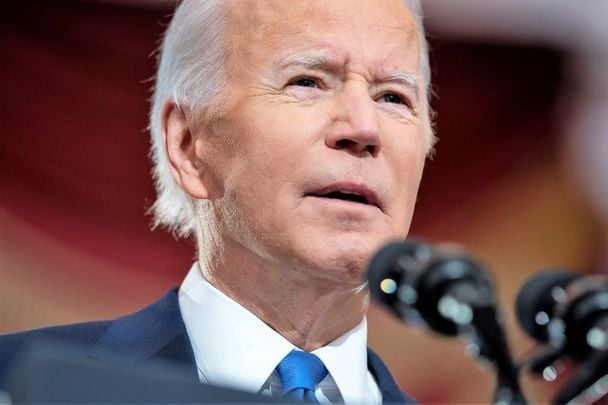 January 6, 2022: US President Joe Biden gives remarks in Statuary Hall of the U.S Capitol in Washington, DC. One year ago, supporters of President Donald Trump attacked the U.S. Capitol Building in an attempt to disrupt a congressional vote to confirm the electoral college win for Joe Biden. Getty Images

President Joe Biden marked the one-year anniversary of the January 6 Capitol Hill insurrection in a live address in which he called out former President Donald Trump for prioritizing his ego and attempting to undo democracy.

An animated and impassioned Biden accused his predecessor of attempting to prevent a peaceful transition of power, claiming that Trump's "bruised ego" meant more to the former president than democracy or the US Constitution.

"For the first time in our history, a President had not just lost an election. He tried to prevent the peaceful transfer of power as a violent mob reached the Capitol," Biden said.

"But they failed. They failed. And on this day of remembrance, we must make sure that such an attack never, never happens again."

Biden did not refer to Trump by name during the 30-minute address but made 16 references to the "former president".

He accused his predecessor of spreading misinformation about the 2020 presidential election, refusing to accept defeat, and inciting a mob of violent and angry supporters to storm the Capitol Building on January 6.

"A former President of the United States of America has created and spread a web of lies about the 2020 election. He's done so because he values power over principle; because he sees his own interest as more important than his country's interest and America's interest," Biden said in the address.

He called on the American public to continue to stand for democracy and the rule of law, adding that the United States remains in a battle for its soul.

"The former President and his supporters have decided the only way for them to win is to suppress your vote and subvert our elections. It's wrong. It's undemocratic. And frankly, it's un-American."

Vice President Kamala Harris, who spoke before Biden, said that the insurrection offered a glimpse into American life if democracy was dismantled.

"On January 6, we all saw what our nation would look like if the forces who seek to dismantle our democracy are successful: The lawlessness, the violence, the chaos," Harris said.

"When I meet with young people, they often ask about the state of our democracy. About January 6. What I tell them is: January 6 reflects the dual nature of democracy. Its fragility and its strength."

More than 700 people have been arrested in connection with the Capitol riots on January 6, 2021, which kickstarted the largest FBI investigation in history.

The House Select Committee continues to investigate the events leading up to the riots, while Trump allies Mark Meadows and Steve Bannon have been held in contempt of Congress for declining to cooperate with the investigation after being subpoenaed.

A series of commemorative events organized by House Speaker Nancy Pelosi will take place on Capitol Hill to mark the first anniversary of the insurrection, including a minute's silence on the House Floor.

Donald Trump was scheduled to hold a news conference to mark the anniversary of the Capitol riots, but the event has since been canceled.