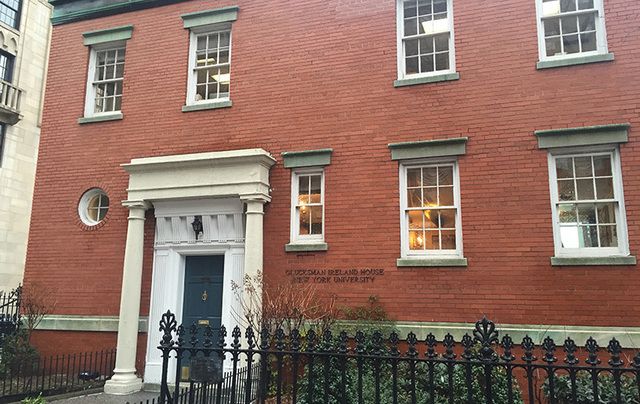 The annual dinner gala of Glucksman Ireland House will take place on Tuesday February 28th at the NYU Global Center and NYU Kimmel Center and I am truly honored to be one of the special guests, along with Sir James Galway, who will be acknowledged on the evening.

The honor means an incredible amount to me personally, a recognition from one of the most admired Irish cultural institutions not just in New York but anywhere else in the world.

Glucksman Ireland House was launched in April 1993, a hugely significant occasion for Irish studies, culture and the arts in the United States.

I was lucky enough to be there as a parade of distinguished Irish scholars and leaders, led by Prime Minister Albert Reynolds, playwright Brian Friel, legendary actress Maureen O’Hara and others walked beside NYU president Jay Oliva to the beautiful Fifth Avenue mews house location. It quickly became a  home from home  for so many Irish artists, writers, musicians poets, historians in New York .

The powers who created Glucksman House were Loretta Brennan Glucksman, a renowned editor and journalist and her husband Lew Glucksman, a Wall Street titan and Hibernophile.

masterpiece facility and program would be made available in New York for all who loved the art and culture of the Irish.

They built the structure, raised the funds and the dream of a top class Irish institution in the heart of Manhattan took hold. Top-notch academics such as Professor Joe Lee, one of the great Irish historians, took up residence and Ireland House has never looked back.

For the New York community, Glucksman Ireland House provides access to Irish and Irish-American culture and fosters excellence in the study of Ireland, Irish America, and the global Irish Diaspora. It ran a wonderful series of events on the centenary of the 1916 Rising.

That first day when the institute was officially opened is remarkable for me in another way too, for sharing an elevator and then a five-minute conversation with John Kennedy Jr.

My wife Debbie was dumbstruck for one of the few time of her life as America’s most eligible bachelor as he was then, chatted casually as we headed to the reception.

On the 20th anniversary of Ireland House the Nobel Prize winning poet Seamus Heaney attended and delivered a poem for Loretta a rare gift indeed from a Nobel Laureate.

In his remarks, he called her “Bean an Ti”, woman of the house, a term that means far more in the original Irish than it does in translation.

In Ireland within the four walls of the home the woman of the house ruled, and her welcome and attention was everyone's ambition. Loretta has become the welcoming queen for over two decades now, fostering an atmosphere of connection and friendship that makes Ireland House a natural second home for many with its own Bean An Ti.

If you fancy becoming part of the excitement and the movement to increase the visibility of Irish culture the email is ireland.house@nyu.edu. For ticket reservations for the dinner call 212 998 3953.

As Barack Obama might say if he spoke Irish, Glucksman House is an example of “Yes We Can,” or “Is Feidir Linn.”

Long may it thrive.