Groundbreaking research by NYU faculty, international scholars and Irish Studies Masters of Arts students features in new book on the American role in the 1916 Easter Rising. 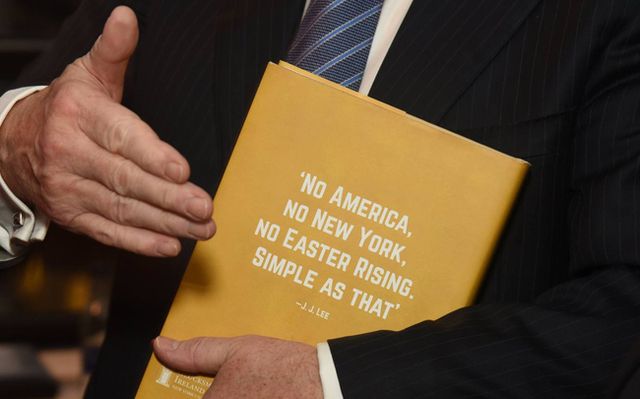 Taoiseach Enda Kenny holds on tightly to his copy of Ireland's Allies at the New York Consulate on 2 December 2016. Glucksman Ireland House NYU

2016 has been an extraordinarily busy year at New York University’s Glucksman Ireland House. Over the past two years, the world-renowned Center for Irish and Irish American Studies has been engaged in research on aspects of the American role in the 1916 Easter Rising. This study has culminated in the recent publication of a seminal volume on this topic, Ireland’s Allies: America and the 1916 Easter Rising, edited by Miriam Nyhan Grey (UCD Press, 2016). Renowned historian J. J. Lee has observed, ‘No America, no New York, no Easter Rising. Simple as that.’ Ireland’s Allies: America and the 1916 Easter Rising interrogates that assertion by placing the Rising in Dublin in a transnational setting, thereby making a contribution to our understanding of ethnic allegiances in neutral America and to the mechanics of revolutionary networks and diaspora nationalism. The United States provided an important post-colonial republican model for the Irish in 1916 who drew on that legacy.

The scope of this research strategy has been broad both geographically and in terms of the profile of the scholars involved. Chapters originated from faculty based at Glucksman Ireland House NYU as well as well-known historians across the United States and in Ireland. One of the most gratifying aspects of this project has been to see research emerge from students in NYU’s Master of Arts in Irish and Irish-American Studies program housed at Glucksman Ireland House. In fact, seven of the twenty-four chapters in this weighty volume were authored or co-authored by individuals who have undertaken this unique graduate program which focuses innovatively on the Irish-American experience. A research initiative that encompassed the work of graduate students demonstrates the confidence of a program now almost a decade old.

The contributions from graduate-student research include:

The dynamism of Glucksman Ireland House NYU draws further attention to the opportunities for the MA in Irish and Irish American Studies. Open Houses for the MA program will take place from 5pm - 6.30pm, Thursday 26 January, 2017 and Thursday March 9, 2017 for prospective applicants interested in hearing the experiences of alumni and meeting faculty. Please RSVP via this link or email ireland.house@nyu.edu

Ireland’s Allies: America and the 1916 Easter Rising, edited by Miriam Nyhan Grey, is available via www.ucdpress.ie