Tom Deignan talks with Irish American Kim Kelly, author of "Fight Like Hell: The Untold History of American Labor," and about how the Irish continue to be a big part of the American labor story. 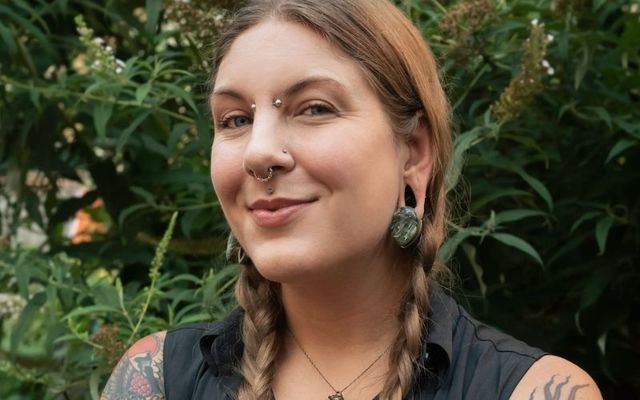 A few years back, Kim Kelly had to visit Ireland regularly for personal reasons.

“I absolutely love Ireland, and yearn to return when I can. I dated a Dubliner for a few years,” Kelly told the Irish Voice, sister publication to IrishCentral, recently. “We're still friends!”

Which is a good thing. Because since then Kelly, a south Jersey-born Irish American who now lives in Philadelphia, has spent a lot of her time focusing on brawls, fights, and assorted other conflicts in the name of social justice and equality.

“There is just something so special about (Ireland), and the people, and that visceral legacy of rebellion, resistance, and fighting for our freedom from oppression,” Kelly says.

“I know I'm very lucky to have formed that more personal connection, because so many Irish Americans only have a few bits of family history to rely on to link them to our homeland. The relationship with my Dubliner didn't work out, but my deep love for Ireland endures.”

In recent years, Kelly has had a front-row seat for a new kind of “resistance,” a new round in a battle fought fiercely by Irish Americans not all that long ago and now taken up by immigrants from all over the world.

And whether you realize it or not, you also have a seat at the fight. Every time you order a frappuccino from Starbucks, or toilet paper from Amazon, you’re playing your own small role in one of America’s important debates – the role of organized labor in the 21st-century economy.

Kelly has her say about all of this in a fascinating new book called "Fight Like Hell: The Untold History of American Labor."

She spirals back in time to tell us about “an old Irish woman in a black dress who prowled the picket lines and stuck fear into the heart of the corporate elite.” A “militant socialist who breathed class war like a dragon and doted on her (union) members as if they were her own children.”

This was Cork native and 19th-century labor activist – “John Brown in petticoats,” as some put it at the time – Mary “Mother” Jones.

Kelly also tells the stories of Irish labor trailblazers Kate Mullany and Margaret Hinchley. And she outlines how their spirit lives on in today’s labor struggles, amongst those often not included in traditional labor histories, across a wide range of contemporary industries.

All of this comes amidst an intense debate about what role unions should play in the post-Covid, global economy.

"We're having a lot of conversations about the future of work, what it looks like here in America,” Walsh said in an interview on Boston public radio.

“People are not going to settle for just an average job anymore. They're looking for something better. I think collective bargaining, organized labor, helps and assists in that, and I think we're going to see more and more organizing."

As Walsh and Kelly indicate, the Irish continue to be a big part of the American labor story.

All of whom you should think about the next time someone claims immigrants used to be so much better at quietly assimilating, at behaving themselves, and knowing their place.

Nope. They spoke out loudly and proudly, and challenged the status quo.
“Mother” Jones was many things. Quiet was not one of them.

Something to consider when you sip your next frappuccino. Or tug at the toilet paper.