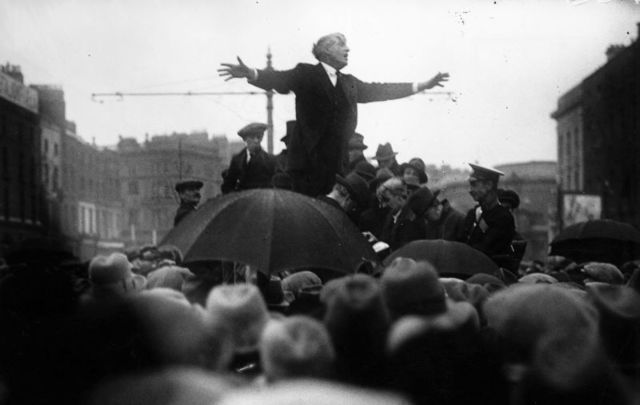 Jim Larkin is remembered as the Lion of the Irish labor movement. Getty Images

The below is an excerpt from "Echoes of Their Footsteps, Volume I" by Kathleen Hegarty Thorne. Researched by Patrick Flanagan.

27 April 1920: Jim Larkin, labour leader involved with the Irish Transport and General Workers Union (ITGWU) in 1909, was sentenced to five to ten years in the United States for “criminal syndicalism” — trade unionism. He spent his time in Sing Sing Prison (“Jim Larkin in Sing Sing,” Freemans Journal, 13 August 1921, p. 5). Larkin served as his own defence attorney and although he lost his case to a “prejudiced judge and unfriendly jury,” he came out of the affair with honour and respect.

“Fearless and forthright as ever, he did not shrink from asserting to a hostile courtroom―and press―his belief in the basic injustice of the prevailing social system” (“Trial of Larkin,” Irish Press, 27 April 1977, p. 8).

Read More: On this day: The Dublin Lockout begins in 1913

A look back into Larkin's childhood helps explain how he became a champion of the men on the bottom of the financial ladder and a defiant challenger to the "haves" on the top rungs. Although born in Newry, Larkin’s family moved to Liverpool, where he began work at age seven delivering milk twice daily. After his father’s death, he left the city when he was eleven and walked to Cardiff and London in a desperate search for work.

Unsuccessful in obtaining a position, he stowed away on a ship bound for Latin America, where he was chained and left with a tin of water while fending off rats, which ate his fingernails and toenails.

Larkin returned to Liverpool and found a job with a Liverpool shipping firm. During the strike against the company, he was fired for siding with the underpaid workers. He traveled to Belfast, where his abilities as a labour organiser were brought to the fore.

In 1908, he helped found the Irish Transport and General Workers’ Union, which he oversaw as General Secretary. The bitter labour disputes of Dublin from 1911 to 1913 provided the battleground on which Larkin challenged big business and fought for the common man.