Kathleen Biggins, the longtime host of WFUV's "Ceol na nGael" and "A Thousand Welcomes," chats with Mike Farragher in the latest episode of his TAYSHT podcast. 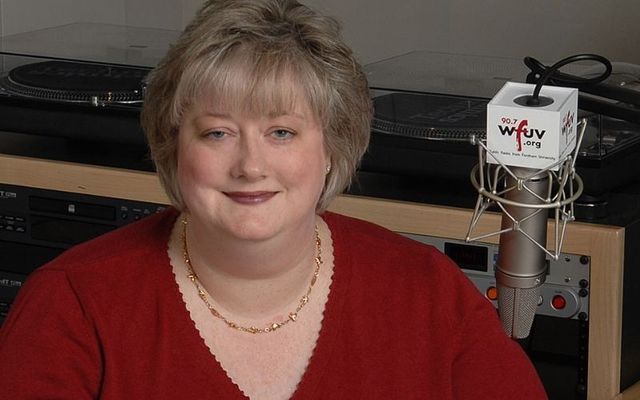 If you’ve been listening to our TAYSHT podcast regularly, you’ll uncover a common theme amongst the musicians we’ve interviewed: the moment they thought they REALLY made it is when they heard their music played on the airwaves of WFUV!

Nestled on the idyllic Jesuit campus of Fordham University, WFUV, the radio station of the university, has dedicated a sizable chunk of its Sunday programming to Irish music. Black 47, Celtic Cross, Shilelagh Law, and The Prodigals, all had their music broadcast on those airwaves and before a band could drop a post on Facebook to let fans know about a gig, WFUV and papers like the Irish Voice (sister publication to IrishCentral) were about the only way to get the word out about an upcoming show.

Kathleen Biggins has been "welcoming" listeners to WFUV since her undergraduate days at Fordham in the 1980s, when she began hosting the Irish-themed programs Ceol na nGael and A Thousand Welcomes on weekends.

Yet her passion for Celtic music dates back even further - all the way to her childhood in Elmsford, New York, when her grandparents and parents fostered a love of their ancestral music in the young Kathleen.

That little girl grew up to become WFUV's assistant news director during college, and, later, a news writer at CBS News Radio. While it was an interest in journalism that brought Biggins to WFUV as an undergraduate, it was her musical heritage that led her to stay. She quickly became involved with the station's Irish programming, first with the community-minded program Ceol na nGael, then with the Celtic music show, A Thousand Welcomes.

Even as her broadcasting career has taken her elsewhere, Biggins keeps her roots firmly planted in The Bronx. She has continuously hosted A Thousand Welcomes since 1986, and her tenure speaks not only to her vast knowledge of the music she plays, but also to her ability to unite a disparate audience, just as Celtic music unites the disparate cultures who make it.

We turned the tables (or should I say microphones) and interviewed this legendary DJ on our latest podcast of TAYSHT. Kathleen shares her views on caraway seeds in soda bread and shares the experience of sharing the music she is so passionate about.

Check out the latest TAYSHT podcast, featuring Kathleen Briggins, here and over on Spotify:

By coming out, footballer Jake Daniels breaks a powerful silence