Long strange trip to the Vatican 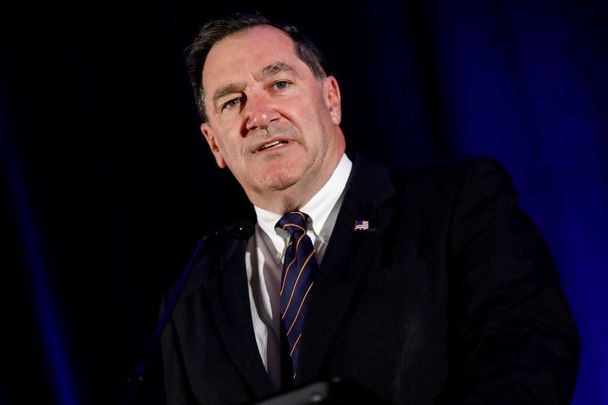 November 6, 2018: Sen. Joe Donnelly (D-IN) speaks with the media ahead of vote returns at the Hyatt Regency in Indianapolis, Indiana. Getty Images

He’s been described as a supporter of “social justice” causes, and served in the House and Senate as a Democrat. Which will make half of the country cheer.

He also has been described as “pro-life” on the issue of abortion. Which will make the other half of the country cheer. And the half that had been cheering stop, and begin booing.

And this might actually make him the perfect guy to serve as the Biden administration's ambassador to the Vatican.

People like to say the Roman Catholic church -- love or it or loathe it -- is clear in its expectations.

But it’s actually always been a lot more complex. And Donnelly is a perfect representation of that complexity.

He served in Congress as a representative and senator from Indiana, and graduated from Notre Dame. And so the applause pours in from the red state galleries, for whom those square-ish states in the Midwest are where true Americans live.

But wait. Donnelly was actually born just outside of New York City. On Long Island.

Which might ease the anxious minds of the MSNBC crowd.

But even that is not so simple.

I, for one, think all this complexity -- or confusion, if you like -- is a good thing.

And if Donnelly becomes Vatican ambassador, his first task should be to explain that the complicated experiences of Irish immigrants in the U.S. is reflected in the complicated nature of his job.

The history of the office only stretches back to 1984. There was no official U.S. rep to the Pope before that.

Life in and around the Vatican, and Italy, was quite messy up to the 1930s. What with the breakup of the Papal States and Mussolini and all that.

But even when the Vatican got its ship of state in order, powerful folks in the good old Protestant states of America had little interest doing diplomatic business with the Whore of Babylon in Rome.

There were still lots of native-born Americans worrying that immigrants and their children from places like Long Island, not Indiana, would get back to work digging their tunnel from the White House to Rome. Which, believe it or not, was a real worry, at least among the QAnon-before-QAnon crowd.

In 1951, President Harry Truman nominated Army General Mark W. Clark to serve in some kind of official capacity as an American liaison to the Pope.

Protests -- mainly from states far, far away from places like Long Island -- followed, and Clark eventually withdrew his nomination.

In short, it’s easy to forget that, for centuries, elites in America engaged in a nasty kind of “identity politics” to marginalize Catholics and other racial, religious, and ethnic minorities.

One wonders if these and other prominent Catholic Republicans, who often complain about immigrants ruining “our” culture, know the deeply contentious history of the diplomatic position Callista Gingrich eventually held.

It was not until Newt Gingrich’s hero Ronald Reagan appointed William A. Wilson in 1984 that America had an official, full-fledged ambassador of the United States to the Holy See.

There are numerous, complex reasons for this, but among them were deeply ingrained anti-papist sentiments held by many Americans who took it for granted that devout Catholics simply could never be loyal Americans.

Maybe Joe Donnelly, and his complicated positions on important issues, can help us see these things a little more clearly.

*This column first appeared in the December 3 edition of the weekly Irish Voice newspaper, sister publication to IrishCentral.