Without the hundreds of thousands of Irish who found new lives in the Americas, and sent money back home, the scale of the disaster back home would have been unthinkable. 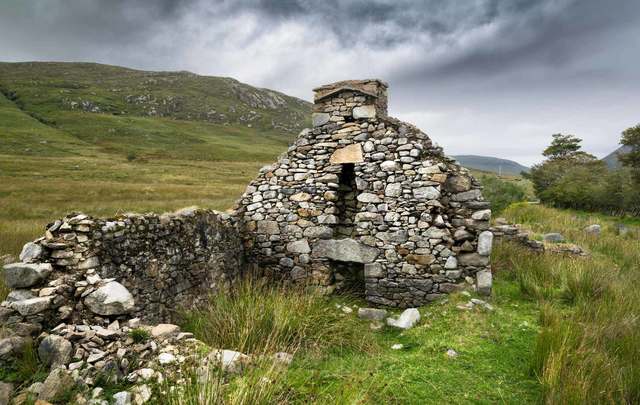 The ruins of a Famine cottage in Donegal, Ireland. this was one of many houses in an abandoned village in an isolated part of the mountains. Getty

From the thousands escaping the famine to the women fleeing the unjustified shame placed on them by the Mother and Baby Homes, America has saved thousands of Irish people.

In a crowded hall in Queens last week, it was hard to avoid the feeling that Ireland was a repressive place – a place to escape from – for so much of our island’s recent history.

A hushed silence had descended upon the New York Irish Center in Long Island City as an audience of mainly elderly and middle-aged people gathered to watch a documentary about the harrowing scandal of the Tuam Babies.

And, then … the anger, the questions, and the disbelief. How had this happened to ordinary Irish women and their children within living memory?

How had 796 babies and infants been discarded like rag dogs, and perhaps even dumped in a septic tank, in a 20th-century Western society?

From the foundation of the state in the 1920s right up to the 1990s, Irish women had been imprisoned for the terrible “crime” of giving birth to a child.

Their children were branded as “illegitimate,” many taken from them against their will, and the women themselves were shamed and stigmatized for life.

That’s why they needed to escape, not just from the institutions themselves but from an island which labeled and judged them and seized them from their family homes in the dead of night.

Where was the justice? Where were the fathers? Why was such cruelty inflicted on these women and these innocent children?

I watched in awe as Galway man Peter Mulryan and his wife Kathleen fielded their questions and told them what it was like to find out, as Peter did in his seventies, that a younger sister he never knew he had could be buried in a septic tank.

Or, for all he knows, Marian could be alive today and walking the streets of New York, Boston, or Chicago, completely unaware of who she really is or where she came from.

Because the story of the Tuam Babies is a story of (illegal) adoptions to “good” Catholic families in America and a generation of women who emigrated to America to escape from the shame. 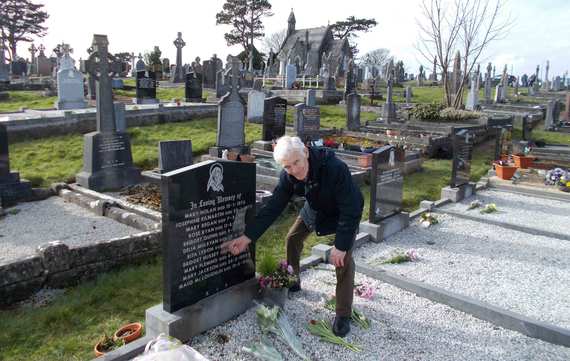 The documentary which was screened in Queens and Boston, “Mother & Baby,” looks at the harsh lives of 20th-century Irish women and children and the survivors’ valiant efforts to rebuild their shattered lives.

In the United States last month, it was astonishing to hear the children of these women stand up and tell their stories. How they knew they had left Ireland, but only found out after they died that they had been imprisoned for having babies long before starting new lives.

One man told me his sister lives just down the road from me in Galway. His mother never talked about her, or the horrors she herself experienced as a prisoner in the Tuam Mother and Baby Home before she escaped to America.

She brought her secrets to the grave, but he still found out and managed to reconnect with his Irish sister. How many other stories are there similar to this from California to Connecticut?

Where would his family, and so many families, be without America?

And, indeed, where would the Irish people, in general, be without the great Irish cities of New York and Boston? These places offered hope, a refuge, and a fresh start for so many of us that we take our connections with America, and the Big Apple, for granted at times.

I arranged to meet Peter and Kathleen at the Irish Hunger Memorial in the financial district of Manhattan a few days before the screening of the “Mother & Baby” documentary in Queens. It felt like the perfect place to ponder on how our little windswept island in the North Atlantic had failed to provide fulfilling lives for so many generations of our people over the past couple of centuries. 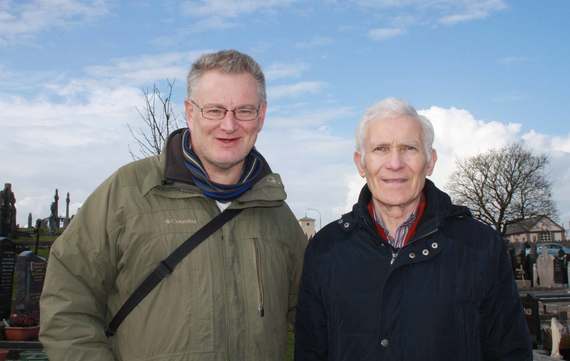 The incongruous stone walls and little cottage under the gaze of so many skyscrapers and the One World building was a little reminder that, for so many of us Irish, this place offered the chance of a life which was impossible back home.

A family from Co Mayo transferred the entire stone cottage across the Atlantic to educate the people of the US about the Great Famine. In case we forget. Or we decide to turn our backs on those who migrate in their thousands in search of hard work and better lives.

That cottage makes for a remarkable image and a wonderful quiet haven in the middle of the hustle and bustle of Manhattan.

At the memorial, there's a quote from Loughrea, Co Galway, a few years before the famine. It’s about people who had pawned off all their clothes and were unable to go to Mass. It brought home to me how close the people of Syria or Guatemala today are to the Irish, and those from Connacht in particular, who fled oppression, conflict, and famine.

The simple, but beautiful, memorial in New York reminded me of our own simple seaside memorial in Salthill, to remind people of the 100 coffin ships which set sail from Galway Bay to America between 1847 and 1850. Thousands of our people, mainly from the wild and desolate west, set sail for the great cities of New York and Boston at a time when a million people died of starvation. 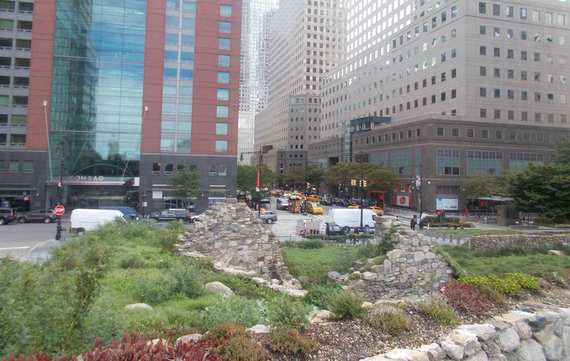 Without the hundreds of thousands of Irish who found new lives in the Americas, and sent money back home, the scale of the disaster back home would have been unthinkable. Many of those who were “lucky” enough to have a ticket to America never even made it to the other side.

When they poured off the boats and into the crowded slums of the Five Points, they may have encountered criminality, murders, and discrimination, but they had power in numbers, they organized themselves, and they built new lives.

At the wonderful Tenement Museum in the Lower East Side, our informative young Italian-American guide marveled at how an Irish family had improved their lot by moving out of the ghetto in the late 1860s. She showed us around the small yard they would have shared with 22 other families and pointed out the picture of Daniel “The Liberator” O’Connell and the map of Ireland on the wall of their tiny home.

They worked hard to make decent lives for their children and in many respects, the impoverished Irish back home had no idea of the struggles their emigrant brothers and sisters had to forge out a decent standard of living in America.

The Irish were still facing discrimination when they moved into that building but, remarkably, she told us that 25% of the people in New York had been born in Ireland at that time. No wonder our people took over City Hall, the police, the fire department, and perhaps even the crime gangs at the time.

Our guide, Chelsea, told us of how the Irish enriched New York with their music, their pubs, and their culture, but not their food, unlike say the Italians or the Chinese. She knew a lot about the Great Famine, but I didn’t have the heart to tell her that huge swathes of the Irish population had lived solely on the humble potato for over half a century before the Moore family moved into their small tenement in 1869.

Out at Ellis Island, a vast caravan of tourists is reminded every day that a young Irish girl called Anna ‘Annie’ Moore, aged just 15, was the very first immigrant to be processed at Ellis Island in 1892. They are asked to imagine the excitement of a young girl upon seeing the Statue of Liberty for the first time, after making a 12 day voyage from the poverty and oppression of Co Cork.

At the World Trade Centre site, I came across the memorial to Tuam woman Ann McHugh who lost her life on 9/11, just a five-minute walk from the Irish Hunger Memorial.

In Hell’s Kitchen, Mayo women in their 50s and 60s used to serve us tea and coffees in Irish cafes on my first visit to New York two decades ago. So many of our people found new lives in the United States in the 1950s and again in the 1980s and early 1990s when the Irish Government could offer them little hope of finding work at home.

"Emigration will soon cause it to be said that Ireland is no longer where flows the Shannon, but rather beside the banks of the Hudson River,” says one of the more memorable quotes at the Irish Hunger Museum.

New York is no longer an “Irish” city in the way it was a century ago and the Irish have long since moved out of the Five Points to be replaced by Chinatown.

The distressed migrants of 2018 are no longer crossing the Atlantic on coffin ships from Cork and Galway, but joining a caravan from Honduras, Guatemala, and El Salvador, or paying people traffickers to take them out of the hell of Syria.

For so many of our people, escaping famine and persecution in the 1800s, the shame of a judgemental society in the 1950s, or recession and stagnation in the 1990s, New York – and America – offered the Irish opportunities and dreams which were denied to them at home.

Yes, where would the Irish be without America?

As we look forward, and our lives evolve, we should never forget where we came from.