"It’s indicative of the failure of this coalition government’s housing strategy over the almost three years it has been in office, and for Fine Gael an indictment of its 11 years in power." 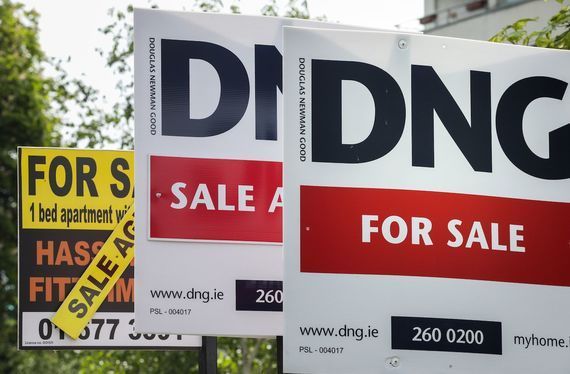 Irish Minister for Housing Darragh O’Brien is either a genius with a clever plan to solve the housing crisis, or is what soccer fans call a “tinkerman,” an individual who is unsure of what works and is constantly changing tactics, flaying around trying to get a winning formula.

In truth, the jury is not out on this one. O’Brien is no genius. His latest spin of the wheel in this game of housing roulette is to place a ban on the eviction of tenants from November to March of next year, a temporary measure – indeed a panic one.

It’s indicative of the failure of this coalition government’s housing strategy over the almost three years it has been in office, and for Fine Gael an indictment of its 11 years in power.

The ban on evictions comes as the country records its highest-ever number, 10,805, in emergency accommodation. In the past, most of those using emergency homeless accommodation were single adults, but during the past couple of years, there has been a rapid increase in the number of families becoming homeless.

The latest figures show that the number of individuals in homelessness is over 30 percent higher than at the same time last year. Bad as that number is, it is by no means the full picture as the figure does not include people sleeping rough or sofa surfing, homeless people in hospitals and prisons, those in direct provision centers, and families in domestic violence refuges.

The problem is visible on every main street in every major town in the country. Government policy interventions are gambling with people’s lives.

As always, the devil is in the detail articulated through the countless heartbreaking stories of lives turned upside down for many and varied reasons. The scarcity of affordable housing, family breakdown, mental health issues, unemployment, and poverty are just some of the triggers at play.

Weekly there are cases of real hardship raised in the Dáil. Last week it was the account of a family with two children with autism who are sleeping rough in Tipperary; the previous week it was students sleeping in cars.

Looking at the figures produced by the Residential Tenancy Board (RTB), they show that of the 3,000 notices to quit currently working their way through the system, most landlords are leaving the market because they want to sell their property. That number is rising. For example, nearly 100 people in a single block of 35 flats were served with eviction notices to leave their residences in Dublin this week as once again the landlord wishes to sell up.

The days of mass evictions are back in Ireland.

Me and my wife along with 34 other flats in Tathony House D8 got eviction notice.

Council should buy block to prevent kicking 100 people out into rental queues or emergency accommodation.

Solutions have been suggested by economists and politicians, including a ban on evictions in the case of a sale as currently renters can still be evicted if the property is sold. The failure of the government to act on this one measure that would give additional security of tenure to tenants supports the view that when it comes down to it, the views of landlords and developers hold primacy with this administration.

But a ban on evictions, while welcome, will not address the other underlying problems. It will provide no new accommodation and in the majority of cases will only postpone the inevitable. The real problem is around the supply of houses.

O’Brien’s proposed solution to this supply problem was launched with a fanfare of publicity in September of last year. His Housing for All plan was predicted to solve the crisis, with the government committing to ambitious targets involving the building of 300,000 homes by 2030.

However, just over one year in and the plan is already a busted flush, with targets not being met. Out of a goal of 9,000 new houses last year, just over 5,000 were actually completed.

House building has now slowed to a trickle with rising costs, uncertain economic forecasts, and a looming recession all hitting the markets. Allied to that, the banks have now become reluctant lenders in the property building market.

Cue more tinkering in the market by O’Brien, who has mandated the Land Development Agency (LDA) to support vulture funds which are finding it increasingly difficult to get loan capital from lending institutions to complete building projects. Who will actually own the houses and apartments has not been clarified.

What is clear, though, is that it is a good deal for the vulture funds whose speculation will now be funded by the taxpayer through the LDA, which was set up in 2018 to develop state land for housing.

This transaction will not add to the overall stock of houses but will get the government off the hook on its social housing targets. Another major beneficiary will be Fianna Fail’s old friends in the construction industry who will be able to continue to do what they do best, building homes and apartments.

It's not the first time that public funds were redirected to assist major developers. The Home Building Finance Ireland (HBFI) agency was set up in 2019 to assist small builders, especially in rural areas, to provide family homes.

The core reason for this particular housing quango was to support small and medium-sized builders. However, this has now morphed into a further pot of funds for large-scale developers, significantly different from the rationale given by the government when it was first established.

One further intervention that will assist the developer was the Central Bank review of the loan-to-income ratio for first-time buyers. Billed as a measure to improve the chances of young people to purchase their own homes, the mortgage borrowing limits for first-time buyers was raised from three and a half times to four times gross income.

It will help these buyers in the short term but will also, according to most economists, lead to higher prices and more debt in an era of rising interest rates. No marks for pointing out that it will also benefit developers and the banks.

This government and this minister have struggled to come to terms with the housing crisis that continues unabated. Of course, there have been challenges, especially with the pandemic. The war in Ukraine and the refugees who fled to Ireland has also put huge pressure on accommodation.

But some decisions taken were just plain disastrous, especially the shutdown of building sites during Covid. Notwithstanding all of that, it is difficult to ignore the feeling that some sectors have an inside track when it comes to housing policy.

When it comes to gambling, the house always wins, but with this government’s housing policy the developer never loses.

*This column first appeared in the October 26 edition of the weekly Irish Voice newspaper, sister publication to IrishCentral. Michael O'Dowd is brothers with Niall O'Dowd, founder of the Irish Voice and IrishCentral.