Ireland is experiencing a "severe accommodation shortage and there is no point in denying that," Tanaiste Leo Varadkar said as Ukrainian refugees struggle to find accommodation. 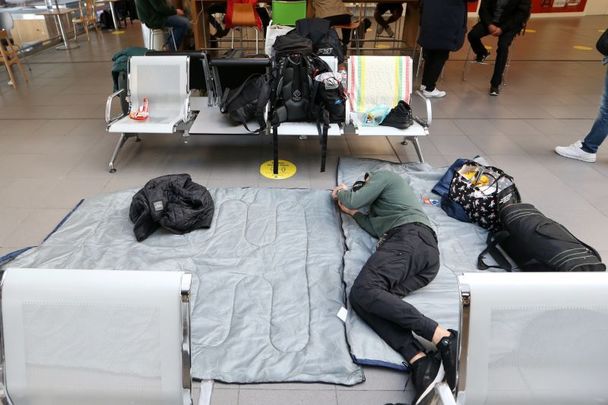 October 24, 2022: Ukrainian refugees sleeping on the floor at Dublin Airport as they are looking for accommodation. RollingNews.ie

Ireland cannot guarantee accommodation for refugees arriving from Ukraine in the next couple of weeks, Tanaiste Leo Varadkar said on Tuesday, because Ireland is experiencing a severe housing shortage.

Varadkar, speaking ahead of a Cabinet meeting with a Ukraine agenda prompted by more than 40 war refugees stuck at Dublin Airport over the weekend, said there is “no point in denying” the chronic shortage of accommodation.

But he also proudly boasted of what Ireland had done to help tens of thousands of refugees who fled Russia’s illegal invasion of Ukraine.

He added, “In what is a very difficult situation, I think the Irish public and Irish society has responded very well. But we are experiencing a severe accommodation shortage and there is no point in denying that.”

Varadkar said it needed to be said that if people fleeing war arrived in Ireland, it could not guarantee accommodation at the moment nor, indeed, for a few more weeks.

He said some measures being examined by the government included refurbishing buildings, rapid-build housing where possible, and increasing the amount of money that is given to families that are willing to take people in or provide a house.

A major proposal considered by ministers included doubling the monthly payment for people taking in Ukrainian refugees from €400 to €800.

Following the weekend when many of 44 Ukraine arrivals had nowhere to stay and were forced to sleep at Dublin Airport, a new facility for temporarily housing up to 200 refugees was set up at the airport.

Earlier, Foreign Affairs Minister Simon Coveney told RTÉ that a refugee population the size of Waterford City had been accommodated over the last six months and Ireland had “never faced a migration challenge like this before.”

Ukraine’s ambassador to Ireland Larysa Gerasko said that as far as she knew the Irish government was working on a plan, but what had happened was unacceptable and it would have been better to announce a lack of accommodation in advance.