Several Ukrainian men slept in Dublin Airport on Friday night after being told that there was no accommodation for them. 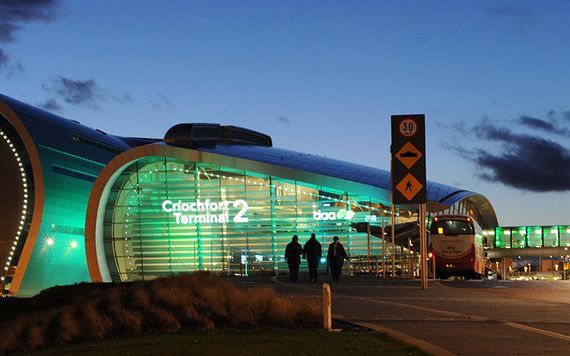 Taoiseach Micheál Martin has defended the Irish Government's response to the accommodation shortage for Ukrainian refugees after several Ukrainian men were forced to sleep in Dublin Airport on Friday after being told there was no accommodation for them.

Martin admitted that it was "not satisfactory" that Ukrainian refugees were left without accommodation on Friday but said it was "not fair" to suggest that the Irish Government should have predicted an increased need for accommodation.

The Department for Children, Equality, Disability, Integration and Youth said 33 refugees were processed and given temporary protection status at the Citywest Hub in Dublin. However, all 33 refugees were turned away due to a lack of accommodation.

All 33 refugees were single men, the Department said.

The news comes shortly after the Irish Government admitted that it could not rule out that Ukrainian refugees will not end up sleeping on the streets due to a shortage of accommodation.

Speaking ahead of the Cairde Fáil dinner event, the Taoiseach revealed that the current numbers of refugees arriving in Ireland were "not expected" to be so high.

"Certainly not before the summer they were not expected to be anywhere near higher levels than we currently have," Martin said.

"And the state hasn’t been slow. The state has been remarkably fast, I would argue, in terms of responding to a wartime situation, the worst humanitarian crisis in Europe since the Second World War.

"We’ve witnessed the displacement of well over six million people and Ireland in percentage terms per capita terms has responded in my view, in an extraordinary way, an unprecedented way, in terms of the sheer numbers we’ve already accommodated.

The Department of Children said in a statement on Saturday that over 58,000 refugees have arrived in Ireland this year, with 42,000 arriving from Ukraine.

Children's Minister Roderic O'Gorman said accommodation would continue to be offered to the most vulnerable refugees but said others would not be offered anything and said he could not rule out that some would be forced to sleep rough.

More than a dozen of the 33 Ukrainians who were turned away on Friday arrived at the Capuchin Day Centre for Homeless People on Saturday morning, all carrying luggage.

Semenchuk Andrii, who came to Ireland from Mariupol in Ukraine with his cat Musa, told RTÉ News that he "doesn't know what to do" or "where to start with".

Andrii spent Friday night in Dublin Airport and traveled to the Capuchin Day Centre for warmth and food on Saturday.

Nazar Horlev, an 18-year-old who arrived on Thursday from Kherson, spent his first night in Ireland sleeping on chairs in the crowded Citywest transit hub before spending his second night sleeping in Dublin Airport.

All of the Ukrainians who arrived at the Capuchin Day Centre are believed to have spent Friday night sleeping in Dublin Airport.