Sinn Féin look likely to form Ireland's next government thanks to public anger at the current housing crisis. 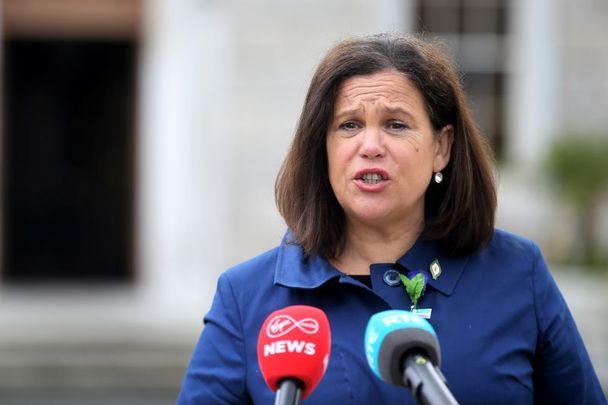 Thanks to the housing crisis here, the two big parties which have dominated Irish politics for decades are set to be decimated by Sinn Féin at the next election.

Fianna Fáil and Fine Gael have just one hope of averting this. The next election is three years away, or even close to four years away if they hang in together in government until the last minute. So there is still time for them to sort out the housing mess.

The worrying thing is that their efforts to do so up to now have been far from reassuring. The new minister for housing, Darragh O'Brien of Fianna Fáil, says he knows how to solve the problem and he will get it done.

But the new plans he unveiled over a week ago have failed to convince people according to the latest opinion poll. This is not surprising because people want dramatic action but there are no instant solutions.

The overall problem is the lack of supply of new homes. We're building less than half of the amount we need every year and it's going to take several years to turn that around. This means that both purchase prices and rents have soared.

Apart from the overall problem, which goes back to the financial crash and the collapse of the construction industry, one specific aspect of the ongoing housing mess intensified the anger here in recent weeks to boiling point. This was the revelation that foreign investment funds were bulk buying recently completed housing estates around Dublin to feed off the soaring rental market.

Borrowing limits force them into long-term renting. Owning their own home has become an impossible dream.

In this situation, the news that foreign investment funds were bulk buying new homes to put on the rental market was the last straw for many people. It provoked an unprecedented outpouring of rage at the government from all levels of society here, both those on low incomes faced with sky-high rents and the better off who would normally be able to buy but now find they cannot.

Young couples are unable to compete with the investment funds and their bottomless resources. Headlines about vulture funds filled the media in the last few weeks.

The rise of Sinn Féin

The two parties in power are being blamed for the mess to such an extent that people have completely lost faith in them and want change. Even people who previously would never have voted for Sinn Féin are now thinking of doing so. And Sinn Féin, which is promising homes for everyone, looks certain to form the next government as a result.

O'Brien's first job, therefore, was to deal with the funds situation. What he came up with was somewhat cautious.

Stamp duty (a government tax) would be increased from one to 10 percent on the purchase of more than 10 houses to discourage bulk buying. New planning rules would mean that applications for five or more houses would be subject to conditions that would force their sale to individual buyers and those eligible for social and affordable housing.

That sounded like progress. But there were some loopholes.

Even a 10 percent stamp duty is unlikely to deter pension funds with vast resources that are long-term investors. The limit on bulk buying only lasts for two years -- if houses in a new development remain unsold after that they can be bought in bulk by a fund.

Any developments already under construction or in the planning process are not covered. And most important, the new rules do not apply to apartment developments.

In fairness to the minister, this is a legally difficult area because of constitutional property rights. But what he has done seems inadequate and has done little to dampen down the anger here. In particular, the fact that the rules do not apply to apartments is a real concern.

Let me give you one example which happens to be close to where I live in the fishing village of Howth on the north side of Dublin. The former Techrete cement works near the harbor is one of the best sites ever to come on the market in the area because of its location beside a beach. The five-acre site has been derelict for years because the original developer who bought it went bust in the crash and the site ended up in Nama, the state agency for bad property loans.

After years of planning battles, the site was eventually sold to Marlet, an Irish development company with permission for over 500 apartments and shops. This sparked a lot of interest both from retirees looking to downsize and young couples who fancied living in such a spectacular location.

But now it has emerged that the apartments cannot be bought. They will be available to rent only because the entire development is being sold to an investment fund.

And in fact, it is part of a much bigger plan. Marlet has bundled the Howth development with five other sites it is developing in prime locations around Dublin -- a total of over 2,000 apartments and homes -- into a portfolio that is now being marketed to the big international funds as a package.

The original indicative price was €1 billion but such was the level of interest from around 10 of the biggest international funds – Kennedy Wilson, Blackstone, Lone Star, etc. -- that a second bidding round is now underway and the final price for the package is likely to be much higher. So none of these homes will be available for individual people here to buy.

Most of this Marlet package is apartments but all of the developments are already in the planning process anyway so are excluded from the new rules. One can be critical of Marlet since it's an Irish development company, but this makes perfect sense from their point of view.

Pre-selling all the portfolios as a package avoids financing problems and also avoids the cost and hassle of selling apartments to individuals. The whole deal and the profit involved are guaranteed upfront.

An opportunity for investment funds

Because Irish banks and institutions are still recovering from the crash, they are very cautious about getting involved in the property market here. Developers find it almost impossible to get full, upfront financial backing from them. And this has kept the door open to the international funds who have the resources to get involved.

In fact, the involvement of these funds here is nothing new. It goes back to the crash and the efforts by Nama to sell on the bad property loans it had taken over from the Irish banks.

No one else was willing to buy into the Irish property market at the time. And to encourage the funds they were given discounts and special tax treatment. Some of those incentives are still in place.

The recovery of the Irish economy and property market has also provided an incentive for the funds to be active here. Money is cheap globally and returns are low. So the Irish property market with its high rental returns is an attractive proposition for international funds.

The funds have pumped around €9 or €10 billion into the rental property sector here since the crash, with around €4 billion of that being invested in the last three years.

There are two ways of looking at this. You can say it's a disgrace and that it's back to the days of foreign landlords. Or you can say that we'd be in an even worse housing situation if the money had not been invested here. Foreign investment is a plus and does not stop Irish financial institutions from getting involved.

When criticized for excluding apartments from the new rules, O'Brien made the point that most of the apartment developments here in the last few years would never have been built without this foreign investment. The Construction Industry Federation says that the foreign funds financed over 90 percent of the apartments built here in the past two years. Irish banks and pension funds are too risk-averse to get involved on the scale required.

What all this shows is that the situation here is far more complex than most people realize.  The bottom line is that any investment that comes in here to finance new homes must be welcome. The more homes that are built the better, even if they are only for the rental market.

Eventually, increased supply will stabilize rents and drive down house prices. That is what O'Brien is focused on, although whether it will happen fast enough to save Fianna Fáil and Fine Gael at the next election seems unlikely.

Meanwhile, we have Sinn Féin and the left shamelessly playing populist politics with this, promising to ban international funds and to finance a massive home-building program with Irish state borrowing.

Whether this can be done is far from clear, not least because of our huge existing national debt, now made even worse by the pandemic. It also ignores the fact that private builders here will still have to do most of the work and there are acute staff shortages and rapidly rising material costs in the sector.

In spite of the housing shortage, local politicians here are still opposing many new developments when existing homeowners in their areas object because of density, overcrowded schools, traffic problems, and so on. Most of this is NIMBY (Not In My Back Yard) stuff and should be ignored if we are ever to solve the housing problem here.

But that does not stop the politicians, and Sinn Féin is among the worst. They have stopped or delayed the building of around 5,000 new homes in Dublin in the last few years.

The truth is that Sinn Féin doesn’t want to solve the housing crisis. Or at least not yet. They want to use it to get into power first.