Mary Lou McDonald addressed the Dáil on Wednesday and criticized soaring house and rental prices in Dublin, which she said was highlighted by the growing number of tents in the city center. 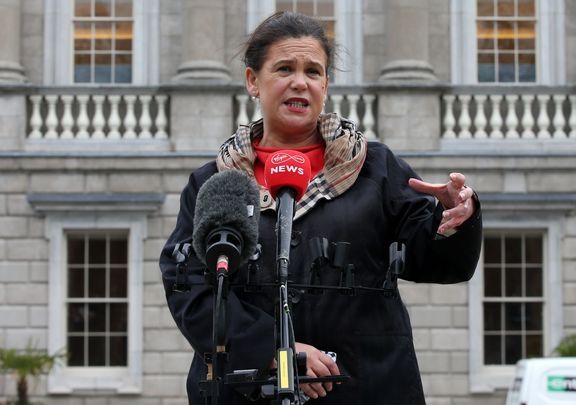 Sinn Féin President Mary Lou McDonald has called for rents in Ireland to be cut and urged the Irish Government to introduce bans on rent increases.

McDonald addressed the Dáil on Wednesday and criticized soaring house and rental prices in Dublin, which she said was highlighted by the growing number of tents in the city center.

McDonald drew attention to a "shameful" and "heart-wrenching" image of a four-year-old homeless girl eating dinner from a plastic tray while sitting on a crate outside a homeless kitchen in Dublin.

"It’s not the first time that we’ve seen a child eating their dinner in similar circumstances, and this, I suppose, is the sharpest edge of bad policy and of bad government which has seen house prices go up and up," McDonald told the Dáil.

She said homelessness is a direct result of Ireland's rising house prices and noted statistics from the Central Statistics Office which indicated that house prices in Dublin have increased by 96% over the past nine years.

"These aren’t mansions, by the way, these are modest family homes, and meanwhile extortionist rents continue to soar," she said.

"This generation has had to put their lives on hold, they’ve had to curtail their aspirations, because Government continues to choose policies that make the situation worse."

Sinn Féin’s Mary Lou McDonald criticises the Government’s approach to housing, saying that rents should be cut and increases in rents should be banned. | https://t.co/5uPFLovNpe pic.twitter.com/uqdLNXSpcM

Rent prices in Ireland have almost doubled in the past ten years, with the average rent in Ireland now standing at €1,414 per month. In some areas of Dublin, the average monthly rent now stands at over €2,100, although Dublin rent prices enjoyed a slight decrease during the COVID-19 pandemic.

However, the average monthly rent in Ireland at the end of 2020 was 0.9% higher than the previous year and McDonald called on Taoiseach Micheál Martin to intervene on behalf of renters and ensure that evictions remain banned for the foreseeable future.

"But above all, we need to ensure that rents are cut and that increases in rents are banned," she said during Leaders' Questions in the Dáil on Wednesday.

She also called on the Government to build affordable housing that is "actually affordable".

Martin responded by saying that housing is one of the Government's main priorities and pledged to build 50,000 social houses over the five-year lifetime of the Government. He said that €3.3 billion had been allocated to fund the "largest social housing program in the history of the state" and said that family homelessness had been reduced by 42% in recent years, while overall homelessness had decreased by 19%.

However, he conceded that more needs to be done to tackle the issue of homelessness in Ireland.

McDonald later took to Twitter to criticize the Taoiseach over his response, claiming that he evaded the issue of Ireland's soaring rents.

"On the basis of his non response and evasion, I can only conclude that the Taoiseach does not believe that rents are too high, that rents need to be cut and frozen, that generation rent needs a break. Shameful stuff from the chaos government," McDonald said on Twitter.

On the basis of his non response and evasion, I can only conclude that the Taoiseach does not believe that rents are too high, that rents need to be cut and frozen, that generation rent needs a break. Shameful stuff from the chaos government.

Homeless charity Focus Ireland said in January that there are 8,313 homeless people in Ireland, with the number of homeless families increasing by 232% since July 2014. The charity says that Ireland's "broken housing system" is responsible for the rapid rise in homelessness over the past decade.

More people are renting homes in Ireland than ever before due to a combination of a halt in the building of private homes and a lack of social housing provisions, according to Focus Ireland, with almost one in every five households now living in rented accommodation. In contrast, one in ten households was renting ten years ago.

"This has led to enormous pressure on the private rental market which has resulted in constantly rising rent levels and a lack of properties to rent," Focus Ireland said.

A total of 966 families and 2,366 children were using emergency accommodation in January, the charity said.

Focus Ireland also said that the Irish Government has failed to provide better access to affordable housing for people in need.