Irish America is being called upon to "use your connections and influence to make sure that the Irish Government grant 100% Redress for Mica and Pyrite affected families." 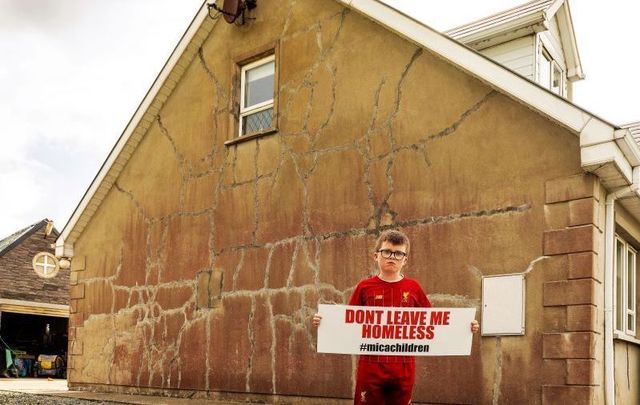 A child stands outside of his home that has cracks in its walls. Courtesy Mica Action Group

As Micheál Martin makes his first visit to the United States as Taoiseach (Irish Prime Minister), the lifting of restrictions on Trans-Atlantic travel is being announced and many of us might begin to make plans to go visit our beloved localities, friends, and family on the other side of the pond for the first time since the pandemic.

Anyone who visits the counties of Donegal, Mayo, Sligo, Clare, or Limerick might get a bit of a shock though, you might be visited by that crushing feeling that Oisín had when he returned home from the mythical island of Tír na nÓg to find his castle in ruins.

It may have only been a couple of years since you were last there, but you will be shocked to see family homes, community centres, and church buildings all across the West and North of Ireland with huge gaping holes and massive cracks in them, crumbling before your very eyes, scheduled to be demolished along with over 8,000 such buildings.

How can this be?

The problem is down to a lack of regulation during the Celtic Tiger period and a thing called Mica, a substance similar to Pyrite or Pyrrhotite that absorbs moisture before expanding inside the building blocks used to build these houses, which causes these buildings to crack and crumble.

Been a busy day with Twitter Storms and position papers, but I'll leave you with the reality of mica for families in Donegal

Children and parents alike are suffering from mental health problems such as anxiety, insomnia, and suicidal ideation as families who didn't do a thing wrong find themselves in the middle of what is arguably the greatest existential threat to hit Irish families since the famine.

Thankfully, this dystopian fairytale has its heroes, and all hope is not yet lost. Paddy Diver of Carndonagh, Co Donegal shot to national fame when he refused to let the company that is responsible for the defective blocks from entering his neighbour's driveway to make a delivery.

Through social media, Paddy beckoned others to join him and in June of this year, "Paddy's Army" descended on Dublin from all parts of the North and West of Ireland to hold what Gardaí (Irish Police) hailed as one of the most impressive protests they had ever seen.

As Paddy and others of the Mica Action Group went into Government Buildings to meet with Housing Minister Darragh O'Brien, tens of thousands surrounded Leinster House, playing music and chanting, even some bikers came by growling the engines of their Harley Davisons so that the vibe outside could be felt right at the heart of Government. 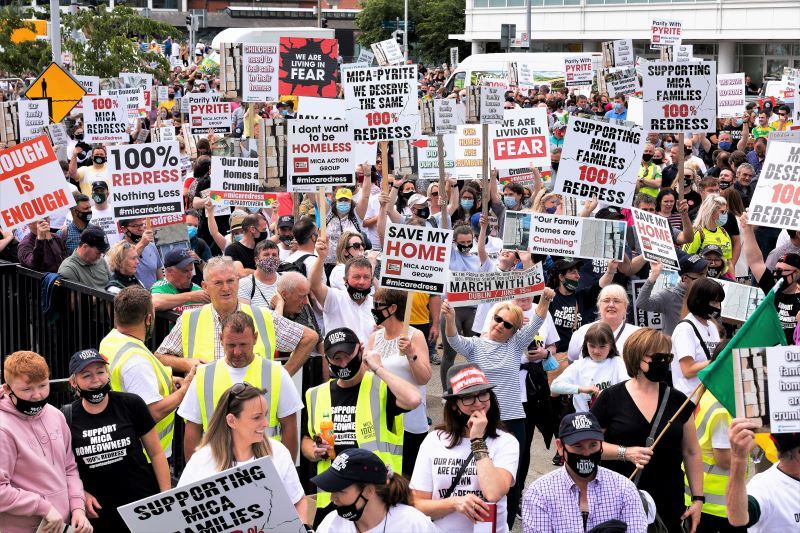 Since then, the Mica Action Group has been attending a series of high-level Working Group meetings with senior servants and staying in close contact with politicians inside and outside of government.

So crucial is this issue to so many that this week, it was stated in the Sunday Independent newspaper that not meeting the Three Pillars of the demands of the Mica-affected homeowners (100% redress, state-backed guarantee, and no homes excluded) has the potential to collapse the government as additional TDs (Members of Irish Congress) from the Fianna Fáil, Fine Gael and Green Party coalition may well join Sligo/Leitrim TD, Marc MacSharry in resigning.

The result of a new General Election would almost certainly see the election of the first Sinn Féin-led Government in recent times, so the pressure is really on Micheál Martin (Fianna Fáil), Leo Varadkar (Fine Gael), and Eamon Ryan (Green Party) to get this right.

How can you help?

Well, it just so turns out that the epicenter of this crisis is the Inishowen peninsula in Donegal, the ancestral home of the late great Tip O'Neill who gave us that world-famous adage about all politics being local.

So Irish America, your people back home really need you, we need you to remember the lessons taught to us by Tip and other great Irish Americans, we need you to ask yourself what you can do for Ireland; to use your connections and influence to make sure that the Irish Government grant 100% Redress for Mica and Pyrite affected families without losing any more time.

As Paddy Diver has said, we don't need to wait for somebody to be killed by a falling wall before we see the Government do the right thing. The whole country is united behind this cause; this week Catholic, Church of Ireland, and Presbyterian leaders signed a letter in support of 100% Redress, No Less.

With the Taoiseach in New York, Diver is urging Irish and Irish Americans "put the pressure on:"

Shout out to any Irish people in New York@MichealMartinTD has arrived in New York and it's the perfect chance for us to bring more attention to the disgraceful treatment of mica and pyrite homeowners in Ireland#MicaRedress pic.twitter.com/1Hw5MfLc8l

Please contact each of your elected representatives and have them reach out to Micheál Martin, Leo Varadkar, and Eamon Ryan to make sure they know very clearly that Irish America stands with the people of Donegal, Mayo, and the other affected counties and that we will not rest until every child in Ireland feels safe in their beds at night, because as it stands families are living a nightmare.

To learn more, follow Paddy Diver and the Mica Action Group on Twitter. Join the 100% Redress, No Less Facebook group, and stay up-to-date on MicaActionGroup.com. You can also use the hashtags #MicaRedress, #MicaBig3, #100PercentNoLess, and #AmericaStandsWithMicaFamilies to stay involved.

This could mean the difference between Ireland losing yet another generation to emigration, or not.