Several Donegal homes have been condemned, forcing homeowners into rental accommodation while still paying off mortgages for houses that have been deemed unsafe to live in. 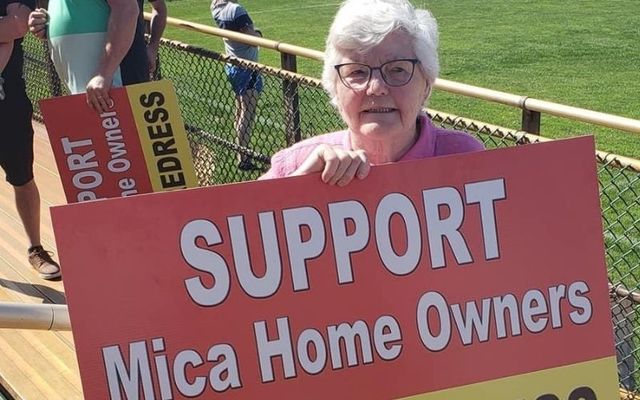 The Irish community in Boston has launched a fundraising and awareness campaign to support victims of the mica housing scandal in Donegal.

It emerged several years ago that the mineral muscovite mica was present in concrete blocks used to build a large number of properties in Donegal. The substance affects the cohesion of the cement, impacting the durability of walls and damaging the structural integrity of a significant number of properties.

Several homes have been condemned, forcing homeowners into rental accommodation while still paying off mortgages for houses that have been deemed unsafe to live in.

The Irish Government launched the Defective Block Scheme in January 2020 in response to the scandal, offering to cover 90% of remediation works with homeowners paying the remaining 10%.

More than 430 homeowners have applied for funding as part of the Defective Block Scheme.

However, homeowners argue that the scheme is inadequate and say that they could pay more than €100,000 for repair work. They also say that it is impossible for them to get a mortgage to cover the costs of the repair work.

Homeowners from Donegal will march to Leinster House in Dublin on June 15 in protest of the Irish Government's handling of the scandal. They contend that the Government should cover the full cost of remediation works, instead of the 90% it has offered.

Groups from Donegal argue that affected homeowners should be given the same treatment as Dublin homeowners affected by the pyrite scandal between 1997 and 2013, who received full compensation for remediation work.

In Boston, a number of Donegal natives have launched a fundraiser to support and raise awareness for Tuesday's protest.

McKinney said that the group is trying to raise awareness of the issue and said that they are currently attempting to secure long-term funding from local businesses. The group is also in the process of registering as a 501c3 organization.

The Donegal native said that he was worried that the Government will fail to act until it's too late.

"It's a fear of my own that the Government isn't going to act until they have to react; until a house comes down on top of a family. It's then that they'll take action and it's too late at that stage," he told IrishCentral.

He said that he rejected the Government's proposal of a 90/10 split and stated that homeowners were actually paying closer to 50% when additional costs were considered.

"The Government rightfully covered 100% of Pyrite homes in north Dublin and also covered extras like rent and storage. People in Donegal aren't getting these benefits."

Residents affected by the mica scandal are required to pay €1,500 for a planning application to carry out repair work on their homes, while they also must pay €5,000 to have the home assessed as part of the Defective Block Scheme. In comparison, Dublin residents paid just €500 to have their homes assessed during the pyrite scandal.

They must also cover VAT payments in addition to covering 10% of the total costs.

McKinney said that groups from Donegal are campaigning for full Government compensation for the repair work.

Taoiseach Micheál Martin said last week that the Government will provide €1 billion in funding between now and 2030. However, he said that the mica scandal was not comparable with Dublin's pyrite scandal, arguing that the total cost of repairing homes in Donegal is likely to be more than double the cost of repairing Dublin homes.

"You’re looking at a far more substantial allocation to each home in Donegal than you would have had in the pyrite situation, so they’re not comparable," Martin said last week.

A typical example of the homes thousands are, or will be, living in because of defective blocks. #Donegal #micaredress. Through no fault of their own. pic.twitter.com/RM1rcgJThL

Eileen Doherty told the Journal that homeowners were not responsible for the scandal and should not be expected to cover a significant portion of the costs.

"He said this scheme will cost far more than the pyrite one, that’s unfortunately due to ineptitude and a lack of governance that is not the fault of homeowners," Doherty told the Journal.

"We don’t want to cost taxpayers money, but let’s be clear here, we are taxpayers too. It’s not fair to say they’re not comparable, the government should have thought about that before it presided over a system that allowed this to happen."