A Sinn Féin motion calling for 100 percent redress in the mica scandal was introduced in the Dáil on Tuesday and is expected to receive government support. 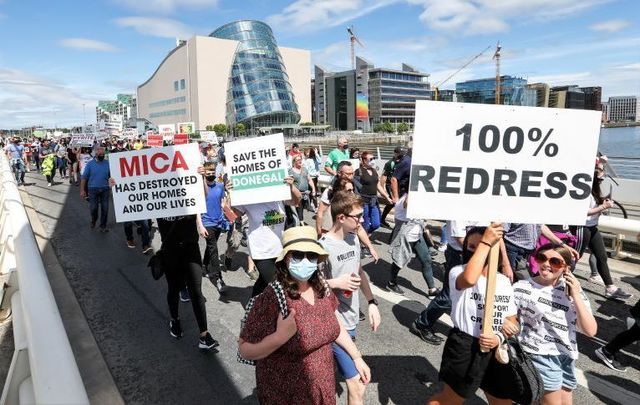 June 15, 2021: Large crowds of people crossing Samuel Beckett Bridge in Dublin as they march from the Convention Centre to Leinster House in support of a 100% redress scheme for homeowners affected by the mica scandal. RollingNews.ie

Thousands of people, primarily from Donegal, Mayo, and Clare, marched in Dublin on June 15 as Sinn Féin introduced a motion calling for 100 percent redress for homeowners affected by the mica scandal.

Several years ago, it emerged that the mineral muscovite mica was present in concrete blocks used to build a large number of properties, primarily in Donegal but also in Mayo and Clare.

The substance affects the cohesion of the cement, impacting the durability of walls and damaging the structural integrity of a significant number of properties.

Several homes have been condemned, forcing homeowners into rental accommodation while still paying off mortgages for houses that have been deemed unsafe to live in.

This is our forever home. Built in 2004. Most likely demolished 2021. Please March with Donegal and Mayo homeowners on 15th June in Dublin pic.twitter.com/FJvGtTUxnj

The issue is hardly isolated - a map that is continually being updated shows the scale of the problem across the North and West of Ireland:

Homeowners, however, argue that the scheme is inadequate and say that they could pay more than €100,000 for repair work. They also say that it is impossible for them to get a mortgage to cover the costs of the repair work. Less than 500 homeowners have applied for the grant.

Amongst the organizers of the massive march on Tuesday was the Mica Action Group (MAG), based in Co Donegal. Paddy Driver, a key member of MAG, said in a tweet that he and other activists were able to meet with Housing Minister TD Darragh O'Brien on Tuesday:

The whole gang after meeting with Minister @DarraghOBrienTD where we told him 100% and no less.

Today was a victory for the wee man. Let this be an example to future generations that the power of the people is greater than the people in power.

We cant stop here and we wont stop pic.twitter.com/Hu5t0iaiQh

This will not be a talking shop, & we will work to address outstanding issues. People who bought or built a house in good faith are in a horrific situation through absolutely no fault of their own. I want a scheme that works & which provides a pathway out of this scourge.

The massive march coincided with Sinn Féin introducing a motion in the Dail on calling for 100 percent redress for those affected by the mica scandal.

Earlier in the day on Tuesday, Mary Lou McDonald, the President of Sinn Féin, said on Twitter that the government is set to support the motion.