"If emotive arguments are allowed to take center stage, there is every chance that the Rubicon will be crossed and assisted suicide will become legal in Ireland." 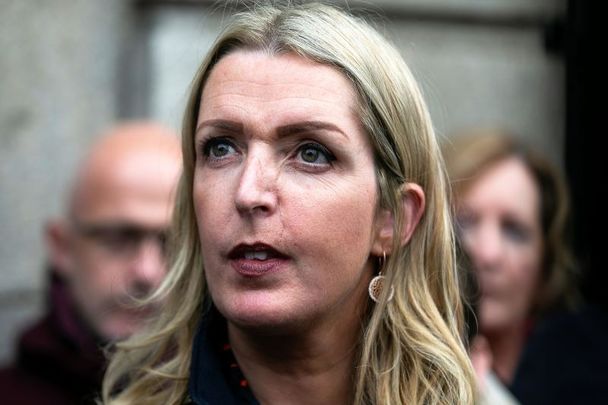 October 22, 2019: Vicky Phelan, surrounded by some of the 221 cervical cancer patients who received an incorrect smear test, leaving the Dáil after hearing the Taoiseach apologize to the victims of the CervicalCheck scandal. Phelan has come out in support of assisted dying in Ireland. RollingNews.ie

As we entered into the new year, Sinn Féin President Mary Lou McDonald made clear what one of her key priorities would be for 2022, namely a full public debate on assisted dying.

The political system, she stated, “had dragged its heels” on the issue, and the campaign to introduce laws to give terminally ill people the option of medically assisted death, had made “a really compelling case.”

While McDonald professes to have an open mind on the issue, it’s pretty clear where her sympathies lie and, in that respect, she is in lockstep with other political parties including Labour, People Before Profit, and the Green Party that have stated their support for legislative change.

But is the case really so compelling, and what of those who have strong objections and reservations and believe that any change in the law will not only address the terminally ill but will inevitably descend into targeting the old and disabled, essentially those who already struggle to have their voices heard?

And that really is the problem as lawmakers in Ireland in July of last year rejected legislation that was deemed to have insufficient safeguards for the elderly and vulnerable, and instead committed to set up a special committee to examine the matter.

All sides agree that this is a sensitive and emotive topic, and it’s interesting that the main proponents of change come not from the political world but from a background of struggling with difficult, indeed overwhelming health problems.

People like Vicky Phelan, a terminally ill cervical cancer campaigner, are very much at the forefront. She recently ceased chemotherapy in order to be with her children for Christmas and has stated that in order to spare her children from seeing her suffer, she does not want to prolong her life.

Hers is a captivating story involving the loss of a boyfriend in a car accident which also left her with serious injuries. Following this, she gave birth to a daughter with toxoplasmosis, a disease that can cause blindness and brain damage.

However, what brought Phelan to prominence was successfully taking the Irish government to court for medical negligence when she had incorrectly been given the all-clear from a smear test carried out during a cervical cancer screening program.

Tom Curran is another campaigner in the vanguard of the assisted dying movement. His partner, Marie Fleming, took a landmark case to the Irish Supreme Court challenging the ban on assisted suicide.

She argued that, as a disabled sufferer of multiple sclerosis, she had a constitutional right to receive assistance to die. Her case was dismissed by the courts in April 2013 and she died eight months later.

Curran is now extremely active in the assisted dying movement. He is one of three directors of Exit International, an Australian registered right-to-die organization whose founder, Philip Nitschke, is also known as Dr. Death.

However, this association with Exit is problematic for the campaign in Ireland which is insisting it is all about choice for the terminally ill. Exit, in contrast, campaigns for assisted dying for the elderly and those who are depressed. It gives fuel to those who argue that the ultimate goal is to introduce legislation in Ireland that will target those less well able to cope with societal pressure.

On the other side of the argument is a collection of civil society groups, medical associations, and faith-based organizations. The Iona Institute falls into the latter category, a Catholic advocacy group. Its position is clear and unambiguous -- however well-intentioned, assisted suicide enables the violation of the right to life of some of the most susceptible human beings as well as corrupting medical culture.

Medical professionals are also opposed to the introduction of any proposal to legalize physician-assisted suicide. The College of Psychiatrists in Ireland has come out strongly. The group says that assisted suicide is “contrary to the efforts of psychiatrists, other mental health staff and the public to prevent deaths by suicide.”

They believe it will place the weakest citizens at risk as they will dread becoming a burden and, once introduced for limited cases, it will be applied broadly to other groups. Similar reservations have also been expressed by the Irish Palliative Medicine Consultants’ Association, the Irish Society of Physicians in Geriatric Medicine, and the Royal College of Physicians.

Also piling in against legalizing assisted dying are disability advocacy groups. The Independent Living Movement Ireland (ILMI) is a campaigning, disabled person’s organization that promotes the philosophy of building an inclusive country. Its position is that opposition to assisted suicide legislation is not just confined to the medical profession and religious groups.

Most importantly, they say, it includes the very people that would be most affected by any change in legislation -- disabled people and their lived experience costs and values. The real discussion, according to ILMI, is about providing the resources to live with dignity rather than creating a legal framework that protects those who assist with suicide.

When these arguments were legally tested in the Marie Fleming case, the opinion of the courts was very clear and authoritative. They ruled that a “pandora’s box” would be opened that would be impossible to close afterward, with the risks of abuse "all too real.”

The High Court stated that they had heard "deeply worrying" evidence from doctors there would be "a paradigm shift" with "unforeseeable and perhaps uncontrollable" changes in attitude and behavior regarding assisted suicide, and that it would be impossible to ensure that the aged, the disabled, the poor, the unwanted, the rejected, the lonely, the impulsive, the financially compromised, and emotionally vulnerable would not avail of this option to ensure they would not become a burden on family and society.

That was in 2013 and, if anything, medicine has progressed to ensure better management of chronic pain which is often cited as the main reason why the terminally ill would seek assisted dying.

It should of course be remembered that in Ireland, as in practically every other country, the option of what is euphemistically termed the palliative sedative is available. This allows a medical practitioner to induce unconsciousness with the objective to reduce or eliminate suffering.

In most cases, the patient will pass away without regaining consciousness. It is legal and ethically accepted by all major religions.

So, it seems inevitable that this question will be discussed in the coming year. The terms and parameters of that debate will be crucial.

If it is based on medicine, science, and concern for the more vulnerable, the law will stay as-is. However, if emotive arguments are allowed to take center stage, there is every chance that the Rubicon will be crossed and assisted suicide will become legal in Ireland.

If that happens, it will be the thin end of a wedge that will inevitably put society’s outsiders, “your tired, your poor, your huddled masses,” at risk.

*This column first appeared in the January 12 edition of the weekly Irish Voice newspaper, sister publication to IrishCentral. Michael O'Dowd is brother to Niall O'Dowd, founder of the Irish Voice and IrishCentral.