"Police departments already in crisis from high numbers of infections and transmissions, are now fighting the vaccine mandates through their police unions." 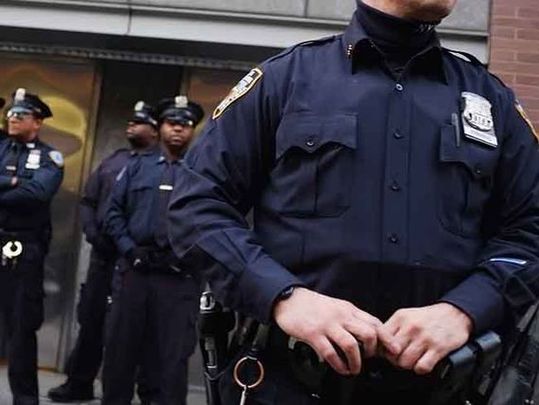 For some American police there's now a choice: a Covid vaccine or they lose their job. Getty

This week you will finally hear more discussion about an astounding statistic: five times as many police officers have died from Covid-19 than any other cause, including from gunfire since the pandemic began

It's a statistic that confirms what our eyes have already told us, that large pockets of police enforcement refuse to wear masks or be vaccinated, despite the obvious dangers to themselves and others.

Doctor Anthony Fauci, the nation's top infectious disease expert, is mystified by the continuing resistance, saying that it “doesn’t make any sense” because “more police officers die of covid than they do in other causes of death.”

#NYC #NYPD harassing this subway rider for having the nerve to ask them to put on masks! #notabovethelaw@NYCMayor pic.twitter.com/iEK8qKh0MF

Nationally, police departments already in crisis from high numbers of infections and transmissions, are now fighting the vaccine mandates through their police unions and some individual officers have simply walked off the job rather than face the jab.

The resistance is hard to understand when you consider that Covid-19 was the leading cause of death for police officers in 2020 and 2021, according to the Officer Down Memorial Page, which records the on-duty deaths of U.S. police officers nationally.

But instead of rolling up their sleeves to serve and protect police unions and officers are instead filing lawsuits to resist the mandates, resulting in unpaid leave and staff shortages as police departments scramble to fill their daily beats.

It seems extraordinary, considering what we have all just lived through – and are in fact are still living through – that there could still be such pockets of deep resistance, holding out on the tools that we have to fight this epidemic, but here we are.

In Chicago last week the grandstanding Fraternal Order of Police President John Catanzara, instead of protecting his member's health, was openly encouraging them to defy the city’s Covid-19 vaccine policies. A Cook County judge had to directly intervene to order Catanzara to stop making his misleading public comments, demonstrating how anarchic the situation is rapidly becoming.

Likewise in Baltimore, the head of the police union encouraged officers not to reveal their vaccination status in compliance with the city's new vaccine mandate, which is scheduled to go into effect this week.

In San Fransisco at least 180 employees of the police, fire, and sheriff’s departments reportedly remained unvaccinated as the deadline to get the shots passed last week, setting up yet another angry confrontation between their departments and city officials.

Data shows 43% of NYPD officers are vaccinated, which is among the lowest rates of city agencies. But @NYPDShea clarified "that's shots administered by our own people." He expects that number to be higher overall and said employees aren't required to report their vaccine status. pic.twitter.com/yWwqCugZAc

Meanwhile in Los Angeles, in the kind of numbers repeated from coast to coast, more than 2,600 LAPD employees are reportedly seeking religious exemptions for their mandated vaccinations.

“I personally find it appalling that the personnel of a department charged with public safety would willfully, intentionally and brazenly endanger the lives of those who they have taken an oath to protect,” William Briggs, president of The Los Angeles Police Commission, told the press last week.

In a reminder that vaccine refusal is not only limited to law enforcement, a group of 500 Los Angeles firefighters also filed a lawsuit over a vaccine mandate last week, with reporters claiming that just a third of the city’s firefighters have reported receiving one.

Again the strength of the resistance is completely inexplicable when you consider that 3,142 LAPD personnel have reportedly tested positive for the coronavirus since the start of the pandemic.

So given the resistance, and the fact that this resistance is national, why are cops so afraid of the vaccine? Why do officers who put their lives on the line every day in one of the nation's most undeniably dangerous jobs continually balk at it?

Could it be that the most influential Trump-supporting, Fox News watching, Long Island living members here who are forced to police blue cities simply can't help but offer a giant middle finger to pointy-headed scientists and pants wetting city politicos?

Could this mandate resistance be their own insurrection moment, where they defy conventional wisdom the way Trump once defied mask-wearing (before he caught Covid-19 himself)?

In Europe, the Italians, who are among the most pragmatic people on earth, were also among the hardest hit by the virus. Because of that fact they no longer have patience with people whose actions prolong the Covid-19 infection and transmission cycle.

When Italy faced vaccine resistance from the usual sources they found a novel solution. You can refuse the free vaccine shot the government said, but if you want to work or visit a restaurant or shop or go to a gallery or museum or church you will have to take an expensive and uncomfortable PCR test, at least once or twice a week, to prove you have not contracted or are spreading the virus.

After seeing the sticker shock, the holdouts soon came to heel. That sensible approach may be the one to lead with here too.