Colin Powell "will stand out as one of the great American success stories, a man who overcame prejudice to attain some of the highest offices in the land." 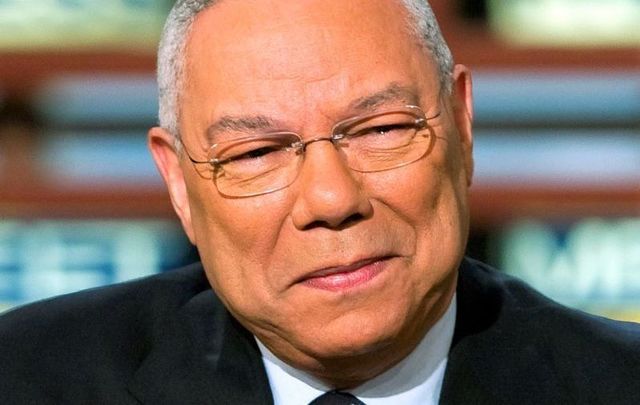 Colin Powell made you feel good about America. The Bronx-born son of Black immigrants from Jamaica smashed every stereotype imaginable on his way to becoming a four-star general and chairman of the Joint Chiefs of Staff, as well as becoming secretary of state and national security advisor.

In his 1995 autobiography My American Journey, Powell referred to his Irish ancestry.

Genealogists traced his family tree back some eight generations to a former dean of Kilfenora, Co. Clare, Reverend Charles Coote.

General Sir Eyre Coote (1760-1823), second son of the dean, was governor of Jamaica for two years, from 1806 to 1808. According to the Irish Examiner, while there, he fathered a child by a Black slave girl, Sally, who was Powell’s great great great grandmother.

A professional soldier for 35 years, Powell rose to the rank of four-star general and oversaw 28 military and political crises including the Afghanistan and Iraq wars. He was a ubiquitous figure during the Reagan, Bush Senior, and Bush Junior years.

In more recent times he was no fan of Donald Trump, calling him “intolerant” and incapable of “understanding our history.”

He had Trump and his ilk tabbed back in 1994 in an address at Howard University.

“There is utter foolishness, there is evil and there is danger in the message of hatred or of condoning violence, however cleverly the message is packaged or entertainingly it is presented,” he said. "We must find nothing to stand up and cheer about or applaud in a message of racial or ethnic hatred."

He even mulled over running for the White House before Barack Obama hit the national scene. There is little doubt Powell would have made a fine president given his massive experience in so many areas of government.

In the end, he stepped outside his GOP party line and endorsed Obama for president in 2008, a courageous and important decision that influenced many Republican moderates.

Powell was that very rare bird, a Black leader who transcended race, one who overcame personal slights and race-baiting to hold some of the most important positions in the U.S. government. One can only imagine the obstacles he overcame, especially in the 1960s and ‘70s when he was making his name.

Nowadays it is not unusual to see African American leaders in the military (current Secretary of Defense Lloyd Austin is a former military veteran).

When you saw Powell at the center of every debate on the use of force, you sensed here was a man who would think rationally and soberly and not be rushed into any premature actions.

Of course, that was not the case in Iraq where Powell was sold a bill of goods by President George W. Bush and others, and went to the United Nations in 2003 with a briefing book full of misinformation about Saddam Hussein hiding nuclear weapons. The information was false and later proven as such, and it was a major blot on his career.

But even Homer nods, and Powell’s achievements will long outlast his major error in trusting faulty information peddled to him by Bush Junior and others.

He will stand out as one of the great American success stories, a man who overcame prejudice to attain some of the highest offices in the land. He deserves our admiration and thanks.

*This editorial first appeared in the October 20 edition of the weekly Irish Voice newspaper, sister publication to IrishCentral.