The Trump administration has so disastrously failed the coronavirus challenge that Americans will not be welcome in most of Europe this summer. 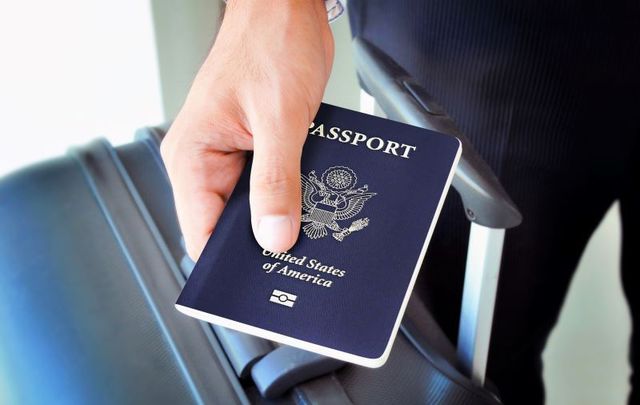 Americans have been barred from traveling to most of Europe for the time being. Getty Images

Donald Trump doesn't need to build a wall if no one wants to come to the United States, or even to welcome Americans abroad.

Known for their love of imposing travel bans on other nations, the White House was taken aback to hear that the United States has now been added to a major travel ban too.

The ban on American travelers throughout most of Europe means that we are now on par with Brazil and Russia as yet another no-go nation headed up by another complacent authoritarian, thanks to the out of control rate of transmission and lack of leadership here.

But Cuba, Vietnam, and even China on the other hand will be welcomed into Europe with open arms, thanks to the robustness of their coronavirus fight, as we place first on the list of top offenders.

You can see the actual moment when VP Pence's soul would've left his body if he still had a soul. pic.twitter.com/gmeVAUxTvf

Trump, busy signing executive orders to protect Confederate statues, clearly doesn't care about the ban. But if you had planned a Roman holiday or a romantic weekend in Paris soon you can simply forget it, they won't be letting you in.

It also turns out the European national health care system simply beats the pants off the private, overpriced, and inadequate American health care version that we have here. As they made leaps and strides to contain the viral spread we have instead fallen off a very predictable precipice.

Take Florida, it has one third the population of Italy but Friday's single day case numbers in the sunshine state were higher than Italy at its peak.

The current surge in #COVID19 cases in the USA is the largest day-on-day increase America, or any other country, has experienced since the #coronavirus crisis started in Wuhan in December.
MORE pic.twitter.com/xSdHsQcxh4

Given that fact, and the hell Italy passed through in their successful national effort, why would they open their airports to us on July 1? We aren't just on Europe's do not enter list, we are on the very top of it, for our abject failure to contain COVID-19.

Trump promised to make America Great Again but instead, he has piloted it toward an iceberg, in full view of the whole planet, assuring us that these troubles would magically vanish courtesy of some bleach and summer sunshine.

Meanwhile, Trump doesn't welcome coronavirus tests because tests will find cases and cases will prove the measure of his failure. That failure is noted with alarm in Europe, which has closed its doors (Canada has done likewise).

On Friday afternoon, the Vice President of the United States Mike Pence went before the nation's press and lied through his teeth.

Pence said the transmissions are contained to a few hotspots. He did not add that those hotspots are the largest metropolitan areas in the United States.

If, as medical experts claim, there are ten infections for every one detected, that means at least 400,000 people have just become infected. Fatalities will soon follow but the White House is only congratulating itself for its handling of the crisis. It beggars belief.

Well, this makes the point https://t.co/372K1DTrKo

I have repeatedly written about what are America's failure to confront its epidemic of gun violence looks like to the outside world. Add to that now Trump's inability to look after public health (he's launched a challenge to Obamacare this week in the middle of a pandemic) and the public welfare, as 45 million found themselves unemployed.

Tourists increasingly feel unsafe here and are voting with their feet, ensuring the European travel ban will not only prevent us from taking that summer vacation, but it will also prevent Europeans from wanting to come here too.

Millions of ardent Trump supporters have clearly decided that wearing a mask is an impermissible concession to the culture wars, so they ostentatiously refused to wear them at his recent Tulsa rally debacle, and later in that Arizona church and hate rally, where his decision to mock Asian people with a racist gibe won the largest cheer from the conservative Christian and mask-less crowd.

Here’s the scene 3 days ago at Trump’s rally in Phoenix. Ducey attended the rally and did nothing to stop it. pic.twitter.com/31qTug96PB

Consider this, when you are prepared to risk your own life and everyone else's to make a foolish political point to the people you ardently oppose, you have surrendered the right to be taken seriously.

Trump and Pence and the voters that still embrace them are in that dead-end now, having led each other into it. Sadly until November, we will have no choice but to join them in isolation from Europe and the world.