Imagine if President George W. Bush had looked at the smoking ruins of the Twin Towers and told New Yorkers that we were on our own. 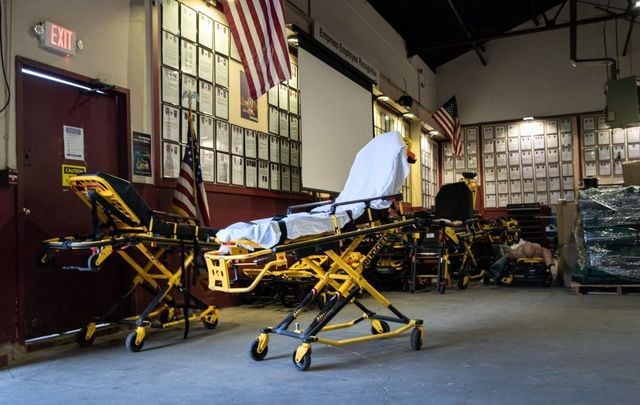 "It's the most staggering abdication of duty of any president or senate leader in the history of the country." Getty Images

Imagine if President George W. Bush had looked at the smoking ruins of the Twin Towers and told New Yorkers that we were on our own.

Worse, imagine that dismissal expressed in the language that we know Donald Trump and Mitch McConnell actually use when the cameras are turned off.

It's the most staggering abdication of duty of any president or senate leader in the history of the country. To not only deny the help New York needs, but to then to scold them for having the temerity to ask, these two are in a class of their own as leaders in name only.

Trump's daily briefings are increasingly composed of misinformation, happy talk, and outright lies. McConnell meanwhile has started openly scoffing at offering what he called "blue state bailouts," meaning he will not lower himself to help citizens in states with Democratic majorities.

“If there was ever a time for humanity and decency … and a time to stop your obsessive political bias and anger, now is the time" pic.twitter.com/ubq0ohqTIq

Read More: What New York City looks like in the eye of the COVID-19 storm

Here in New York City, we are living through what feels like a slow-moving terror attack. One New Yorker dies about every two minutes. Close to one million New Yorkers are suspected of having already been exposed to the virus.

As of Thursday evening, more than 11,200 people have died from coronavirus in NYC - more than quadruple the number of people who were killed on 9/11.

More transit employees have been killed by coronavirus in the past month than all of the police shot and killed in the past 40 years.

NBC News: The results of this initial antibody test indicate that over 1 in 5 New York City residents have had the COVID-19 virus. https://t.co/jsea2ZnaRy

Appallingly, to date only one percent of Americans have actually been tested for the virus, so the infection rate and the true death toll is likely to be two to four times the current estimate, with undercounts inevitably arising from lack of tracing.

The United States of American now has the highest number of Covid-19 in the world but it ranks second to last in testing per capita. Less than four million tests is a ridiculously small number of tests for 330 million people, representing just 1.2 percent of our population.

Almost 90 percent of the patients placed on ventilators here do not survive. Nationally, more than 50,000 have already died.

We cannot fight the coronavirus if we don't know where it is, who is transmitting it, where it is flourishing, and who it will likely infect.

Here in New York state, the government has stopped waiting for Donald Trump's White House to supply these vital tests, they have decided to make their own.

It used to be that the president took responsibility and control a national emergency. But Donald Trump only takes control of the news cameras and Twitter. We have a president who is interested in absolute power but zero responsibility.

I’ve had great “ratings” my whole life, there’s nothing unusual about that for me. The White House News Conference ratings are “through the roof”(Monday Night Football, Bachelor Finale , @nytimes) but I don’t care about that. I care about going around the Fake News to the PEOPLE!

Read More: President Trump only protects himself, not America

As he brags about his ratings, the governors, mayors, and local officials of the most affected states have simply closed their own schools and set their rules to keep their citizens alive and healthy.

As Trump assembles his daily dumb show on television, turning acclaimed scientists into toadying props, and calling on his most unhinged supporters to attack state governors over their city closure orders, it's been figures like New York State Governor Andrew Cuomo who have shown some actual crisis leadership.

The president of the United States on the head of the federal agency in charge of getting a vaccine to Americans: "I never heard of him" pic.twitter.com/7CFvsw0ArA

Under these increasingly bizarre circumstances, New York has been left to make up for the lack of support the president is showing for our state (the latest stimulus has nothing in its budget to help the city). So this week Mayor Bill de Blasio has announced a deal to send 100,000 additional tests per week to the city.

And what these tests are already showing us is that the positive rates here are so alarmingly high it's clear the United States hasn't done nearly enough to define the size of the outbreak, much less to identify, isolate and treat the infected.

Trump's complacency and refusal to act has led to well documented national shortages of testing, masks, medical equipment. For example, on April 10, New York City performed only 25 coronavirus tests. Twenty-five, in a city of 8.6 million people. It's the lowest volume since the pandemic started and it's a complete scandal.

As of this week, because testing is still so lamentably scarce nationwide, hospitals here are still instructing their medical staff to only conduct tests on patients who clearly require hospitalization.

That desperate directive skewers the results. We know that the at-home death rate in New York City has risen by forty percent, but since they were not tested, these deaths were not counted as Covid-19 related.

New Yorkers wake to the sound of ambulance sirens and they fall asleep to them now too. Our city is just a shadow of its former self, with almost empty streets, boarded up shops, bars, restaurants, malls, and theaters, basically everything that makes New York itself.

Over 45,000 people int he US have died. Twenty-six million people - one in five Americans - have now filed for unemployment. If this is the winning that Trump promised us, he can keep it.