Why, in the richest country in the world, are our doctors and nurses wearing bin bags and Marigold kitchen gloves and scotch taping plastic sheets to their faces in intensive care (and why are they even running out of those)? 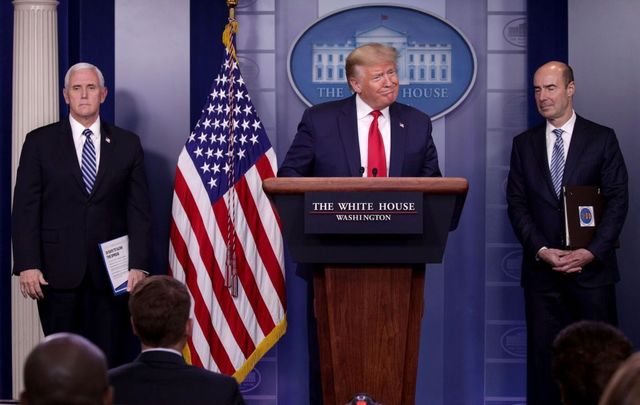 In four days the US is projected to have the world's highest coronavirus-related death toll. Getty Images

In four days the US is projected to have the world's highest coronavirus-related death toll.

I'll say that again, in four days the US is projected to have the world's highest corona death toll, surpassing China and Italy and Spain.

It doesn't add up. Why, in the richest country in the world, are our doctors and nurses wearing bin bags and Marigold kitchen gloves and scotch taping plastic sheets to their faces in intensive care (and why are they even running out of those)?

Why, when an ABC new report confirms the White House had intelligence about the virus in Wuhan in November 2019, is there still no comprehensive and coherent national response to the pandemic?

Why, if it comes to that, has not a single shipment of life-saving N95 masks reached an American port anywhere in the nation through the entire month of March?

In supermarkets and pharmacies here you still can't buy a protective mask, you can't buy toilet paper, or surgical gloves, you can't even buy Lysol or Clorox. This is America in 2020 remember, not ration-book England after World War Two.

There is still no national testing effort being made here, but vital medical protective wear and ventilators are being seized by the Trump administration then given or withheld in a mafia-style shakedown by the man who was actually elected to protect us all.

This drone footage captures NYC workers burying bodies in a mass grave on Hart Island, just off the coast of the Bronx. For over a century, the island has served as a potter’s field for deceased with no known next of kin or families unable to pay for funerals. pic.twitter.com/wBVIGlX6aK

Are you tired of all this winning yet? Is this what winning looks like to you?

"I don't take responsibility at all," Trump told the press on March 13, in words will come to define his presidency - and I suspect his adult life - when this unprecedented national nightmare finally concludes and the history books are written.

Watch this. Understand that Fox News didn’t just endanger its viewers by systematically downplaying Covid-19; they endangered you and your families by misleading people into dangerous and reckless behavior. Many people likely died because of Fox News. pic.twitter.com/b5e6PZhuh5

The coronavirus has now killed four and a half times the number of Americans who died on 9/11.

You would think that the conservatives who pursued endless congressional hearings for the four Americans who died in the 2012 Benghazi attack would be apoplectic over those numbers, but you would be wrong.

Let's be clear, the coronavirus pandemic is not Donald Trump's fault. But the lack of national preparation for the pandemic is.

He fired the entire national pandemic response team in 2018. He ignored the warnings of the Army, the CDC, the WHO and his own advisors for months when a rapid response was called for. He even ignored his own intelligence community who warned him in November of the coming pandemic.

Instead, he told us all for ten weeks that the coronavirus was a hoax. He told us not to worry it would all go away. Then he told us it was all under control. Now he's telling us it will kill at least 200,000 of us, even if we all stay home.

Drone cams have captured a potter's field being filled with the named or unnamed dead in New York City this week. Is this the fabled infrastructure week he promised us at last?

If I had my own newspaper this would be the headline:

“15,000 Americans die and the president doesn’t seem sad or helpful or interested.”

It's going to cost us all in ways imaginable and unimaginable, this catastrophe. But Trump's inability to lead us through and out of it will cost us more. For months now so many opportunities to get ahead of the pandemic were thrown away - as of today we now know the White House actually had five months to plan a response. They simply failed to.

New York City is now a ghost town where the silence is only broken by the next screaming ambulance siren. A New Yorker dies of COVID-19 every two minutes.

Trump is our commander in chief but he's AWOL. As late as last week, he was talking about opening the country and lifting the stay at home request by Easter Sunday. How can possibly he be so uninformed?

He can not make any plainer to us, he has simply abdicated the leadership role of the federal government. We are still as we have been since this crisis started, on our own.