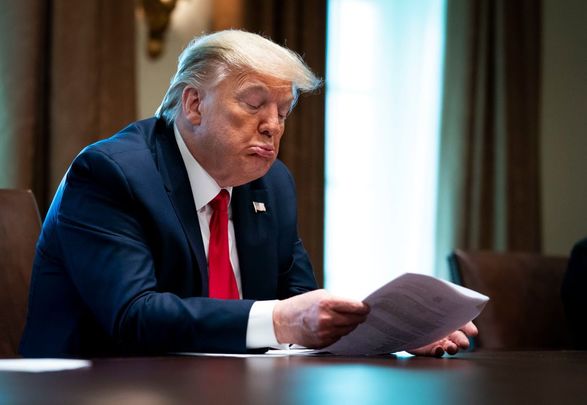 In an unhinged North Korea style press conference on Monday replete with propaganda films and cowering sycophantic underlings, Trump stunned reporters by claiming - completely erroneously - that as president he has the “ultimate authority” to reopen the U.S. economy when he chooses.

“My authority is total,” he told thundered, in the kind of abject power grab that has Constitutional scholars scoffing at his misplaced presumption.

‼️@CNN's @kaitlancollins tries to question @realDonaldTrump about his dictatorial claims: "You said when someone is @POTUS, their authority is ‘total’. That is not true....Who told you the president has the total authority?"

Scholars quickly reminded Trump he is a president, not a king, and that the framers anticipated his level of megalomania and planned to combat it in their original founding documents.

As the American public begins to grasp how completely Trump's administration has failed to prepare for or combat the coronavirus (the United States now has the highest number of COVID-19 cases in the entire world), his fury at being called to account for his failures resembles the increasingly deluded Margaret Thatcher toward the end of her own prime-ministership.

The United States just surpassed 609,000 confirmed coronavirus cases—by far the most in the world.

Trump’s chaos has a price. pic.twitter.com/Ohp7VUmVTv

Famously and presumptuously using the royal "we" to describe herself after the birth of her first grandchild, "We are a grandmother," she told the press in a headline that was quickly broadcast around the world.

The greengrocer's daughter had been prime minister for over ten years by that point, a lifetime in modern politics, and along the way she had somehow convinced herself she wasn't just England's prime minister, she was its monarch.

Eyebrows were raised, but the most dangerous ones of all were raised within her own party. That kind of grandiosity is fatal in a democracy, history teaches. When your leader starts sounding like a tinpot dictator or a monarch, it becomes your patriotic duty to oppose them - or lose the democracy you claim to cherish.

Trump's claim that he holds authority over all the states in the union has astounded legal scholars with its rank absurdity. “You won’t find that written in the Federalist Papers anywhere,” Robert Chesney, a law professor at the University of Texas at Austin, told The Washington Post this week.

It's a measure of how deeply spooked Trump is by this pandemic, the catastrophic death toll and the potential consequences for him come November, that he is resorting to these strong man tactics that on closer inspection are substance-less.

It's also sad for America that in the midst of this horrifying pandemic, we have a leader who will literally fire anyone or any organization that shows us all what we already know to be true: that our would-be emperor is entirely nude and exposed.