Micheál Martin was asked for his thoughts about the forthcoming centenary celebrations planned for Northern Ireland in 2021. 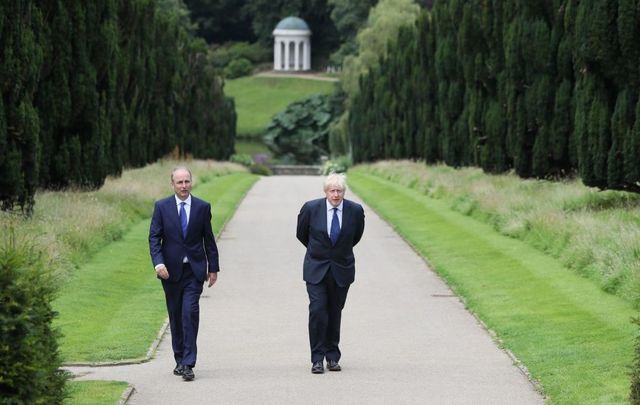 How do you celebrate the partition of a small island? How do you celebrate blatant gerrymandering to ensure the supremacy of one tradition over the other - which inevitably leads to oppression and eventually to the civil conflict that endured for decades, with a lamentable body count?

In what way will revisiting the events of 1921 in the North do unionism any favors if we are being honest? The background music to the violent partition was a blunt threat by the then Prime Minister David Lord George to Michael Collins to wage “immediate and terrible war” if he failed to sign the Anglo-Irish Treaty.

The northern statelet came into existence, on a wave of unionist orchestrated sectarian killing, unprecedented during that revolutionary period. Accompanied by massive sectarian expulsions from workplaces & wholesale destruction of nationalist districts.

That’s to be celebrated? https://t.co/4AYuxH5uqD

In the light of all this history, Martin punted so hard he could have a second life as a Venetian gondolier. “I've never been an advocate for a partition in my life and my party hasn't either, but we've moved a long way from 1921," he began, unpromisingly. Did he mean though time or in political attitudes? It was anyone's guess.

"That's what for the Good Friday Agreement is all about, transforming the narrative around the north-south relationship and it has done that. We actually have moved a long way from where we were in 1921 in terms of progress on the island of Ireland,” Martin continued.

“And in terms of shared institutions, the north-south bodies and in terms of common agendas like the single energy market, the promotion of the island on an all-island basis in the tourism perspective. We have far greater interaction north and south in business, sporting, and tourism dimensions, so the narrative have moved on significantly.”

Micheál Martin says the Good Friday Agreement has transformed the narrative around the North-South relationship. Centenaries are not about celebrating, but about trying to understand our past, he says. | Read: https://t.co/0xaERlnJCG pic.twitter.com/g771WzjcDV

The narrative? Who's narrative? The DUP's? Fianna Fáil's? Tourism Ireland's?

“Centenaries to me are not about celebrating, but about trying to understand our past and bringing us to a shared understanding of that past.”

Not about celebrating? I think anyone who knows the DUP or Ulster Unionism knows that the centenary will be a year-long, full-throated, flag-waving, red white and blue bunting hoisting, party. Martin knows that himself, which makes this inoffensive word salad so completely disingenuous.

“As a teacher in the classroom I never sought to proselytize, I always wanted students to question why things happened in certain ways, to learn from that, and gain their own understanding and insights,” Martin continued.

But you're not a teacher in a classroom now, you are the Taoiseach of the Republic of Ireland. What possible harm could there be in outlining why most nationalists will take a different view of the centenary to unionists?

Partition was imposed by London under threat of "immediate and terrible war" and in subversion of the democratic will of the Irish people, expressed in 1918, for national independence. Majority-nationalist councils in north that declared loyalty to Dáil were violently suppressed. https://t.co/oz8DTG3zyU

“I come from a political party with a very rich tradition and history emanating from the War of Independence period but we have never felt the need to own that or write our exclusive narrative about that and none of the parties should either,” Martin continued. “The past belongs to no one party, it belongs to no one tradition on this island, so therefore we should use the centenary as a means for developing a better understanding.”

Hand across the Boyne then, or close your eyes and skip the pogroms? Some will argue the Taoiseach demonstrated commendable restraint and perspective, but others might suggest he whistled right past the graveyards, contradicting his own search for a deeper engagement with the actual history and leaving the real history he claims to revere at the door.

That’s an absolute dumpster fire Micheál Martin has created for his partners in the SDLP.

They’re going to have to come out & allay fears that their councillors are going to be voting for celebratory events to mark partition.