A Future for Fiadh seeks to send Fiadh O'Connor to Memorial Sloan Kettering in New York City for experimental treatment as she battles an aggressive form of neuroblastoma. 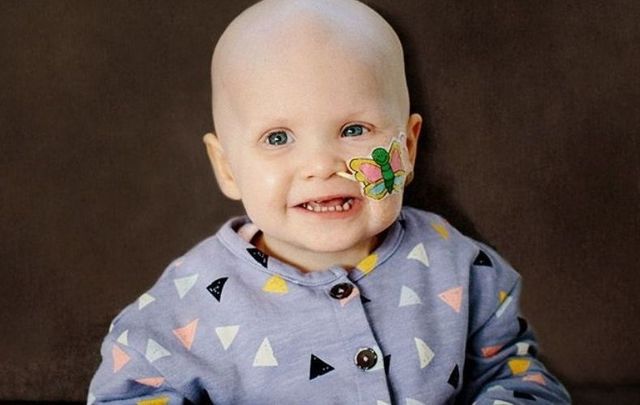 Wexford couple Laura and Rory O'Connor, both 37, saw their lives change dramatically last December when a bump on their two-year-old daughter Fiadh's tummy turned out to be an aggressive stage four cancer.

Now the Irish couple is appealing for help to have little Fiadh treated at Memorial Sloan Kettering hospital in New York City. The estimated cost of treatment for the toddler is an astounding $443,043, but with help from individual donors and celebrities in Ireland, the family has already raised approximately $327,129 of the final sum.

Because the cancerous tumor, called neuroblastoma, had spread to her bones and lungs, the brave little girl had to endure 50 days of chemotherapy, 30 blood and platelet transfusions, and three months of isolation over the past 10 months.

The treatments to date have been successful, but now the family wants to bring their daughter to Sloan Kettering in Manhattan to undergo a new cancer treatment that could stop it from ever returning. Their concern is justified as relapses in a neuroblastoma case have a notably low survival rate.

Speaking from Ireland, Maeve O'Connor, 37, Laura's cousin, told the Irish Voice, “Laura is a primary school teacher and herself and Rory were married two years before they had Fiadh. They really wanted kids. Fiadh's was a difficult enough pregnancy but they got her, and to be honest it was like a dream come true. They then went to have a second child called Paidi. And when Paidi was 12 weeks old and Fiadh was only 20 months old, Laura noticed the swelling on Fiadh's stomach.”

Laura's daughter had always been so robust and her diet was carefully monitored by her doting mother, so this development came out of the blue.

“Laura is the kind of mum who never gave her kids sweets and chocolate or anything like that,” explains Maeve. “She wanted to give her children the best start in life, which included nutrition.”

After the decision to bring Fiadh to the doctor, things cascaded. “He said, ‘You need to go straight down to Wexford General Hospital,” Maeve continues. “Once there the scan showed a large mass in her abdomen and they referred her immediately to Crumlin Children's Hospital in Dublin.”

It was the week before Christmas 2019. “The test came back and it was cancer. And it was the worst kind of cancer it could possibly be, a neuroblastoma that had invaded her bones, bone marrow, lungs and was pressing on her liver and bowel,” Maeve said.

Already stage four by the time it was found, it was the worst possible diagnosis that could have happened, so the conversation on that day was Laura and Rory deciding they couldn't wait, they would start treatment immediately and throw everything they could at it.

“Her resilience is amazing,” says Maeve.

“Her mother is a deeply private person, she doesn't even have a Facebook page. But she's the warmest kindest person, and all these GoFundMe appeals are just not her at all. To get to a point where they have to go and tell their story to the public has been an incredibly difficult process for them. And that's why the rest of the family like myself want to do all we can to help.”

Maeve says she has been completely blown away by Irish people's generosity.

“Ireland is in a lockdown at the moment. We're not allowed to travel more than five kilometers from home. An awful lot of people's jobs are literally stopped because the restaurants and bars are closed and we're out there looking for money, you know? We thought it was going to take us months to raise funds. Instead it has taken weeks and people have just blown us away,” she adds.

“I don't think there are adequate words to say how touched we are and how overwhelmed we are as a family to see what people have done to help and share our story. Everyone from rugby stars to football stars, to people working in fashion and beauty. It's been amazing to see how much people will contribute and, how many people will actually help us get the word out there.”

Fiadh's had every kind of cancer treatment that she can receive in Ireland now. The Sloan Kettering treatment in New York will find any remaining cancer cells in her body and eliminate them.

“This is why we're calling the fund a Future for Fiadh, because it is giving her the future that she really deserves. We only have one chance to make this work. And that's why we're trying to do this,” says Maeve.