Zac Connolly, 11, from Nova Scotia in Canada, is suffering from untreatable neuroblastoma - one of the most common forms of cancer in young children. 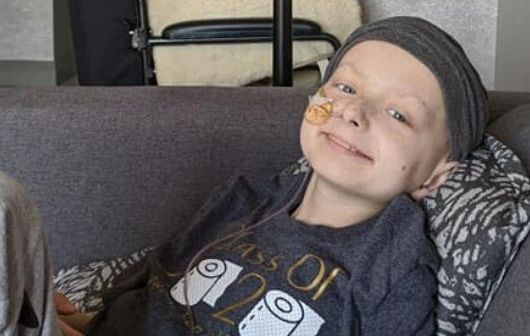 A terminally ill Irish Canadian boy with a passion for Geography is appealing for pictures and postcards from all over Europe so he can go on a virtual tour of the continent.

Zac Connolly, 11, from Nova Scotia in Canada, is suffering from untreatable neuroblastoma - one of the most common forms of cancer in young children.

He had previously fought and beat stage four neuroblastoma as a two-year-old but suffered a relapse last year. Doctors tragically told his parents that the cancer was no longer responding to treatment and that treatment would no longer be helpful in his fight against the illness.

He was due to fly to Scotland and other parts of Europe as part of the Make a Wish Foundation, but that didn't happen due to the COVID-19 pandemic and his declining health.

Since doctors are unsure of how long Zac has left and due to the uncertainty surrounding the COVID-19 pandemic, his parents have come up with a heartwarming way for him to see the world.

His parents asked friends and family members to send him their pictures of Europe in response to the cancellation and the idea has snowballed from there.

Nettie Connolly, Zac's grandmother, put out an appeal for postcards on Facebook and more than 3,000 people have shared it.

People have been sending him pictures and postcards from scenic locations around the world and the 11-year-old is loving it.

Zac's parents have now set up Zac's Virtual World Tour on Facebook to facilitate the large number of people that want to send him postcards. There are almost 2,000 members in the public Facebook group.

But Zac would still be delighted if people sent him actual postcards as well as part of his virtual world tour.

People wishing to send the 11-year-old a postcard should send them to:

Zac's mother Angela Connolly told the Daily Record that the response was "touching and heartwarming."

She said that her son is "an amazingly bright 11-year-old" and thanked Upper Rawdon community members and strangers from around the world for their "astounding" support.