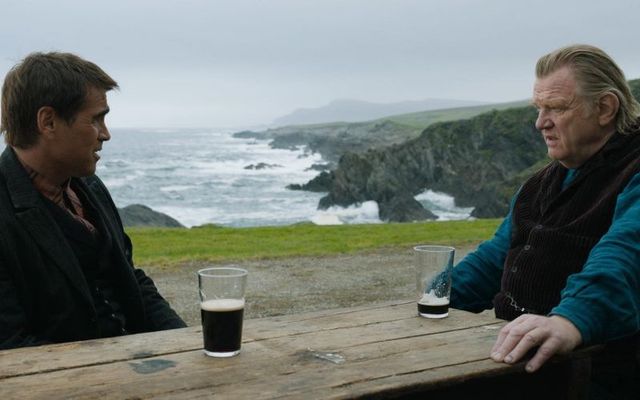 You could write the premise of Martin McDonagh's new film "The Banshees of Inisherin" on a napkin and perhaps he once did.

As film plots go, it's notably thin: one day a pair of old friends find their years-long friendship dramatically sundered when one decides he no longer likes the other one.

So far, so simple. The old friends in this case are Padraic (Colin Farrell) and Colm (Brendan Gleeson) and their story begins when Colm says that he no longer wants to see or hear from Padraic again.

This suddenly enforced isolation is made worse by the fact they both live on the remote and lonely (fictitious) island of Inisherin in the west of Ireland, where a little daily companionship is all that stands between you and jumping in the river.

The first thing to say about the resultant new film is that Colin Farrell deservedly won the Best Actor award at the Venice Film Festival. Frankly, his performance here is Oscar-caliber.

As the unceremoniously dumped former friend, his hangdog face is a portrait of devastation, made worse because there doesn't appear to be a good reason for the sudden severance.

From the moment he appears, it's really Farrell's film, which is remarkable when you consider who he's up against, and he has rarely been better on screen. He's so convincing in the role of jilted best friend that he sells this flimsy plot-line almost until the final frame.

As Colm, Brendan Gleeson plays a man who has become acutely aware of the short time left to him to achieve his ambitions, time he now believes would be better spent with his artistic pursuits (he's a sought-after fiddle player and composer) than listening to Paudraic's “dull” observations about his daily life.

“Are you coming to the pub, it's two o'clock!” Padraic asks Colm on the fateful day that Colm will announce that he won't be going anywhere with him, ever again.

The little joke about having pints at two in the afternoon is pitched for international ears not Irish ones, presumably. Ah, those Irish and their afternoon pints, they are certain to chuckle.

Soon the lens fills with Celtic crosses, women in shawls, miniature donkeys, turf fires, and thatched cottages, all of them Father Ted-like throwbacks to the last century where McDonagh's characters and attitudes are often visibly more comfortable. 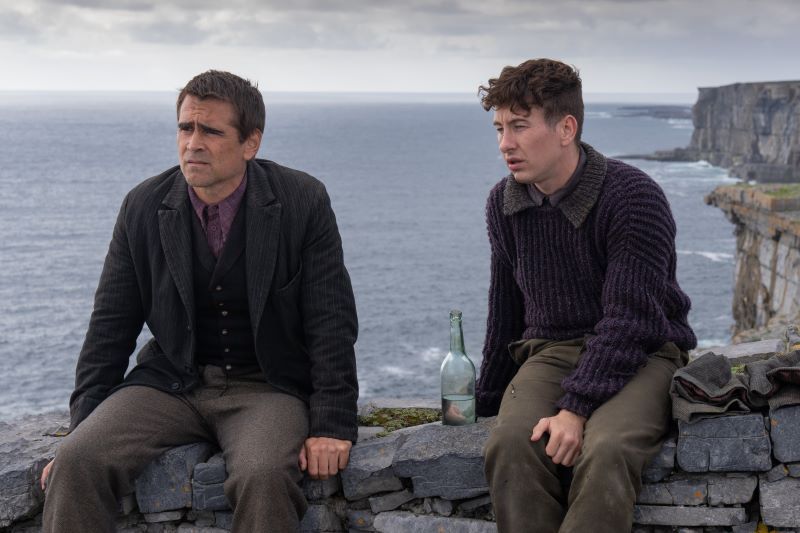 Barry Keoghan also makes a welcome appearance as Dominic Kearney, a so lonesome he could cry young local man who has been brutalized and abused by his bullying father, telling us more about the violence hidden just beneath the placid face of this remote island.

But Keoghan makes far more of his lonesome character than just supplying us with some local color, he makes this basic outline come richly to life to do more than just comment on Padraic's plight. It's a reminder of how talented Keoghan is because there's a James Dean-like intensity to his performance that elevates the whole film every time he appears.

“What are you? Twelve?” he asks when he hears that Padraic has been dumped by his former friend. It's a good question and one that "The Banshees of Inisherin" takes its sweet time answering.

But how you feel about the film's flimsy central premise will possibly decide if it's interesting enough to spend about two hours in the theatre teasing out. In my own case, I found my investment in their predicament flagging as I guessed where it might all be heading. If you're looking for "In Bruges, Part Two," this isn't it. 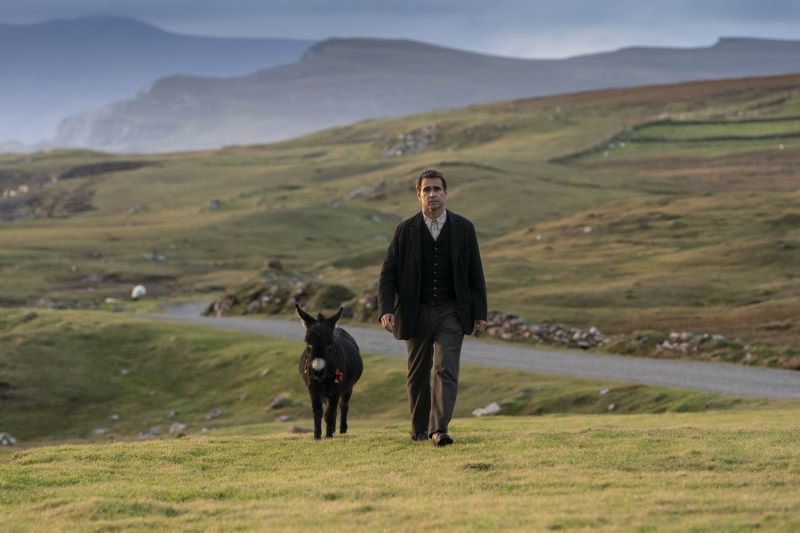 Farrell carries the film by investing so much pain into his mortally wounded character. He has nothing to do on his godforsaken – but astoundingly beautiful – island other than brood on the end of his friendship and this he does from the first to the final frame.

Insofar as we join him in this journey, it's all based on his ability to sell this plot line, which few other living actors could do this authoritatively or this well.

Gleeson is the other, more mysterious part of this enterprise. We don't really understand why he abandons his former pal so cruelly, despite his glib explanations, and it seems at times he doesn't himself.

Is it a later-in-life desire to strip himself of distractions? Is it that he can no longer endure the dull conversation of this nice but uninteresting man? Is it, as his parish priest asks, to silence some kind of romantic interest? Or has he simply just changed his mind?

The film asks all of these questions, firmly dispensing with the romantic one, then the distraction one, with ever-diminishing returns as the options are taken off the table.

This is an interesting theme but McDonagh's impulse is always to reduce rather than expand on our understanding of what is really happening. References to the civil war and the severance of the nation underscore the severance between the men, but it never really coheres into a satisfying comment on either Irish history or their individual relationships. 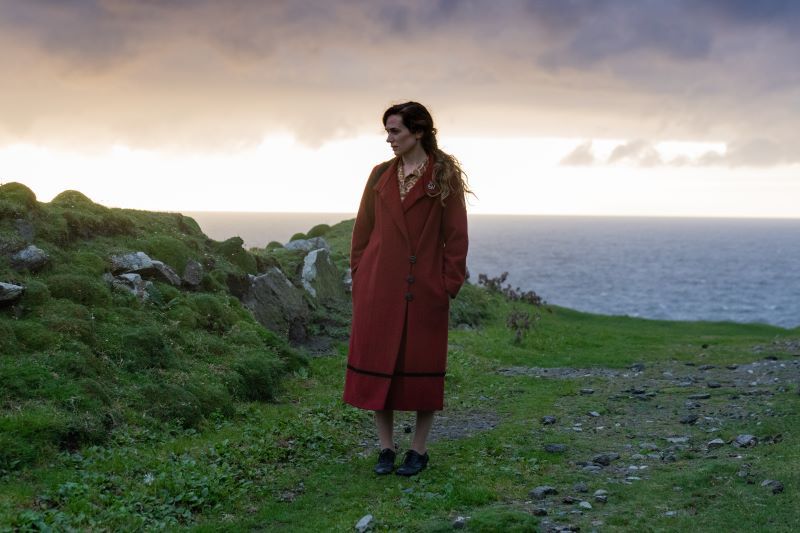 For this reviewer, the eventual revelations on screen were often surpassed by the revelatory power of the performance given by Irish actress Kerry Condon, who is one of the most accomplished actresses I have ever seen on stage or screen.

Although her character rarely passed the Bechdel Test (where a film has to have at least two women in it, who talk to each other about something besides a man,) Condon is clearly a once-in-a-generation screen talent who can hypnotize the viewer in every scene she appears in. She's so good she seems to belong to a better, more capacious film.

The film's final act is it's least satisfying. McDonagh pulls the loose strands of the story together in a conclusion that's sour, flat, and sad. This betrayal may be the best we can ever expect of life and each other, the film says. Cue darkness.

This is fine, as far as that goes, but it seems like a flat note to conclude on after two hours of John Ford western-style buildup. Is there to be no final big shootout? No guns blaring high noon? Just whatever this - deflated and deflating - the ending is?

In the end, "The Banshees of Inisherin" is about the sadness of lost love. The pain of it, the incredulity, the sorrow. It doesn't matter who it's between, the film reminds us. A man and a woman, or two men, or a man and a dog.

There is so little love in the world that its loss always matters. Except when it doesn't, in which case – as McDonagh reminds us here - all is already lost.

"The Banshees of Inisherin" opens in cinemas on October 21.