Veteran Dennis Hutchings is due to stand trial in September for the attempted murder of mentally challenged John Pat Cunningham in County Tyrone in 1974. 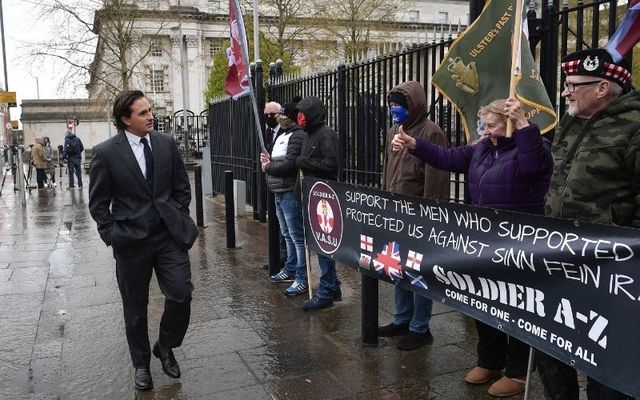 In yet another display of abhorrent British jingoism, hundreds of demonstrators gathered at Westminister in London to rally in support of Dennis Hutchings, an 80-year-old British veteran accused of fatally shooting a mentally disabled nationalist in the back during the Troubles.

Hutchings is due to stand trial in September for the attempted murder of John Pat Cunningham in County Tyrone in 1974.

Cunningham, who had the mental age of a child aged between six and ten, had a fear of men in uniform and was running away from a Life Guard regiment patrol led by Hutchings when he was shot dead on June 15, 1974.

Hutchings, along with three members of the Life Guard regiment, pursued Cunningham across a field and issued several commands to stop. When Cunningham continued to run in the direction of his home in Benburb, Hutchings and another member of the patrol fired several shots in his direction and shot him dead.

Hutchings and his colleague fired a total of five shots at Cunningham but were only questioned for five minutes by the RUC at the time. Each soldier declined to answer any question and the investigation was brought to an end.

However, Hutchings was charged with the attempted murder of John Pat Cunningham in 2015 after a fresh investigation was opened, leading a series of protests and rallies.

Hutchings, who attended Saturday's rally, has publically criticized the judicial process, while veteran's groups have rallied to his cause, arguing that no soldier should be charged for cases that took place more than 40 years ago. This is a poisonous position that completely overlooks the heartache endured by the families of victims who have been campaigning for decades.

Organized by Conservative MP Johnny Mercer, Saturday's rally was the latest in a series of demonstrations and protests over Hutchings' potential trial and a flagrant disregard for justice and law.

Mercer claimed in a tweet that Hutchings should not stand trial because he was involved in "something that happened 46 years ago" and because everyone else "present at the time" is now dead.

It was Dennis Hutchings 80th birthday yesterday, and he chose to spend it at a rally in Westminster. He is due to stand trial in September for something that happened 46 years ago in Northern Ireland. Everyone else present at the time is now dead.

At some stage, this will end. pic.twitter.com/y6VIb8TwTp

Mercer's tweet is revolting on several levels. Not only did he trivialize the callous murder of a mentally challenged man as "something that happened", but he also ignored the fact Cunningham was also present at the time and he is dead because of the actions of Hutchings and his colleagues.

Mercer vehemently argues that British soldiers shouldn't stand trial for their actions in Northern Ireland and traveled to Belfast last week after Soldier A and C - two former British paratroopers - were acquitted for the murder of IRA member Joe McCann in 1972.

Unsurprisingly, Mercer's tweet was met with a wave of support from British nationalists, who believe that serving members of the British Armed Forces are above the rule of law.

Meanwhile, others demanded that republican paramilitaries be subjugated to similar criminal trials in a shameless display of whataboutery.

The argument that British soldiers shouldn't be prosecuted because paramilitaries aren't standing trial for their actions during the Troubles simply doesn't stand up to scrutiny.

For one, British soldiers represent the British Government and were sent to Northern Ireland to protect British citizens. They should be held to much higher scrutiny than illegal terrorist organizations.

For another, paramilitaries on both sides of the political divide were routinely convicted for their crimes throughout the Troubles, although nationalists suffered at a far greater rate than loyalists. Hundreds of republicans were interned without trial on one day in 1971 regardless of whether they had any links to the IRA or not. Hundreds more were tried and convicted of crimes committed during the Troubles.

There were also incidents of wrongful convictions, such as the six innocent republicans who were arrested and convicted without any evidence over their alleged involvement in the Birmingham pub bombings in 1974. They were detained for 17 years until their convictions were quashed in 1991.

Absolutely no one is disputing the fact that terrorists who committed heinous acts of violence deserve to stand trial for what they did, but many have already served time for their actions and others can still be prosecuted.

At every turn, British soldiers benefitted from collusion, corruption, and incompetence, leaving bereaved families in Northern Ireland without any form of closure.

The family of John Pat Cunningham is one of those families and they deserve their day in court.

If there is insufficient evidence against Hutchings to convict him of the attempted murder as ardent British nationalists suggest, then the charges will be dropped and Hutchings will have cleared his name without subverting the rule of justice.

However, it is a very serious problem if Hutchings avoids a court date simply because he is a member of the British Army. No uniform should offer immunity from such a cowardly act of violence, especially when there is compelling evidence that Hutchings fired shots at Cunningham at the very least. As the leader of the patrol on the night in question, the veteran must also accept responsibility for the shooting in the interests of accountability.

Accountability, however, appears to be under threat with the British Government set to take unilateral action to give amnesty to British soldiers accused of crimes during the Troubles.

The Queen will reportedly announce the measures during her speech tomorrow, granting amnesty to soldiers who committed atrocities during the conflict in Northern Ireland and crushing any hopes of justice and closure held by the families of victims.

The measures will not apply to ongoing criminal proceedings, of which there are currently seven.

It is exceedingly important, therefore, that Hutchings stands trial for his role in the murder of John Pat Cunningham. The days when British soldiers could be held to account for their transgressions will soon be at an end and some justice must be administered before it's too late.