The Council of Europe will "supervise the ongoing measures to ensure that they are adequate, sufficient, and proceed in a timely manner" relating to the Pat Finucane case. 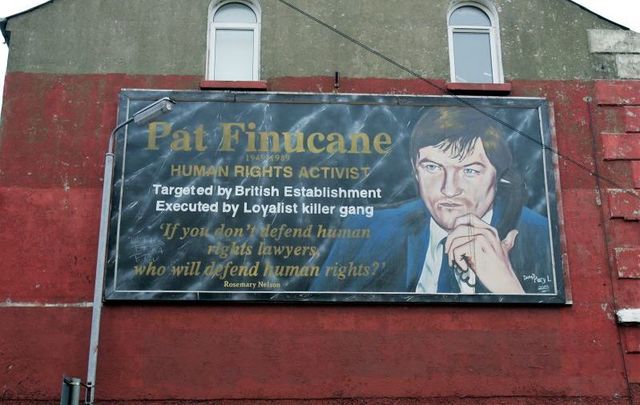 A mural featuring the murdered solicitor Pat Finucane on the Falls Road area in Belfast. RollingNews.ie

The investigation into the murder of solicitor Pat Finucane in his Belfast home in 1989 will be re-opened by the Council of Europe.

The Council of Europe said in a statement on March 11 that it had “decided to reopen their consideration of the individual measures in the case of Finucane in order to supervise the ongoing measures to ensure that they are adequate, sufficient and proceed in a timely manner."

It added that it has "invited the authorities to clarify how the ongoing police and OPONI [Office of the Police Ombudsman for Northern Ireland] processes will proceed promptly and in line with Convention standards given the issues raised by both of those bodies in recent statements.”

The Council of Europe consists of 47 member states, 28 of which are in the European Union, and oversees the implementation of judgments from the European Convention on Human Rights [ECHR].

Human rights lawyer Pat Finucane died on February 12, 1989, after he was shot 14 times by loyalist paramilitaries in his Belfast home in front of his wife and children. Separate independent reviews later found that the gunmen were acting in collusion with UK security forces.

In December 2020, the British government announced it would not be pursuing a public inquiry at this time into Finucane's death.

The decision by the Council of Europe this week was welcomed by the Finucane family. Pat Finucane’s widow Geraldine, who was also injured in the attack on her husband, said on Friday: “I am very pleased that the Committee of Ministers has made a decision to reopen their consideration of individual measures in the case of my late husband.

“In the context of expressing ‘profound concern’ at the ongoing delays in legacy cases generally, it is particularly significant that the Committee will resume supervision of measures by the UK Government in order to ensure they are ‘adequate, sufficient and timely’.

“A full, ECHR compliant investigation into the murder of Pat Finucane has still not been carried out. The UK Government has adopted a continuing policy of delay and obfuscation.

"The Committee of Ministers has run out of patience and, like me, is expecting action from the UK government. Supervision of measures will hopefully compel the UK Government to meet the obligations they seem unable or unwilling to fulfill.”

The Council of Europe has reopened the investigation into my father’s killing.

This is a hugely significant move.

The British govt have been criticised internationally for their failure to establish an inquiry & this level of scrutiny is vital to ensure truth can finally emerge pic.twitter.com/pQtQBHfWtm

Ireland’s Minister for Foreign Affairs Simon Coveney also welcomed the news. He said in a statement: “Ireland welcomes the decision being taken by the Committee today to reopen supervision in the case of Pat Finucane.

“The Committee will recall that it has been the consistent and firmly held position of the Irish Government that a full and independent public inquiry, as provided for under the Weston Park agreement in 2001, is the right way forward on this case, and the best way for the UK Government to uphold its Article 2 obligations.

“In 2019, the UK Supreme Court found that there had not been an investigation into the murder of Pat Finucane that was compliant with Article 2 of the Convention.

“In December, on the eve of our last meeting, the Secretary of State for Northern Ireland announced that he had decided against the holding of a public inquiry into the case at this time, and wished to allow the Police Service of Northern Ireland and the Police Ombudsman processes to move forward first. This position has been restated by the UK Government in their most recent submission to the Committee.

“The Irish Government expressed its profound regret in response to this decision at the time, and the Committee adopted an interim resolution with a view to considering whether to reopen the supervision of individual measures.

“It is important to note the statement by the Chief Constable of the Police Service of Northern Ireland that there are currently no new lines of inquiry in the case, and it is unlikely that the PSNI would be in a position to carry out a review of the case. The Police Ombudsman has also stated that the Finucane case is not central to any of its ongoing inquiries.

“As such, it is entirely appropriate and welcome now for the Committee to decide to take the next, necessary step and re-open supervision of individual measures in this case. This will facilitate full and thorough scrutiny of the steps to be taken in the period ahead, and to ensure that an inquiry that meets the United Kingdom’s obligations under Article 2 of the Convention is carried out.

“The Finucane family, like so many families, has been waiting for too long.”