Pat Finucane's widow and children have slammed the British decision not to pursue a public inquiry into the 1989 murder in Belfast as "insulting." 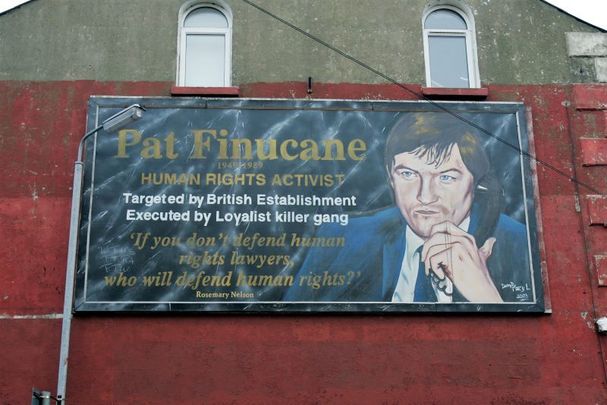 A Pat Finucane mural on the Falls Road area in Belfast, pictured in 2004. RollingNews.ie

Brandon Lewis, the Secretary of State for Northern Ireland, announced on Monday that the British Government will not be pursuing a public inquiry at this time into the murder of human rights lawyer Pat Finucane that occurred more than 30 years ago.

On February 12, 1989, 39-year-old Pat Finucane, one of the most high-profile human rights lawyers in Northern Ireland, was killed when masked gunmen knocked down the front door of his North Belfast home and shot him 14 times in front of his wife, Geraldine, and three young children. Finucane’s murderers were loyalist paramilitaries from the Ulster Defence Association, acting in collusion with British security services.

In a statement issued on November 30, the British Government said: “Following extensive consideration of all options available, the Government has decided not to establish a public inquiry into the murder of the Belfast solicitor at this time. A review process is being taken forward by the Legacy Investigation Branch of the Police Service of Northern Ireland (PSNI), and investigations being conducted by the Police Ombudsman for Northern Ireland are ongoing - both independently of Government.

“The Government has acknowledged the Supreme Court finding that there is yet to be an Article 2-compliant investigation into the death of Mr. Finucane, and has been working since the judgment was published to assess how best to address the specific findings of the Court.

“The Government has committed to re-assess whether a public inquiry is necessary to resolve any outstanding obligations under Article 2 of the European Convention on Human Rights in light of the police review process and Police Ombudsman investigations.

“The Government has also today published further details - not previously in the public domain - relating to the conduct of previous investigations into the Finucane case. A report of a review conducted by the PSNI in 2015 in light of the findings of the de Silva review has been shared with the family and will be published by the PSNI in the coming days.”

Addressing British Parliament on Monday, Secretary of State for Northern Ireland Brandon Lewis said in part: “The murder of Patrick Finucane was an appalling crime that has caused tremendous suffering. The UK Government is clear that the shocking levels of collusion in this case are totally unacceptable, and has publicly apologised that this took place.

“This case is sadly but one example of the violence and tragedy experienced by so many individuals and families during the Troubles, not just in Northern Ireland but across the United Kingdom and Ireland. It demonstrates the importance of ensuring that all families affected by the Troubles have an opportunity to find out the circumstances of their loved one’s death.

“We remain committed to working collaboratively with the Irish Government, the Northern Ireland parties, and civic society, including victims groups, in finding and delivering a progressive way forward on legacy to support NI in working towards a more positive future.”

The decision to not pursue a public inquiry comes after four political parties in Northern Ireland – Sinn Féin, the SDLP, Alliance, and the Greens – the Irish government, and 24 members of the US Congress had backed the campaign for an inquiry into Finucane's murder.

Lewis added: “I want to be clear. I am not taking the possibility of a public inquiry off the table at this stage. It is important that we allow the PSNI and Police Ombudsman processes to move forward, and that we avoid the risk of prejudicing any emerging conclusions from that work.

“I will consider all options available to me to meet the Government’s obligations.”

PSNI says it has "no new lines of enquiry"

After the address from Lewis, the PSNI’s Chief Constable Simon Byrne said in part: “The decision around the holding of a Public Inquiry is a matter for the Northern Ireland office and is outwith the statutory responsibilities of the Police Service of Northern Ireland.

“Due to the absence of any other solution for dealing with the past in Northern Ireland, the statutory duty for investigating deaths during the Troubles continues to sit with the Police Service of Northern Ireland. For this reason, the murder of Mr. Finucane rests within our Legacy Investigation Branches’ caseload. The Branches Case Sequencing Model routinely brings Troubles-related deaths forward for a review.

“Following the publication of the de Silva review in 2012, we established a review of the de Silva Report to assess if there were any outstanding actions for police. As a result of that review, we referred a number of issues to the Police Ombudsman for Northern Ireland. Four recommendations were also for the Police Service.

“We also made contact with those responsible for the conduct of the de Silva review regarding the material described by de Silva as ‘new and significant.’ Following consideration by the Public Prosecution Service, it was concluded that this material did not provide credible opportunities to pursue criminal investigations.

“The Northern Ireland Office recently wrote to us to ask if there were any outstanding matters in relation to the murder of Mr. Finucane. We confirmed that the case sat within in our Case Sequencing Model and it would be due for its review and that four recommendations for Police were outstanding following our internal review of de Silva.

“It is our view that there are currently no new lines of inquiry. We now need to decide if a further review is merited given all the previous investigations into this case. Once we have determined that, we will inform the Finucane Family. If we determine that a review should take place, we will then have to decide if we are best placed to carry out that review. As it stands it is unlikely that we would enjoy a perception of independence in this case, given the accepted position of State involvement in this matter. Therefore, it is highly likely that any review would need to be conducted independently.

“A review itself is not an investigation. Any decision to investigate would only be made following the review process. Again, it is likely that any new investigation would need to be independently led. We would also need to be satisfied that given the extensive work of Lord Stevens, Judge Cory, and Sir Desmond de Silva, that a further investigation has a reasonable prospect of furthering this matter either by bringing more persons to justice or answering the unanswered questions of the Finucane family and their ongoing search for justice.”

In a statement released by Pat Finucane’s sons Michael and John, Finucane's widow Geraldine said: “This proposal falls so far short of what is required in this case that it beggars belief. It makes a mockery of the decision by the UK Supreme Court and the forthright comments of Belfast High Court. It is yet another insult added to a deep and lasting injury.”

The British Govt has again refused to hold a public inquiry into my father’s murder.

Their response today was nothing short of insulting.

She added: “In failing to establish a public inquiry into the murder of Pat Finucane, the British Government have not only set themselves against my family but also the Irish government, local, national and international political parties, political institutions, legal and human rights groups domestically and internationally.

“The murder of Pat Finucane has been described as not just an attack on one lawyer but an attack on the rule of law itself. The Secretary of State has shown us today that the attack is continuing. They have clearly set themselves against the rule of law in ignoring the highest court of their own jurisdiction. They remain in breach of their international legal obligations, a shameful and inexcusable position for a sovereign government to take.

“They have again shown that they have no intention in admitting their role in the conflict here. Colluding with killers did not just result in my husband’s murder, but many others. The extent and depth of this political policy is what the British government fear being exposed. The outcome of our meeting today confirms that once again.”

Finucane's son John, who is a member of Sinn Féin and an MP for North Belfast, said that he and his family are "very angry" and slammed the decision as "insulting:"