100-year-old World War II hero and charity champion has sadly lost his battle with the coronavirus. 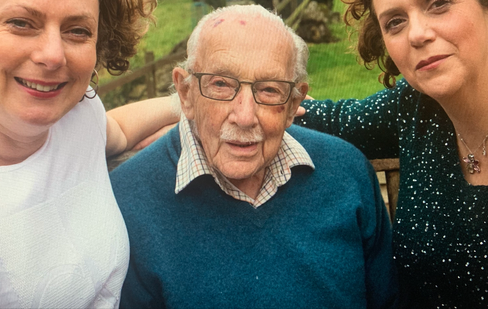 World War II hero Captain Tom Moore who raised £45 million for charity for his 100th birthday has sadly lost his battle with the coronavirus.

Captain Tom, who raised over £45 million for the National Health Service (NHS) during the pandemic by doing laps of his garden, was 100 years old. The former army officer managed to do 100 laps of his garden before his 100th birthday in what was initially meant to be a small fundraiser but quickly turned into a global cause.

Captain Tom's commitment captured the hearts of everyone in the United Kingdom and beyond, and he became a global phenomenon, eventually receiving a knighthood from Queen Elizabeth II herself during an open-air ceremony in the summer last year.

In what would turn out to be his final trip, Sir Tom spent the Christmas period in Barbados with his family.

"We are so grateful that we were with him during the last hours of his life; Hannah, Benjie and Georgia by his bedside and Lucy on FaceTime. We spent hours chatting to him, reminiscing about our childhood and our wonderful mother. We shared laughter and tears together. The last year of our father’s life was nothing short of remarkable. He was rejuvenated and experienced things he’d only ever dreamed of."

Following news of Tom's coronavirus diagnosis, well wishes towards the man flew in from all corners of the world. Boris Johnson described how Sir Tom's ''Heroic efforts have lifted the spirits of an entire nation'' on Twitter.

I'm so sorry to hear that Captain Tom has passed away in hospital.

He was a great British hero that showed the best of our country & I send my best wishes to his family at this time.

No doubt tributes will continue to flood in for Tom Moore, who will certainly be viewed as one of the leading lights for the United Kingdom in the ongoing struggle with COVID-19.