Captain Tom Moore, 99, turns 100 on Thursday, April 30 and pledged to walk 100 laps of his garden before his landmark birthday. 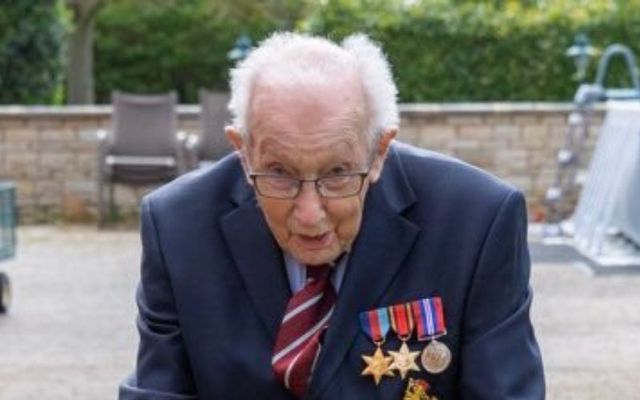 A World War II veteran has raised more than $15 million for the NHS in Britain in the fight against COVID-19 by walking 10 laps of his garden every day until he turns 100.

Moore has smashed his fundraising target and raised 12,000 times more than he set out to raise initially.

His JustGiving site crashed on Wednesday morning when more than 90,000 people visited the site to donate to help the NHS and the frontline workers in the fight against COVID-19.

The veteran soldier has made staggering progress in his challenge. He completed his 100th lap on Thursday, April 16 and was given a guard of honor by current members of the British military as he completed his final lap.

He's done it! ?#CaptainTomMoore has completed his 100 laps before his 100th birthday live on #BBCBreakfast! ?
He's raised over £12 million for the #NHS
Well done @captaintommoore from everyone at the @BBC ? pic.twitter.com/rtil8gKKmJ

However, he doesn't plan to stop now that he's reached his 100-lap target. He said that he would keep walking for as long as people keep donating to his cause.

Moore said he never expected to raise anything close to the amount of money he has raised so far.

"At no time when we started off with this exercise did we anticipate we'd get anything near that sort of money," he told the BBC's Victoria Derbyshire.

He appeared on a number of British chat shows, including Good Morning Britain and BBC Breakfast, which seems to have worked wonders for his incredible campaign.

Moore served for the British army in Myanmar and India during the Second World War before he was deployed to Japan after the Japanese surrender in 1945.

British Health Secretary Matt Hancock said that the veteran was "inspiration to us all."

This amount of money will help the #NHS beyond what we ever thought was imaginable.

Thank you to everyone that’s helped me get there. #walkwithtom #TomorrowWillBeAGoodDay