Jamie and Mairead Keane are raffling off their home with tickets costing just €11. 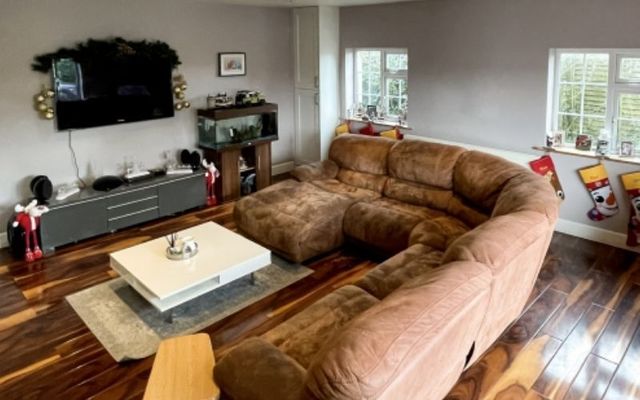 An Irish family is raffling their Wexford home for the most heartbreaking and endearing of reasons.

Jamie and Mairead Keane, who live in Ballyvelig in County Wexford with their three children Kyle, Max, and Ryan, are selling their four-bedroom bungalow via raffle which costs just €11 to enter.

The couple are expecting a fourth child so need a more spacious house, but there is an altogether more devastating reason for their decision to move home.

Mairead's father sadly passed away in 2020 following a battle with cancer, leaving behind his seven-year-old son Christopher, who has autism.

Christopher's mother died from sepsis in 2019, so Jamie and Mairead took him in after he was left orphaned in August 2020.

The couple said that both Christopher and his eldest son Kyle are autistic and said that the two boys needed their own bedroom due to their own "complex needs".

"Both Christopher and our eldest boy are autistic which means sharing a bedroom is not possible as they both have complex needs and require their own space," the couple wrote on Raffall.com.

"We are currently looking for a property which will accommodate all of us together happily that is more suited to all of our needs."

The couple said that Christopher has struggled to understand why his parents were not there anymore and said that they decided it would be in Christopher's best interests if he moved in with their family as he could continue to go to the same school.

"Losing so much in such a short period of time has been very hard on him and we didn’t want any more disturbances in his life as he really loves going to school there," they said.

"He is so kind-hearted and loveable. He is only seven years old and already he has gone through a huge amount of grief not once but twice in the past two years to the most important people in his life his Mam and Dad."

With Christopher adopted into the family, their current home is no longer fit for purpose and the couple are raffling it off online where a lucky person could win it for just £10.

The four-bedroom house has been fitted with a host of modern appliances, including a corner jacuzzi bath, and would be perfect for any small to medium-sized families.

The house is situated close to a number of scenic Wexford beaches, while there are several other amenities close by, including Hook Lighthouse, the ancestral home of John F. Kennedy at New Ross, and Loftus Hall, one of the most haunted buildings in Ireland.

Wexford Town and Waterford City are also within short distances of the stunning bungalow.

The raffle will end on April 18, 2021, at 11 p.m. Irish time or when 40,000 tickets are sold, whichever comes first. Jamie and Mairead will be covering the stamp duty and legal costs.

Additionally, 5% of all proceeds will go towards the Cottage Autism Network charity.