The woman was removed from the EasyJet flight while it was still on the ground in Belfast before departing for Edinburgh. 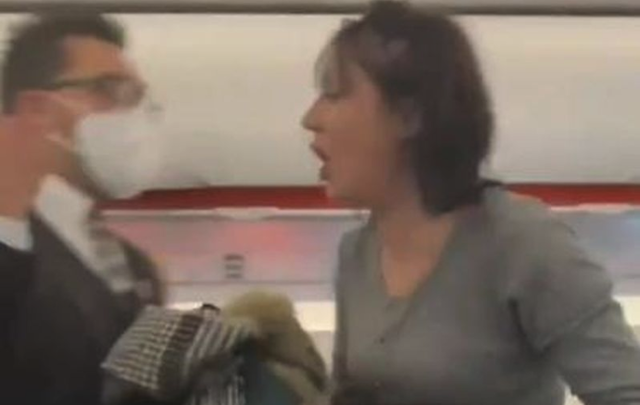 Woman with a Scottish accent arrested in Belfast. Twitter

A woman was removed from an EasyJet flight at Belfast International Airport for refusing to wear a face mask, coughing, and shouting "everybody dies" at the cabin crew.

A woman was removed from an Edinburgh-bound EasyJet flight at Belfast International Airport after claims that she refused to wear a mask to protect herself and others from COVID-19, shouted "everybody dies," and fake coughed on board the aircraft.

The video posted on social media shows the woman swearing and shouting "everybody dies, you know that?...whether it's corona or not, everybody dies" as she collects her belongings and is shown off the plane by cabin staff. The woman also pretended to cough on passengers.

The original video was recorded by passenger Reuben Matthews, who wrote on Facebook: "Well done easyJet crew for dealing with this in a professional manner.”

A spokesperson for Belfast International Airport said: "Airport Police were called by ground staff due to a disruptive passenger within the terminal building at approx 16:35 on Sunday 18th October. The passenger was subsequently arrested and is currently under investigation.”

Like most other airlines, EasyJet requires masks to be worn for the duration of all flights due to the risk of the coronavirus pandemic.

A spokesperson for EasyJet told The Edinburgh News said the police were called to attend flight EZY481 from Belfast to Edinburgh on 18th October due to a passenger behaving disruptively on board and refusing to wear their face covering.

The spokesperson said: "In line with EASA guidelines, all passengers are currently required to bring their own face covering for their flight which must be worn during boarding and onboard, except when eating or drinking.

“Passengers receive clear communications before they travel and via announcements onboard to ensure they are aware of this requirement for the health and safety of everyone onboard.

"We will not tolerate disruptive behavior towards other passengers and crew."