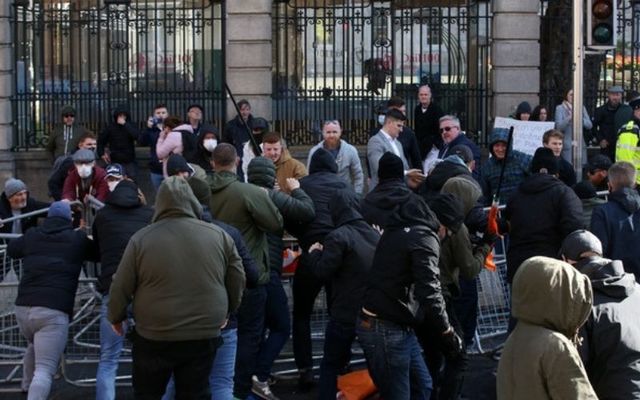 Two men were arrested at an anti-mask rally in Dublin on Saturday after far-right protesters clashed with counter-demonstrators outside Government buildings.

The far-right National Party organized a rally against COVID-19 regulations outside Leinster House at 1 p.m. on Saturday afternoon, but they soon were met by a group of at least 100 counter-demonstrators.

Gardaí are now investigating the organizers of both groups for potential breaches of public health regulations.

The counter-protesters gathered at the Shelbourne Hotel on St. Stephen's Green at 12:45 p.m. and began to march toward Leinster House via Molesworth Street, chanting "Nazi scum, off our streets" as they marched.

The group was flanked by several uniformed gardaí on bicycles while members of the Garda Public Order Unit remained on standby in the vicinity. A number of plain clothes gardaí also situated themselved among the crowd while the Garda Dog Unit and Mounted Support Unit were also in attendance.

The National Party demonstrators began to chant "Antifa" at the approaching counter-protesters and the groups then violently charged at one another, with dozens of protesters on both sides throwing punches and kicks.

Some protesters threw projectiles like nuts, bolts, and fireworks as they entered the fray and gardaí were forced to erect barriers to keep the two groups apart.

Members of the gardaí also formed a line between the two groups, forcing the counter-protesters back down Molesworth Street.

Counter demonstrators attempted to break through crowd barriers to confront a rally by the National Party protesting at Covid 19 restrictions #rtenews pic.twitter.com/42NKcTVVPq

The gardaí held the makeshift barrier as protesters on both sides furiously tried to get at each other, with some protesters attempting to bypass the garda barriers by taking an alternative route to Leinster House.

When a breakaway group of counter-protesters attempted to reach the National Party protest via Kildare Street, they were met by more members of An Garda Síochána who forced them back.

Two men, one in his 30s and the other in his 40s, were arrested for public order offenses, according to the Irish Times. It is not clear which group the men belonged to.

With the counter-protesters at bay, the National Party held a rally of about 150 people outside Leinster House, led by National Party leader Justin Barrett.

Barrett addressed the crowd with a megaphone, while counter-protesters formed a line of their own on Molesworth Street, preventing memebers of the public and the media from getting closer to the National Party rally.

The rally concluded at about 3 p.m., but counter-protesters continued to hold demonstrations near the GPO after the National Party dispersed.

The counter-protests were partly organized by Anti-Fascist Action Ireland, a group that describes itself as "militant".

"We believe in physically and ideologically confronting fascism," the group said.