The march has faced widespread criticism. Meanwhile, a senior HSE doctor has also faced criticism for suggesting that the coronavirus is "less severe" than seasonal flu. 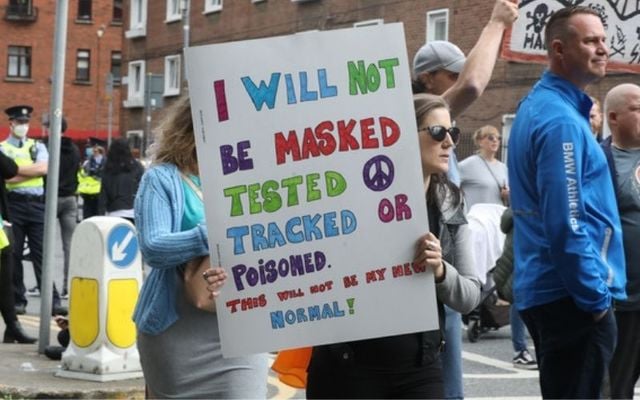 Around 2,000 far-right protesters marched through Dublin Saturday to protest the wearing of face masks during the COVID-19 pandemic while a senior HSE doctor has faced criticism for suggesting that the common flu is more dangerous than the coronavirus.

The march, organized by Yellow Vest Ireland, started at Dublin's Customs House at 2 p.m. before moving through the city. There were little signs of social distancing and hardly any marchers wore face masks.

Yellow Vest Ireland describes itself as a "people's movement" that is not attached to any political party or movement and many of its members carried signs bearing slogans like "take off your mask" and "it's only a common cold" during Saturday's march.

Marchers also chanted "What do we want? Freedom," as they moved through the Dublin streets.

Gardaí said that there were no reports of arrests or major incidents during the march, however, Sinn Féin TD Eoin Ó Broin, while condemning the march, said that a counter demonstrater had been assaulted by the group.

"These people aren’t patriots. They are thugs. Connolly & Pearse would be turning in their grave," Ó Broin wrote on Twitter. " Solidarity with @IzzyKamikaze."

These people aren’t patriots. They are thugs. Connolly & Pearse would be turning in their grave.

The demonstrator, known as Izzy Kamikaze, appeared to have been attacked by the anti-mask protesters in several videos posted to Twitter. Kamikaze was left sporting a badly bloodied face after the incident.

Kamikaze claimed that gardaí witnessed the assault and was disappointed that they had issued a statement suggesting there had been no incidents.

"Gardaí don't comment on videos???" They *witnessed* the assault! Will no journalist challenge them on a completely false statement? https://t.co/M2huQiVNKM pic.twitter.com/6CNQkM6fU0

Meanwhile, Dr. Martin Feeley, clinical director of the Dublin Midlands Hospital Group, claimed that the coronavirus is "much less severe" than the average seasonal flu and said that the Irish Government's COVID-19 restrictions were "draconian."

Feeley is calling for more low-risk people to be exposed to the virus so Ireland can develop herd immunity and he said that herd immunity should have been allowed to happen during the summer before the winter flu season.

"This should have been allowed to happen during the summer months before the annual flu season, to reduce the workload on the health service during winter months," Feeley told the Irish Times.

He said that the Government's attempts to curb the spread of the virus have had an adverse impact on other parts of life, and he argued that "you can't postpone youth".

"The financial cost can be seen in any walk or drive through cities, towns and villages. Mortgage repayments and other financial setbacks are virtually all suffered by the young worker or business person and not by the over-65, who are guaranteed their pension, as indeed are the salaries of the individuals who decide to inflict these draconian measures," he told the Irish Times.

The senior HSE doctor also condemned the media "obsession" with the virus and claimed that mainstream media had contributed to the hysteria surrounding the pandemic by fixating on the number of newly-diagnosed cases rather than the number of critical cases and hospitalizations.

"Opening a newscast with the number of people testing positive for a condition less dangerous than the flu, which many don’t even know they have, is scaremongering."

Feeley did note that he believed the Irish Government was correct to implement lockdown measures at the initial outbreak of the virus but said that such measures were now unnecessary since doctors know more about the coronavirus than they did six months ago.

The HSE has since rejected Feeley's claims that the coronavirus is less severe than seasonal flu and moved to disassociate itself from his views.

Dr. Colm Henry, the HSE's Chief Clinical Officer, said: "For the avoidance of any doubt, the position as stated by Dr. Feeley in the Irish Times today is not the position of the HSE on this important subject."

The HSE added that the coronavirus is a novel virus and that there is still no vaccine for it, while there is a vaccine available for seasonal flu.