Sinking USS The Sullivans to get boost from New York Hibernians

The Ancient Order of Hibernians (AOH) is calling upon Irish Americans to “stick together” to save the historic USS The Sullivans, named in honor of the five Sullivan brothers killed during WWII. 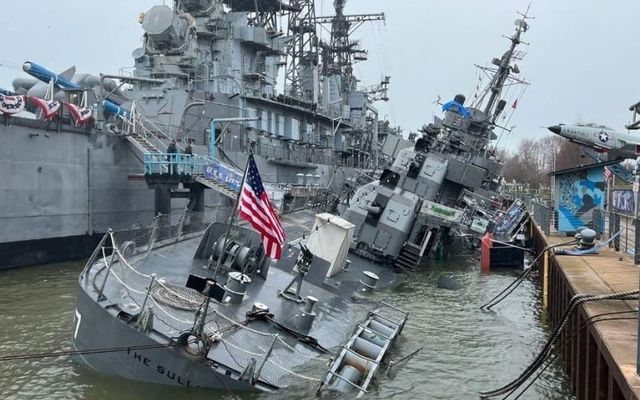 In response to news that the USS The Sullivans is sinking at The Buffalo and Erie County Naval and Military Park where it had been on display as a museum, the New York Ancient Order of Hibernians (AOH) has launched a fundraising drive to help save the ship.

USS The Sullivans (DD-537) is a decommissioned WWII US Navy Destroyer dedicated to the five Irish American Sullivan brothers who lost their lives during the Naval Battle of Guadalcanal on November 13, 1942, while serving during WWII. The Sullivan family's loss was the most extensive loss by any one family in WWII. 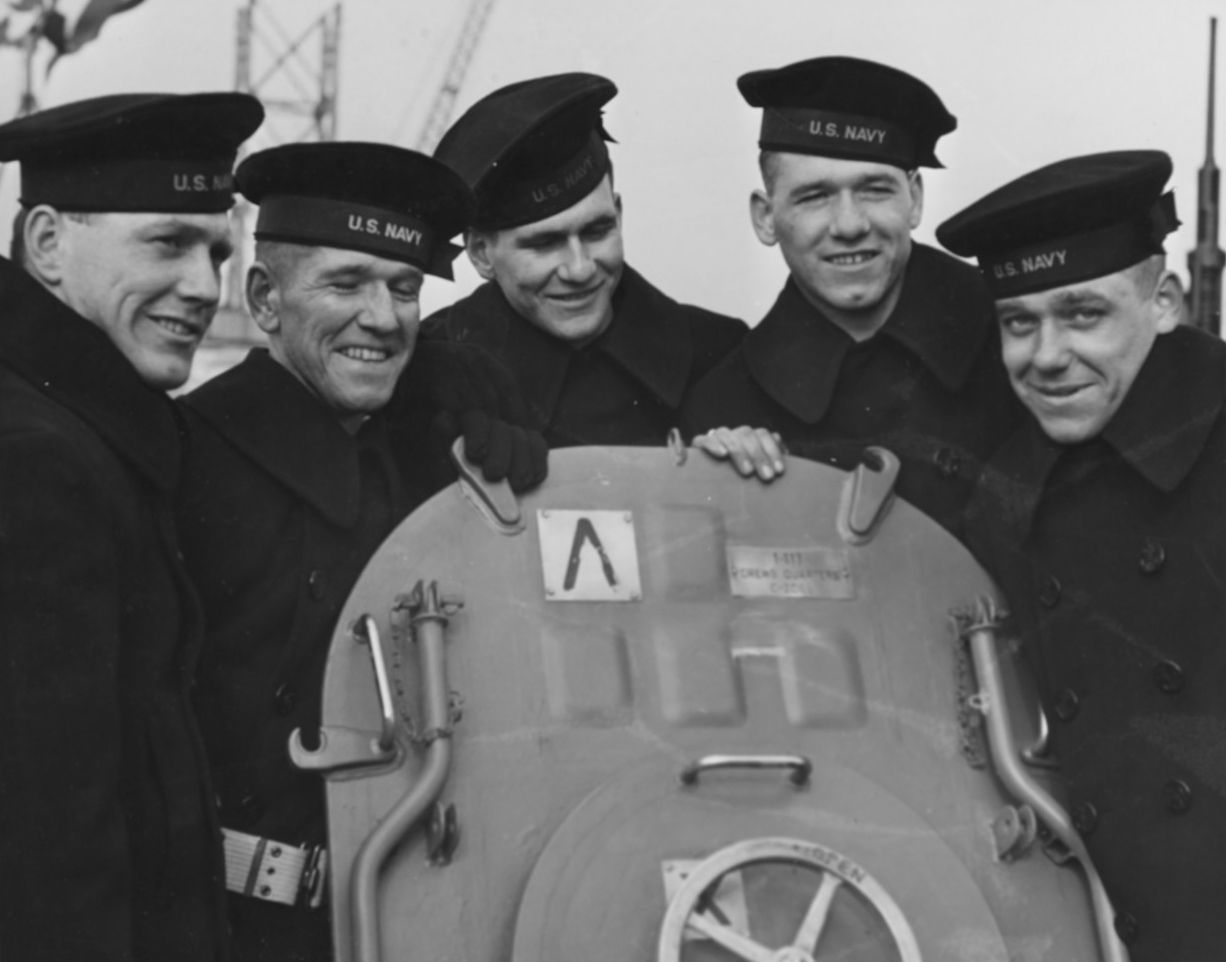 The New York State Ancient Order of Hibernians said in a statement issued on April 18 that it was "shocked" by the "heartbreaking" images of the decommissioned USS The Sullivans sinking in upstate New York.

"To think that this vessel that survived the major battles of the Pacific in WWII should now sink in N.Y. due to neglect is inconceivable," the NY AOH said.

Our @ErieCountyESU is on site at the @BfloNavalPark assisting the Park with the listing of the USS Sullivans. A request has been made to the NYS Office of Emergency Management for special pumps. pic.twitter.com/hFAw5cOJfS

The NY AOH statement continued: "While USS The Sullivans should hold a position of respect for all Americans, it has a special place in the hearts of Irish Americans. USS The Sullivans was the first ship in the United States Navy to be commissioned in honor of more than one person. It commemorates the service and sacrifice of the five Irish American Sullivan brothers [George, Francis, Joseph, Madison, and Albert] who refused to be separated when volunteering to serve in WWII, stating, 'we stick together.'

"They served together on the USS Juneau until she was sunk during the battle of Guadalcanal, resulting in the death of all five brothers. The Sullivan family sustained the most extensive loss in combat by any one American family during the war. The Sullivan brothers are symbolic of the best traditions of service to family and nation that have been the hallmark of Irish Americans.

"It is reported that it has been known since 2018 that USS The Sullivans needed repair to its hull due to its age and the effects of winter conditions at its mooring place in Buffalo, NY.  We are grateful for the hard-working volunteers, including our own brothers of AOH Division 1 in Buffalo, who have raised private funds to restore USS The Sullivans, and to Congressman Brian Higgins, who announced just ten days ago that he had secured a federal grant of $490,000 in federal funding to support the needed repairs.

We joined local veterans at the @BfloNavalPark to announce $490K in federal funding to support the preservation of the USS The Sullivans.

Secured in the FY22 budget, funding will complete critical repairs to ensure that the 80 y/o landmark stays afloat for many years to come. pic.twitter.com/tKE8BjQD22

"Yet, at the same time, as Americans and Hibernians, we have to ask how this sinking of USS The Sullivans was permitted to happen? The ship has been designated as a U.S. National Historic Landmark and is listed on the U.S. National Register of Historic Places. As a national landmark dedicated not only to the five Sullivan brothers but to the countless sailors who served heroically on USS The Sullivans for over 23 years, how can we so fail in our duty of remembrance and have reached this point of crisis for a problem that has been known for four years?

"The loss of USS The Sullivans is not an issue confined to Buffalo or New York; it is a debt of gratitude owed by all Americans. The apparent broader reluctance to pay this debt should raise questions about our society’s priorities.

"The emblem of USS The Sullivans featured the shamrock and the motto of the Sullivan brothers, 'We stick together.' It is time for us as Hibernians and Irish Americans to 'stick together' and ensure that this important piece of American history is not lost. 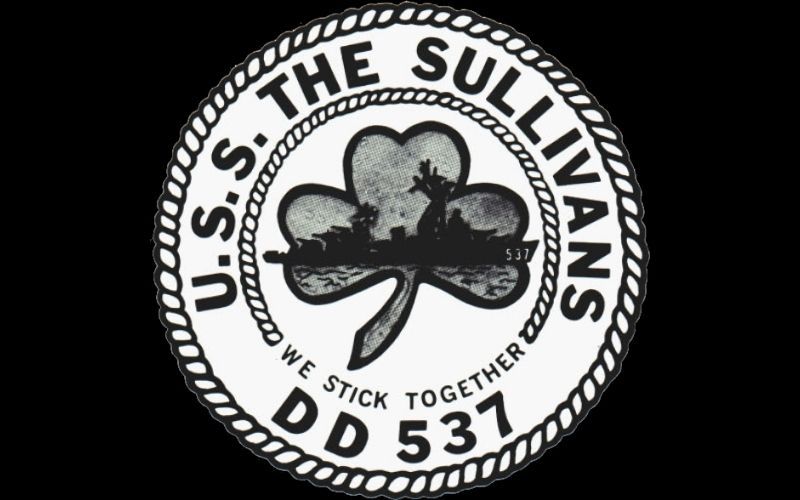 "We are reminded that recently that, neglect and lack of funding claimed the USS Barry, named for Wexford immigrant John Barry, the first officer of the United States Navy, which was deemed irreparable and recently scrapped. We cannot let such apathy claim USS The Sullivans.

"The New York State Ancient Order of Hibernians is launching a fundraising campaign to ensure that the memory of the sacrifice of the Sullivan brothers is not claimed by tide and apathy. Donations can be made directly on this website and will go towards the preservation of this majestic and historic vessel.

About The Ancient Order of Hibernians

Formed in 1836, the Ancient Order of Hibernians is the largest Irish American organization in the United States with membership in all fifty states.